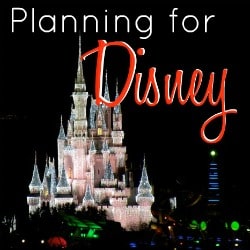 My family is in the “Do” category for several reasons.  1)  My kids love wearing matching shirts and getting extra attention from the cast members.  One year, we wore shirts based on our then home state of Missouri.  The shirts read “Show Me…the Mouse”.  Alice even hung off the parade float to tell us where Mickey was.  2)  It is much easier to see matching kids in brightly colored shirts running away from you toward the nearest Character Meeting spot in a sea of kids wearing white or grey.  3)  I will never forget seeing a lost child during one trip to Walt Disney World.  The child was so scared, and the cast member was trying to get the child to tell him what his parents were wearing.  The child could not verbalize what his parents were wearing, so the cast member asked the child if his parents were wearing shirts like his own.  Evidently, they weren’t.  In matching shirts, my DS7 with sensory issues won’t have to verbalize what I am wearing.  He can point.

We have done several different kinds of t-shirts over the years.  The first two trips that we made, we had shirts printed at a sporting goods shop.  That got really expensive very quickly!  The third and fourth trips, I made painted shirts by hand, including writing.  This was extremely labor intensive!  Last trip, I got iron-on transfer paper.  I had used this method before but had been unhappy with the results.  The ladies on DisBoards raved about a certain kind of transfer paper, so I ordered it.  I must say that I must have gotten a bad batch because it wouldn’t stay on very well, and if we weren’t careful, it would pull off in sheets.

When I was planning our last trip, I couldn’t spend an arm and a leg.  I still wanted something that would last, though.  I thought and thought until I came up with an idea.  I tried it out, and it looks pretty good, so I want to share this with you.

I used shirts from Michael’s and JoAnn’s.  Both stores will frequently have sales with prices of $2.50-$3.00 a piece.  Other than that, I used spray paint, spray glitter paint, and glitter paint pens.  I probably spent $50-$60 total for the 12 shirts that I made, and I have plenty of paint left over to make more.  So, why don’t you pick out some shirts that you like.  Get some spray paint.  Cut up some cardboard boxes, and let’s get started!  Click on the picture associated with each step to see the associated instructions.

Here is the map of our Magical Blogorail Peach | Dressing for the Parks Loop: