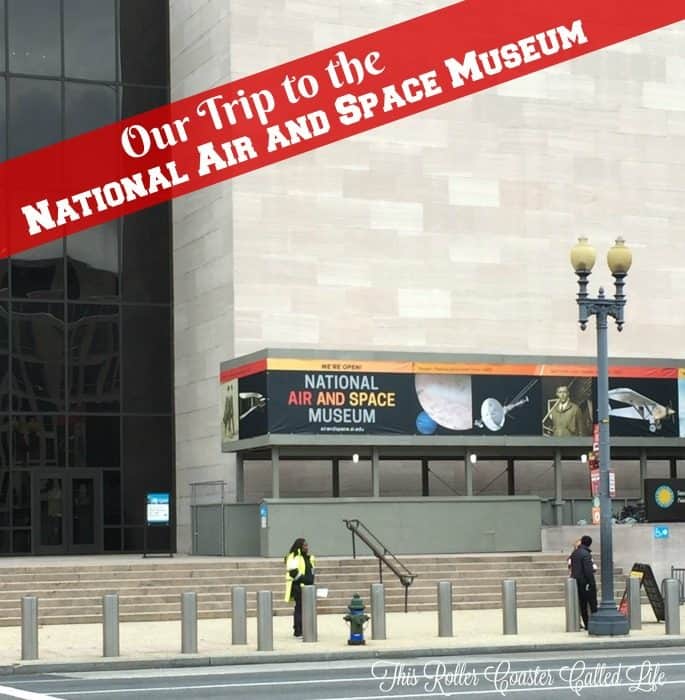 Our Trip to the National Air and Space Museum

As many know, Marvel Boy is on the Autism Spectrum.  As such, he has certain subjects that he LOVES, and all things flight related are on his list of favorites.  When planning our trip to Washington D.C., I knew that the National Air and Space Museum would be a “must-do” for our trip.  Knowing that we could only see so many things in two days, the National Air and Space Museum ended up as our first stop.  Could I really pull him past this museum to see something else??? 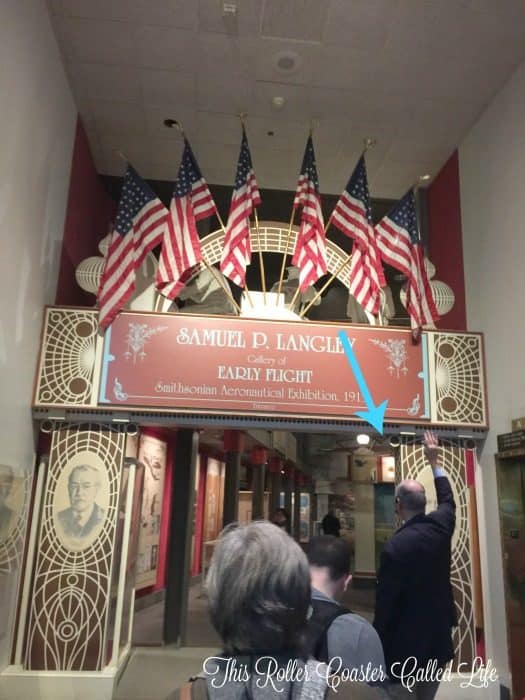 We entered the National Air and Space Museum not long before a tour began.  One of the docents asked me if we were interested in taking a tour.  I asked how much the tour cost, and he said it was the best deal in Washington D.C., FREE.  Well, of course, we decided to take it, and he was definitely right.  We started off with the history of early flight. 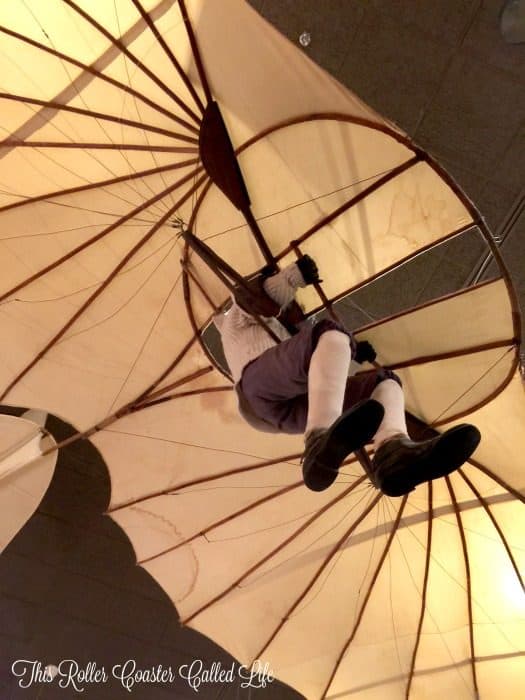 I am just amazed at the lengths that people went in exploring how to fly!  Could you imagine leaping off a hill or a cliff not knowing if what you designed would take you down safely? 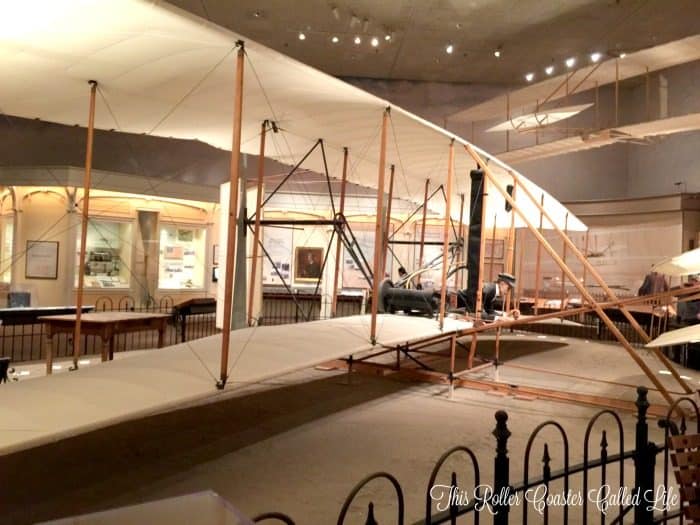 It is so amazing that the National Air and Space Museum has an actual authentic Wright flyer on display.  I can’t believe all the thought and ingenuity that went into making this flyer in a day with so little technology.  The Wright flyer looks almost new!  I guess that’s because they change the covering every 20 years.  As a side note, did you know that the Wright brothers were homeschooled for a while? 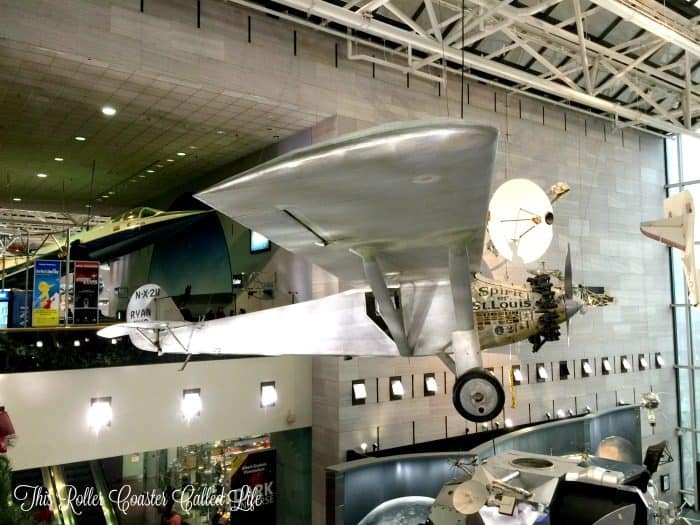 Then, we moved into the jaw-dropping time of Amelia Earhart, Charles Lindbergh, and the Spirit of St. Louis.

The museum tour included a lot of information on how the Spirit of St. Louis was redesigned for its famous transatlantic flight.  The odds were stacked against Lindbergh, but with his design ideas that moved the location of the fuel tanks, he made it! 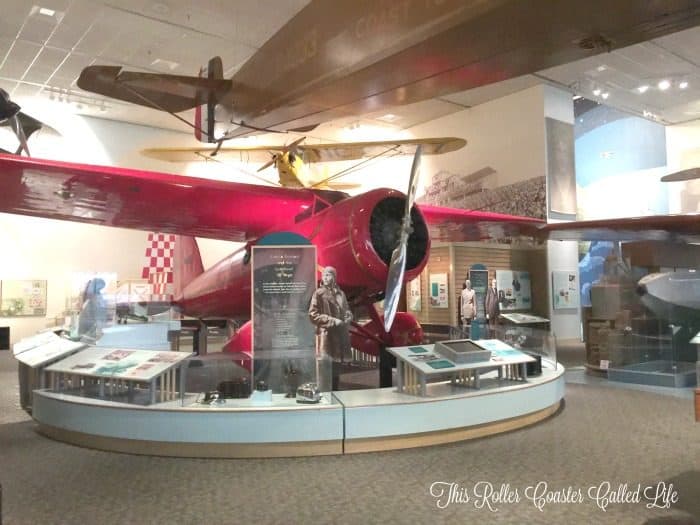 Amelia Earhart has always been an interest of mine.  How much she did as a female in a male’s world is just astounding! 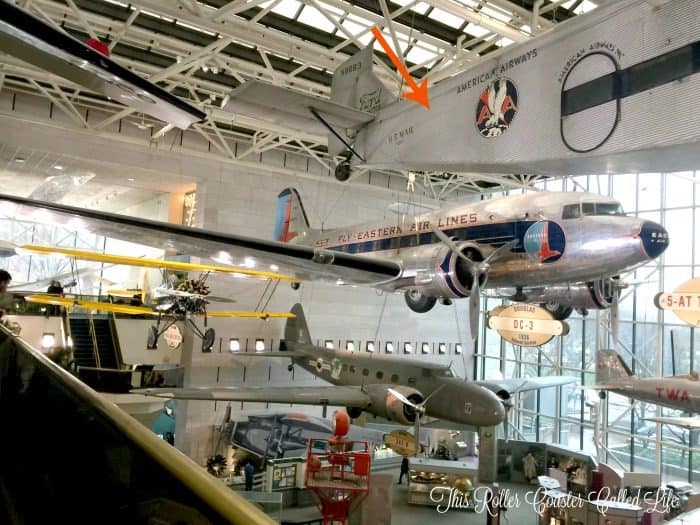 We see all the safety and comfort features that are in today’s commercial airliners.  Can you imagine flying in a plane that was made of corrugated steel like the American Airways plane at the arrow above? While it took quite some time for commercial planes to become affordable for most people, it was definitely worth the wait. 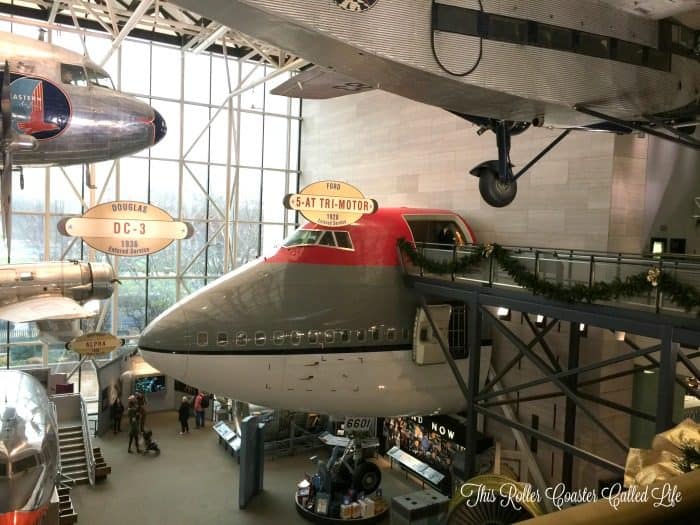 There are a couple of airplanes that can be entered and viewed as they were used years ago.  It was something to see how “fancy” and upscale air traffic was back then.  It was definitely more than a bag of peanuts! 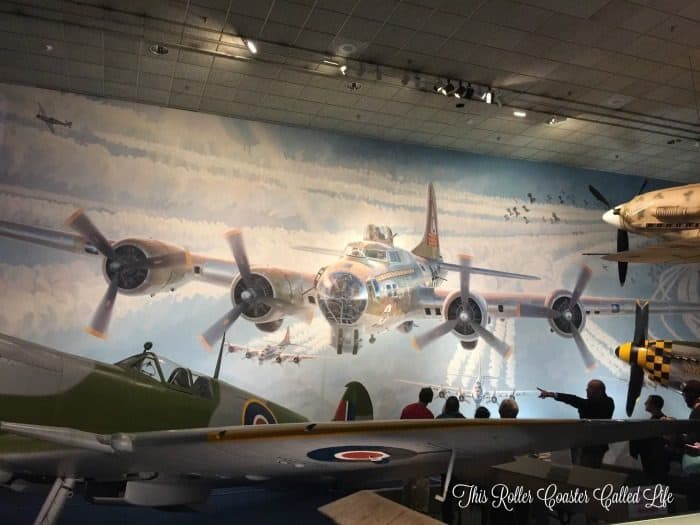 The Fortress Under Fire is an impressive sight in the World War II gallery.  This mural is 75 feet wide by 25 feet tall and takes up the entire wall.  The painting by Keith Ferris freezes a moment in time during which this American B-17G Flying Fortress was under enemy attack.  The mural is based on combat and witness reports. 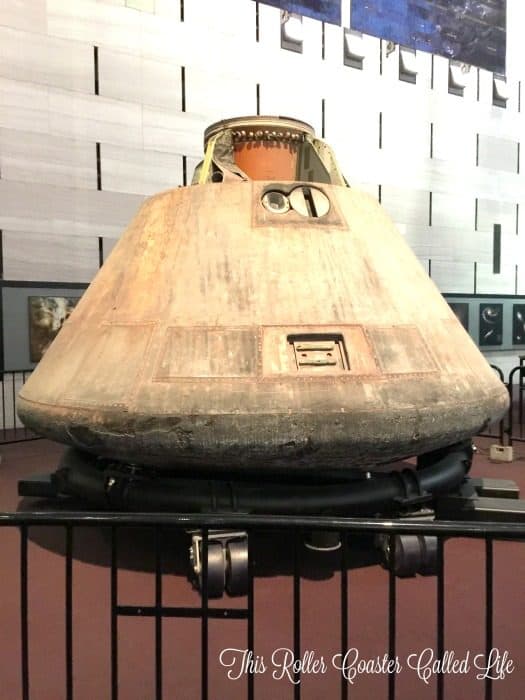 There are so many things to see at the National Air and Space Museum that the two-hour tour just barely scratched the surface!  We continued on for the rest of the afternoon.  We saw the Apollo 11 command module, Columbia in which Michael Collins stayed in while Buzz Aldrin and Neil Armstrong walked on the moon.  The Columbia is what subsequently brought all three safely back to Earth. 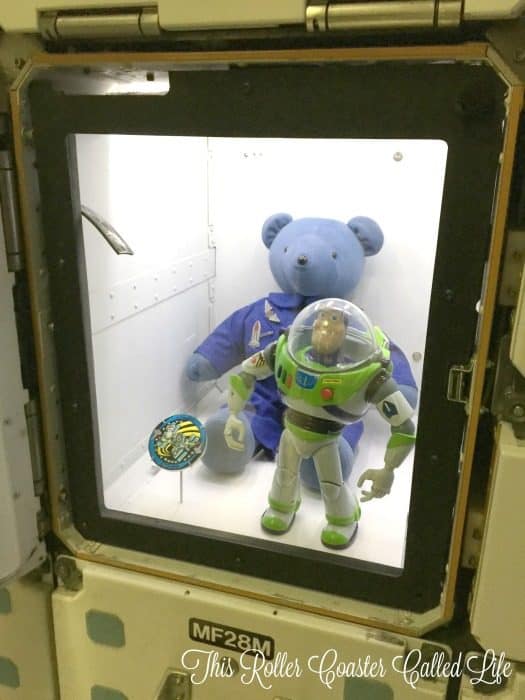 We also saw replicas of items from the space shuttle program, including these toys who made a trip into space.  Marvel Boy even had the chance to try on some space suit gloves.  Of course, I stroked when the docent told us how expensive each space suit is… 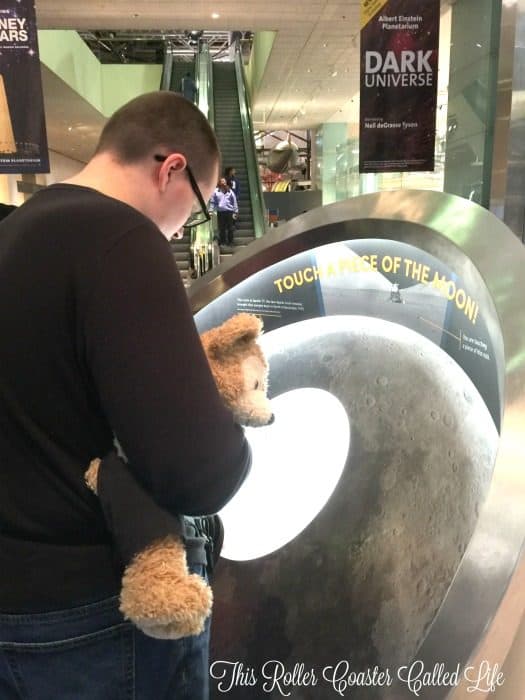 We even touched a piece of the moon.  Yes, it was a very small piece, but now, I can say that I reached for the moon and touched it.  😉 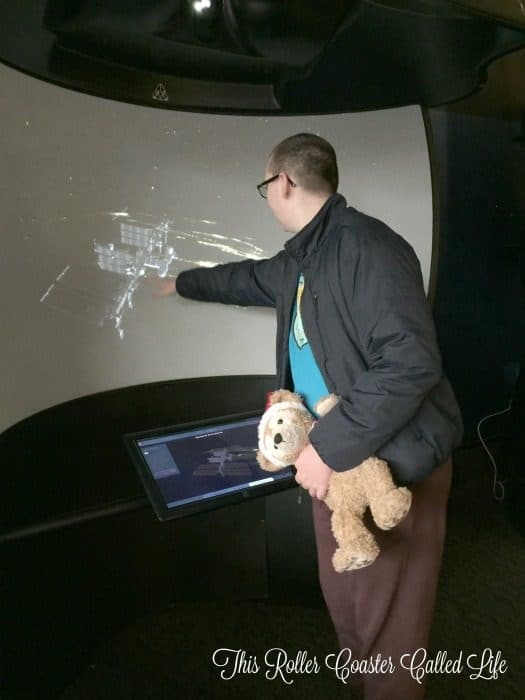 There are so many hands-on exhibits at the National Air and Space Museum.  I think that is a huge draw for any museum!  In this display, Marvel Boy was able to look at different objects in space, and here he has found the space station. 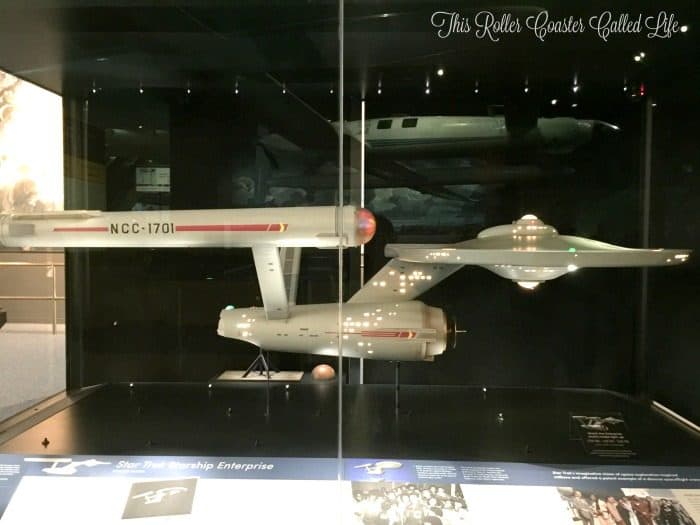 A favorite draw for Marvel Boy (and his dad at a later date) is this original model from the original Star Trek series.  Marvel Boy likes to watch Star Trek, and it was HUGE for him to be able to see this model lit up like it was for the television show!

The National Air and Space Museum was a lot of fun for all of us!  Songbird used this trip to get information for an essay that she was writing on the history of air travel.  Stay tuned for more posts about our trip to Washington D.C. to come soon.