Welcome to this month’s Blogorail Blue Loop. Today we are discussing how planning a trip to Disneyland is different than planning a visit to Walt Disney World. 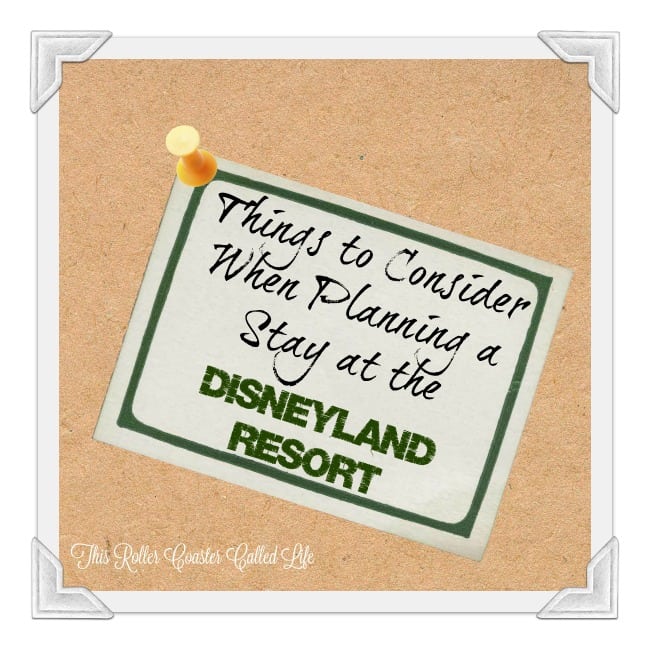 Things to Consider When Planning a Stay at the Disneyland Resort 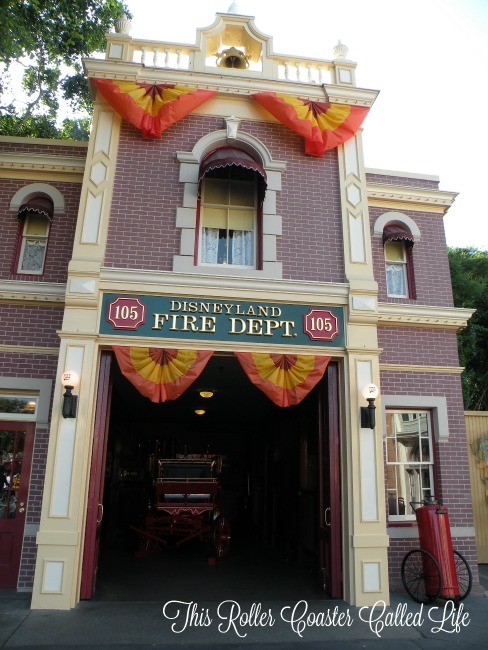 Remember, Disneyland is Walt’s park.  One of the things I love the most about Disneyland is that I can walk anywhere I want to go in the park and across to Disney California Adventure Park without having to hop on a bus to take me from park to park.  The feeling here is more intimate.  I mean, look at the window in Walt’s apartment above. 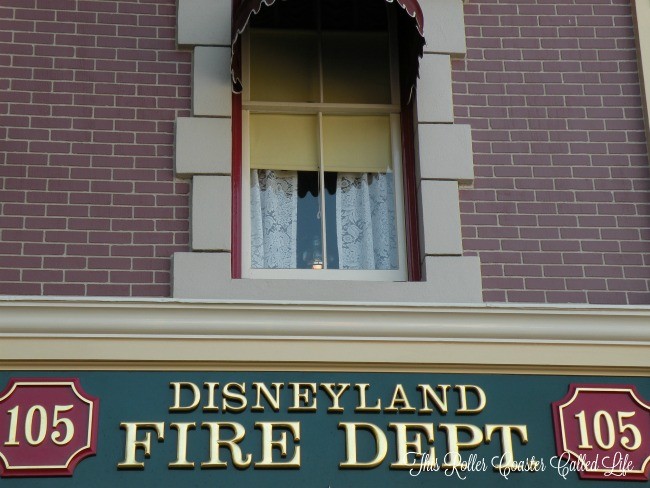 You can still see the lamp lit in his window.  It’s the little touches like this that make Disneyland such a special place to me.

First of all, I am a big fan of onsite stays at the Disneyland Resort.  I have stayed in a couple of Disneyland Good Neighbor hotels, but I prefer to stay within the magic.  Having said that, the onsite Disneyland Resort hotels are definitely different than those of the Walt Disney World Resort.  At Walt Disney World, there are different resort levels:  Value, Moderate, Deluxe, and Deluxe Villa.  While there are three different Disneyland Resort hotels, as my daughter says, they are all Deluxe.  Yes, there is some pricing variation.  I look at it more as starting at Disney’s Fort Wilderness Cabin price and going up from there. 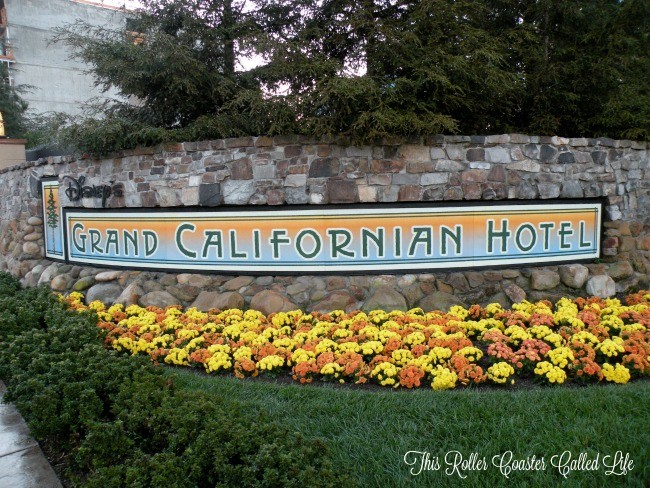 I’ll start at the most expensive of the three:  Disney’s Grand Californian Hotel & Spa.  This is a very large craftsman-style hotel that is very beautiful inside.  It does have a LOT of wood tones, so it is rather dark inside.  This hotel is very spread out, so it could be a long hike to your room.  One time we stayed here, it seemed like the walk to the room was almost as long as the walk to Disneyland from the hotel.  Disney’s Grand Californian Hotel & Spa is the home to Napa Rose and Storytellers Cafe (with the Chip ‘n Dale Critter Breakfast). 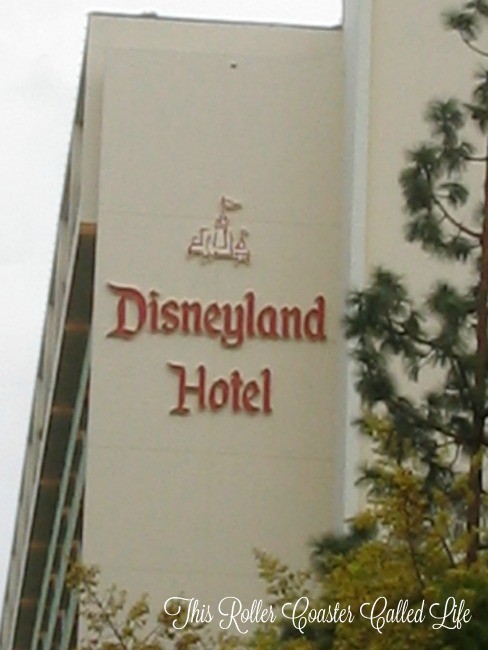 The iconic Disneyland Hotel is the first Disney hotel I ever stayed in.  I remember my father taking me to stay there when I was in high school, and I was in awe of the place.  When I took my kids to Disneyland for the first time, this is where we stayed.  The Disneyland Hotel is comprised of three towers with a large pool/monorail slide feature in the middle.  This is the home of Goofy’s Kitchen. 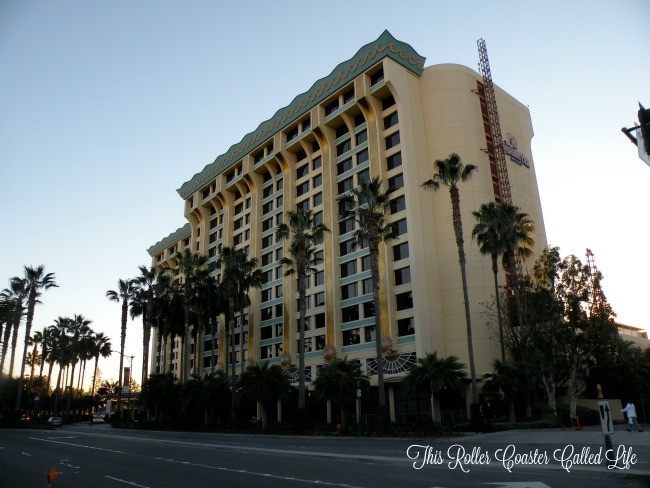 I must admit that this is my favorite of the three Disneyland Resort hotels.  The rooms seem bigger than those in the other resorts, and they are brighter.  If you get just the right theme park view room, you can see the “backside of water” of the World of Color.  This is the home of Surf’s Up! with Mickey & Friends at Disney’s PCH Grill.  I think this is our all-time favorite Disneyland character meal!

The great thing with all three Disneyland Resort hotels is that they are within walking distance of the park for most people!  There has been debate about which hotel is further away, and it really comes down to which way you are walking.  When we stayed at Disney’s Paradise Pier Hotel, we would cross the street to Disney’s Grand Californian Hotel & Spa and either enter Disney California Adventure Park there or cut through Downtown Disney to go to Disneyland. 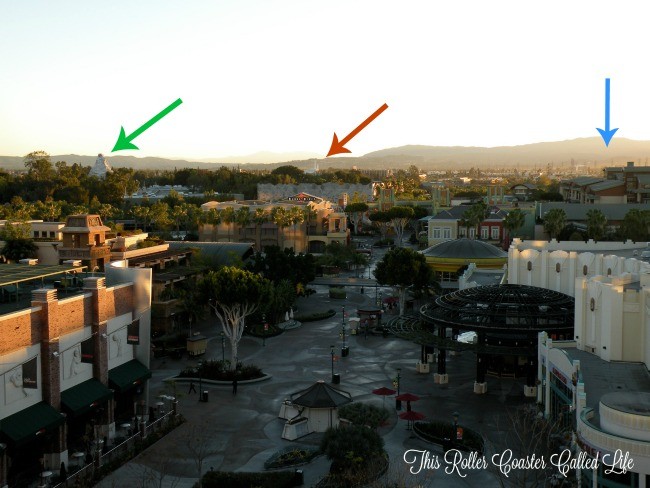 To give you a little idea of distance from the Disneyland Hotel, this picture was taken from the tower closest to Downtown Disney.  It is zoomed in a little bit, but I’m sure you can get an idea of how close this is.  The green arrow is pointing to the Matterhorn.  The red arrow is pointing to Space Mountain, and the blue arrow is pointing to Disney’s Grand Californian Hotel & Spa.  Granted, you do have to have to walk to the park turnstiles and then turn toward the attractions.  I love how this post from MousePlanet breaks down the distances from the various Disneyland Good Neighbor hotels, as well as the Disneyland Resort hotels.  As you can see, the distances are very close.

Once you’ve decided to stay onsite at a Disneyland Resort hotel (if you do), check out these tips for your onsite resort stay.

Guests of the Disneyland Resort hotels can enter one of the parks an hour early to enjoy select attractions before that park opens.  Valid theme park admission is required.

Each of the three resorts has a small place for kids to watch classic Disney shorts.  If your child needs a little down time away from the crushing pace of the vacation, the Paradise Theater is actually in a small room away from the action.  It is beach-themed and low-key.

There is an entrance into Disney California Adventure Park from Disney’s Grand Californian Hotel & Spa.  This entrance can be used by guests of the Disneyland Resort hotels, and at times, it can be very convenient.

Transportation to Disneyland Resort from the Airport

As of this time, Disneyland still does the traditional Fastpasses and not the Fastpass+ of Walt Disney World.  I’ve heard rumors that Fastpass+ will come in the future, but since Disneyland is more of a locals’ park, it would make sense to me to leave it like it is.  Of course, we all know Disney is NOT going to ask me what I think…  😉

I LOVE staying onsite at the Disneyland Resort hotels!  I’ve stayed at all three over the years, and they each are special in their own unique ways.  I know the cost is higher to stay here than the several non-Disney hotels in the area, but remember, the Disneyland Resort is a much smaller resort, and you don’t need the many days to see it like you do at Walt Disney World.  I’ve heard some say that you can do everything at the Disneyland Resort in 2-3 days. We usually take longer than that just because we don’t want to feel rushed, but you wouldn’t have to.

So, do you prefer to stay onsite or offsite at the Disneyland Resort?

For more ways Disneyland trip planning is different,
check out the other great posts from the Blogorail!

Here is the map of our Magical Blogorail Blue | How Planning a Trip to Disneyland is Different Loop: