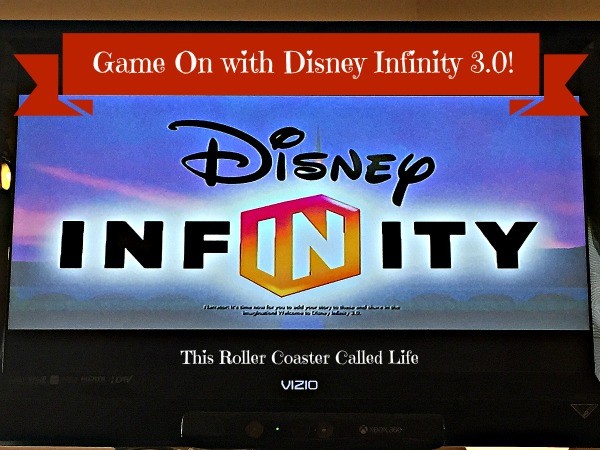 “I do not understand how bashing bucket-heads makes me a better healthcare companion.”

“Marvel Boy, don’t put Avengers Tower next to Cinderella’s Castle.  Put it over by Space Mountain.”

Yes, Marvel Boy and I have done these things before.  No, not in real life.  Marvel Boy is simply playing his favorite video game.  And I may or may not somewhat enjoy this game as well……  I’m talking about Disney Infinity 3.0.  More often than not, you can find Marvel Boy soaring around Avengers Tower as Baymax while I build a treehouse as Tinker Bell.  Today, I’d like to share my thoughts on Disney Infinity with you.

For those of you who haven’t heard of this game, I’d better do some explaining.  Disney Infinity was first released in the latter half of 2013.  The game was met with thunderous acclaim, with over three million starter packs sold.  But, those nice people at Disney Interactive Studios weren’t done.  In April of 2014, a live webcast announced the next stage: Marvel Super Heroes. Disney Infinity 2.0 launched in September of the same year.  There were two starter packs for this version: the Marvel Super Heroes starter pack (with Iron Man, Black Widow, and Thor), and the Toy Box starter pack (with Merida and Stitch). The sequel was just as popular as the original.  However, the people at Disney Interactive Studios were still not done.  Two words: Star Wars. 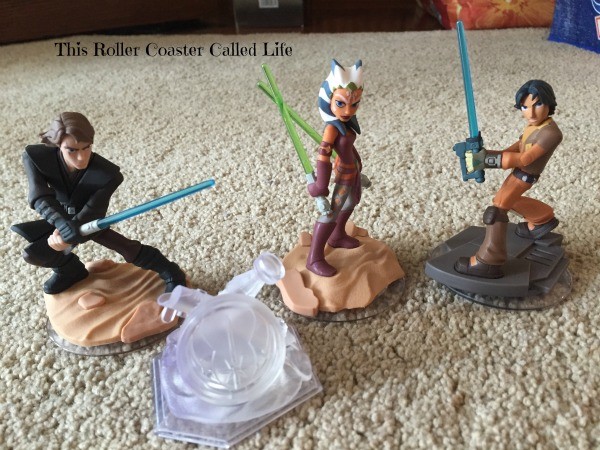 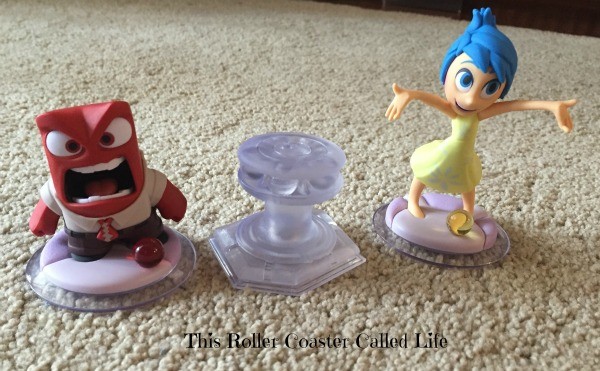 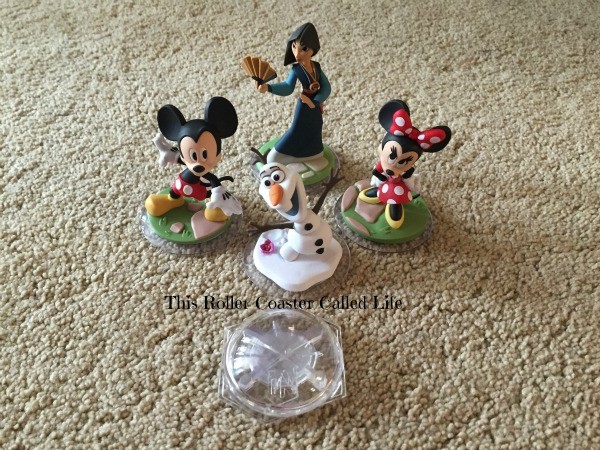 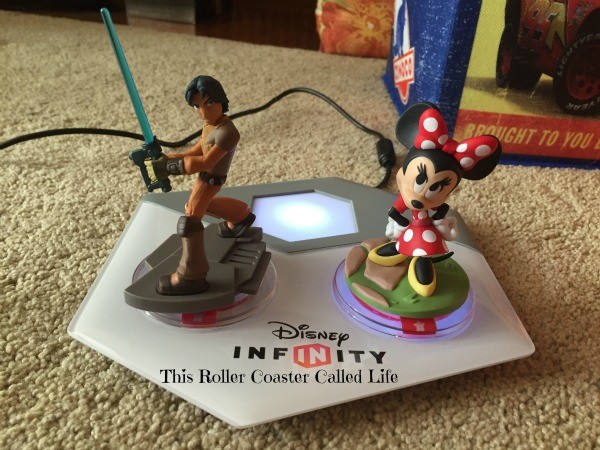 Disney Infinity contains toys-to-life elements.  That term translates to beautifully sculpted figures being placed on a base that, when plugged into the console, brings the character into the game.  For example, placing the Merida figure on the base will bring the same character into the game, however, at any time, you can remove Merida from the base and put on Mr. Incredible instead.  There are two basic modes: play sets and the toy box. 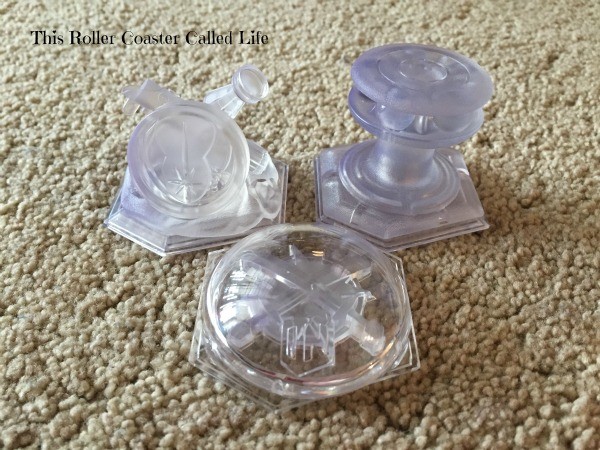 Play sets are like how your average video game would play out. In 3.0, there are three that are out right now: Twilight of the Republic (which is based off of The Clone Wars TV show), Rise Against the Empire (which is set during the original trilogy), and the Inside Out playset (based on the movie of the same name).  There’s also a playset for Star Wars: The Force Awakens and Marvel Battlegrounds coming out sometime in the future.  Most of the time, there are about 3-6 specific characters for each playset.  But, in 3.0, there are Champion Coins, which, when collected, allow a character from another playset to play in that playset.  One example would be having Anakin Skywalker fight alongside Princess Leia in the Twilight of the Republic.  There’s a story and missions to go along with said story.  After you’ve completed the main storyline, there are side missions and wandering to do. 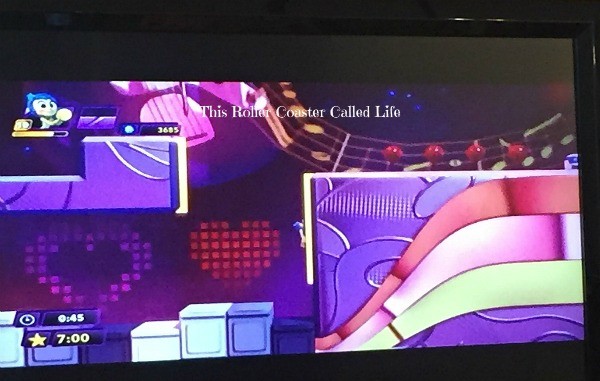 Each playset is about 4-6 hours to complete the main storyline.  It’s even longer if you do all of the side missions or drag it out over a few sittings.  However, all the side missions are worth it.  The more side missions you do, the more sparks you get and the more stuff you unlock.  In the Star Wars playset, you can go to different planets, like Hoth or Coruscant (with the Jedi Temple).  The Inside Out playset is very different from the others.  It’s more of a platformer game complete with side-scrolling action.  You can also play a game somewhat similar to Frozen Free Fall to unlock new levels.

The toy box is just that, a big toy box.  Inside the toy box, you can mash together anything and anyone.  I gave an example above, but that was just one of many.  You could have Davy Jones and Loki fight together against palace guards from Aladdin.  You could build a town featuring buildings from Metroville (the town in The Incredibles) alongside Avengers tower with Carl Fredrickson’s house flying above.  You could even have a race around Cinderella Castle with Captain America in a landspeeder and Dash on foot. 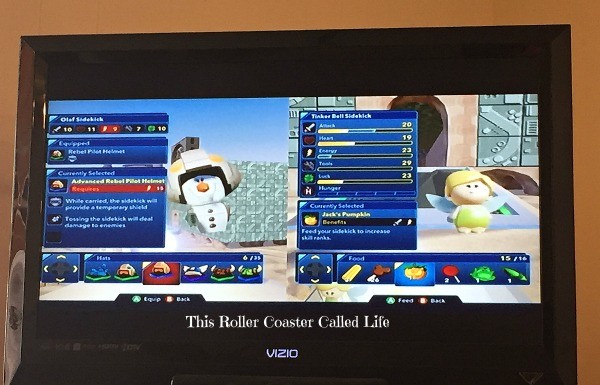 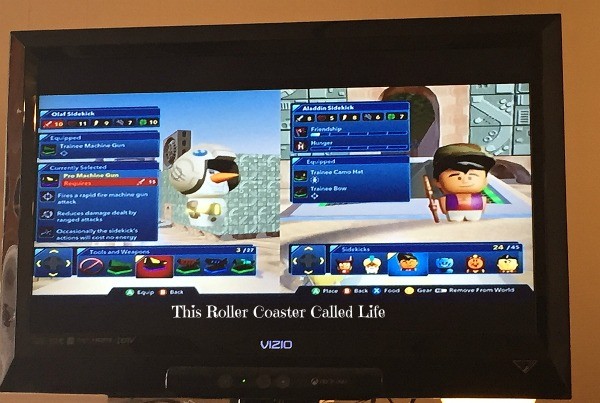 A new element is the idea of sidekicks.  These are little block characters that can follow you around and fight alongside you or create with you in the Toy Box.  They have all kinds of weapons: from magic wands and potions to laser guns and rocket launchers.  There are also a variety of hats that do things like healing or turning the character that’s carrying it invisible.  This came in handy for combat.  My sidekick had a hat that could heal and Marvel Boy had a sidekick with a hat that could provide a temporary shield.  We would constantly pick up each other’s sidekicks for pick-me-ups.

Something I personally enjoy is INteriors.  If the Toy Box is the great outdoors, then INteriors are the great indoors.  You can theme the walls, trim, floor, ceiling light, and put whatever kind of furniture in that you want.  Marvel Boy’s room has walls from Toy Story, Han Solo’s booth from the Mos Eisley Cantina, and Ant-Man’s helmet.  I have rooms dedicated to the Darling nursery from Peter Pan, Olaf’s summertime dream from Frozen, and The Ghost from Star Wars Rebels. 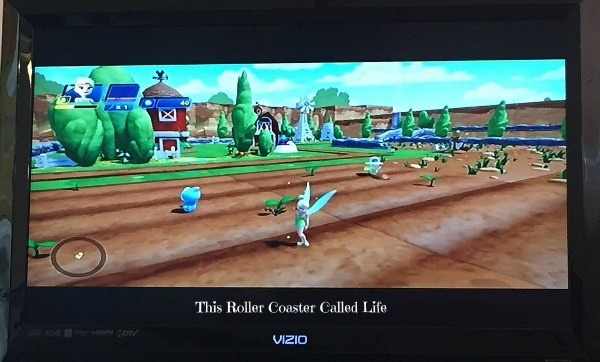 Another fun element is farming.  This is how you “level up” your sidekicks.  Give your sidekick a hoe and tell them to work a plot, whether it’s in the farming tutorial area or in your own private toy box.  They will automatically plant for you.  Plants range from “normal foods” like lettuce and corn to really weird foods like lollypop trees and churro cacti.  When you first harvest a plant (by chopping it up), you get a hat for your sidekick that gives “an increased chance” at growing it.  However, in my experience, that hat gives you about a 90% chance.  We’ve had times where almost all the plants growing were the one pictured on the hat.

If you don’t feel like creating in the Toy Box or messing around in the playsets, Disney Infinity provides a happy medium.  They’re called Toy Box Games.  There are two: Toy Box Takeover and Toy Box Speedway.  Toy Box Takeover was offered as a bonus with a preorder of the 3.0 starter pack.  In Takeover, Syndrome (from The Incredibles) takes the magic wands that you use to change the world around you in the Toy Box.  Merlin (from The Sword in the Stone) arrives to berate you on a careless use of magic….. Only to have Syndrome reappear for a brief moment and steal his wand.  From there, you go through different worlds (like Pirates of the Caribbean and the Death Star) before heading to Syndrome’s lair for a final showdown.  The Toy Box Speedway is, well, a speedway.  There are nine different tracks to choose from: 6 Disney, 1 Marvel, 1 Pixar, and 1 Star Wars.  You can play with any character in both of these games. 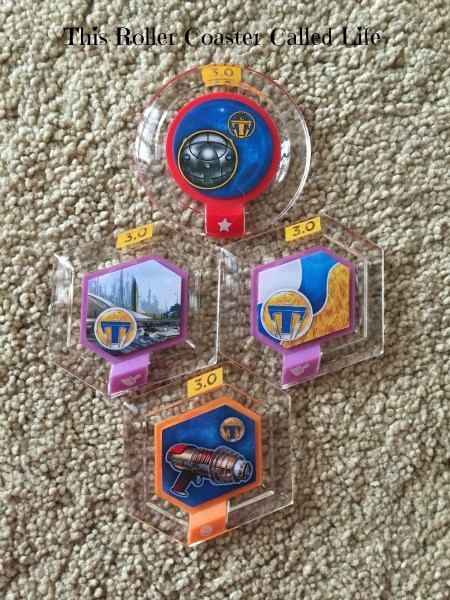 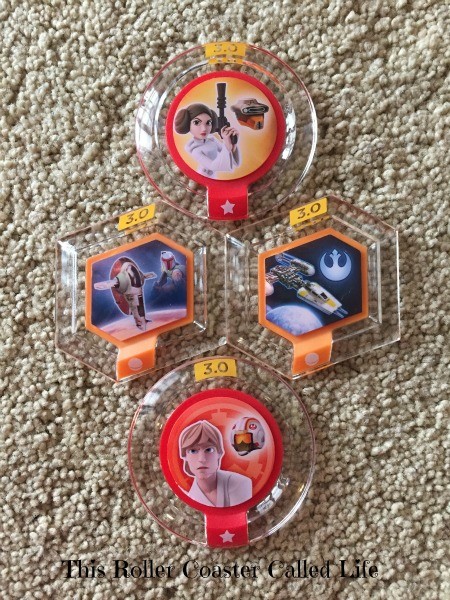 There’s one more thing I should mention. That’s power discs.  Did you see the hexagonal space on the base? (Rhymed)  You can place power discs on there to enhance your game.  Some power discs give you new weapons or vehicles while others change the skydome or terrain of your toy box.  The circular ones can give you special abilities, such as an effect that helps destroy enemies or a costume change.

My opinion?  How about Marvel Boy’s opinion?

Which do you like better: Playsets or Toy Box?

“Ezra Bridger from Star Wars Rebels, although Iron Man from 2.0 is a close second.”

“As far as building something cool, probably the Droid Spawnner, so I can build a droid factory.  Which I already have.”

“Twilight of the Republic.”

“As far as packs go, that would be the Green Goblin Glider.  Tools, I’d have to say the Diffusenator, because it can make things blue”

What’s your favorite part about Disney Infinity?  And not because it has Star Wars in it.

“It’s so creative.  You get to create.  Like I made this incredibly cool droid factory!”

Yep, that’s Marvel Boy.  So what do you think?  Do you own Disney Infinity?  What’s your favorite part/character/pack/tool/sidekick/etc?  Do you have any hints or tips to share?

Note: I did not write this post for profit.  I wrote this post for fun.  I took all pictures with my iPhone while Marvel Boy and I played the game.  I got all information contained in this post from Wikipedia and the official Disney Infinity website.