Disclosure: This shop has been compensated by Collective Bias, Inc. and its advertiser. All opinions are mine alone. #BringingInnovation #CollectiveBias 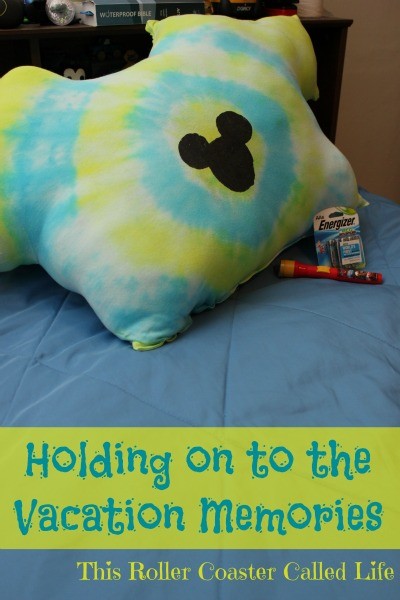 Holding on to the Vacation Memories

Yes.  We are THAT family!  You know you’ve seen them at a Disney park.  A family or group that is wearing all the same shirts?

I had been to Disneyland and Walt Disney World lots of times before I got married and had children.  Most of my trips were solo trips or trips with my dad.  When I first had the opportunity to take Don and the kids to Disneyland I jumped at the chance.  Don designed the logo, and we had them printed.  Why did we want to do this?  There were several reasons, but one of the main reasons was that it would be easier to find a missing family member if we could show cast members what that person was wearing.  Plus, it was nice to have special shirts.  Shirts that were specifically for vacation.

In the years since then, we have been to Disneyland and Walt Disney World several times, and most of the time, we have made matching shirts.  Sometimes, we order off Etsy, and sometimes, we make our own.  It almost seems like the kids like it most when we make our own shirts.

But you know what?  Invariably, the shirts don’t get worn after we get home.  Or they only get worn for a short time before they are outgrown.

I was trying to think of something to do with all these shirts we have from previous trips, and I thought there had to be some way to recycle them with a new purpose and keep them out to hold on to the vacation memories.  So, I thought, what about making a shirt into a pillow…  So, I asked Don to find some of our past vacation shirts.  When he brought down a stack, I asked Marvel Boy which shirt he would like made into a pillow. 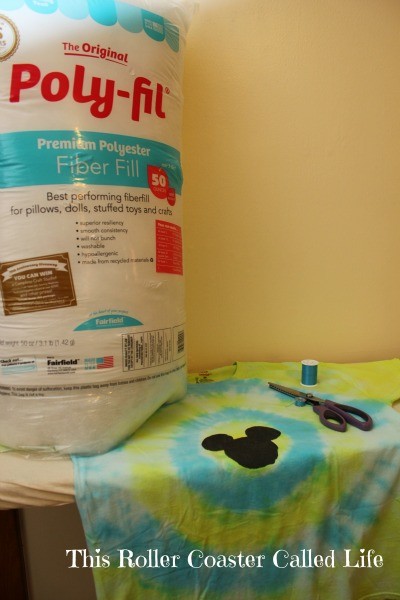 He chose a tie-dyed shirt that we had made a few years ago and spray-painted a Mickey Mouse head on.  I grabbed some stuffing at Walmart and pulled out my sewing machine.  I did have to wipe the dust off the sewing machine as I don’t sew that often. 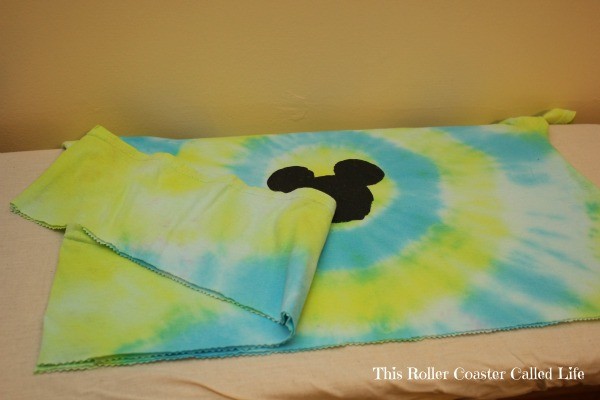 This shirt is an adult large, and I didn’t realize it would make such a BIG pillow.  However, now that I’m done with it, I’m happy that it did turn out so big.  My son thinks it is really comfy!  Obviously, a smaller t-shirt will make a smaller pillow.  Anyway, back to the instructions…  I ironed the shirt first to make it easier to line up the edges.  Then, I cut some length off the end of the shirt to make the pillow a little smaller.

Then, I turned the shirt inside out and pinned the sleeves and collar closed. This is where I planned to start sewing the shirt together. 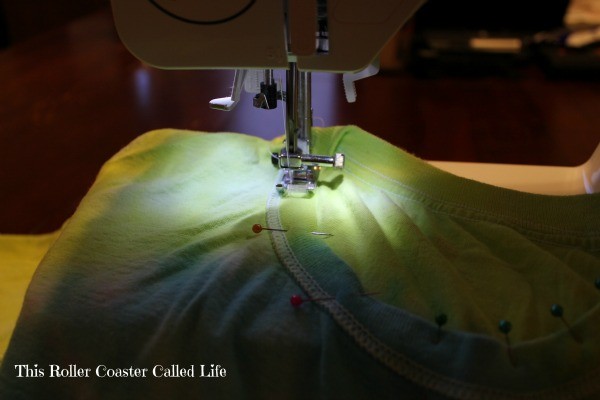 After sewing the arms shut, I sewed around the collar. Keep in mind that t-shirts are stretchy by nature and can be a little difficult to sew. I tried to sew over seams that were multiple layers thick to try to eliminate some of the stretchiness of the fabric. 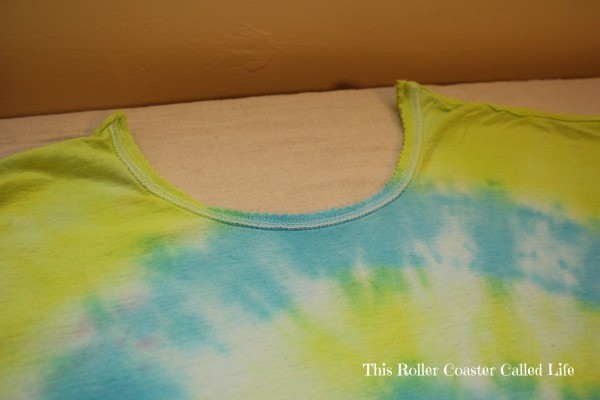 After sewing the collar closed, I took the shirt over to the ironing board and cut the excess from around where I stitched.

Then, I turned the shirt right-side out. After I did, I made sure to push out the edges around the neck and the sleeves. That way, I had a good idea of what this was going to look like. 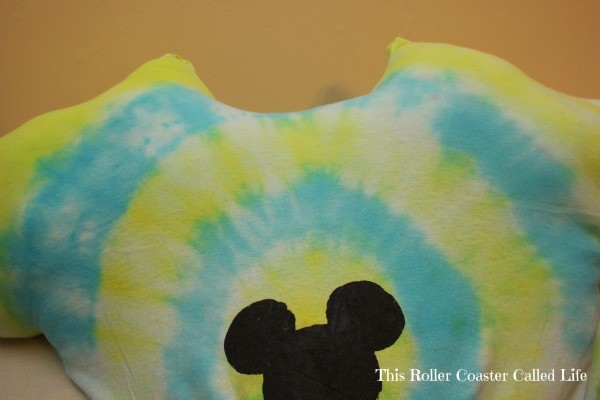 Then, it was time to start stuffing the shirt. I was very careful to make sure the stuffing reached all the edges, so the pillow would truly look like a shirt. It did take a LOT of stuffing, but the end effect was well worth it! 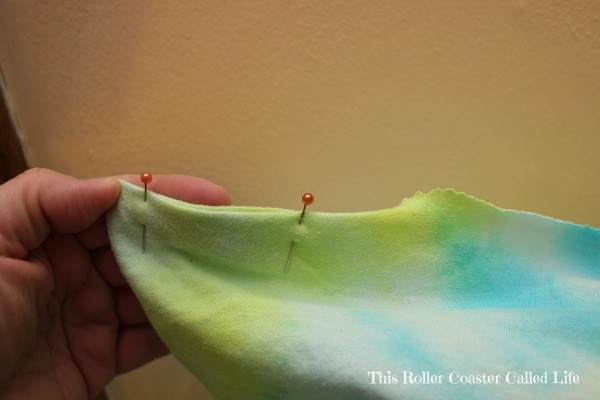 After I stuffed the top half of the pillow, I got ready to stitch part of the bottom closed. I wanted to make sure the neck, chest, and sleeves were full and puffed out. Then, I started turning under the bottom edges and pinning them up. 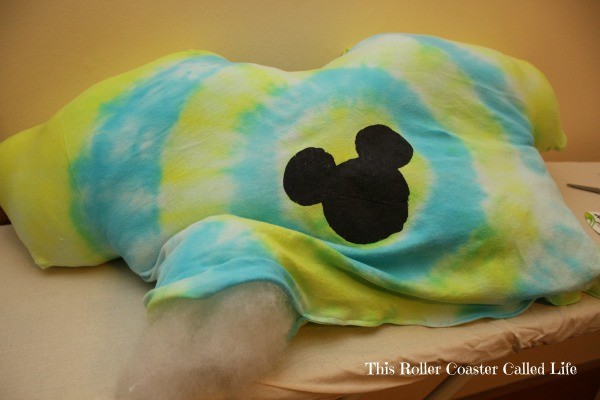 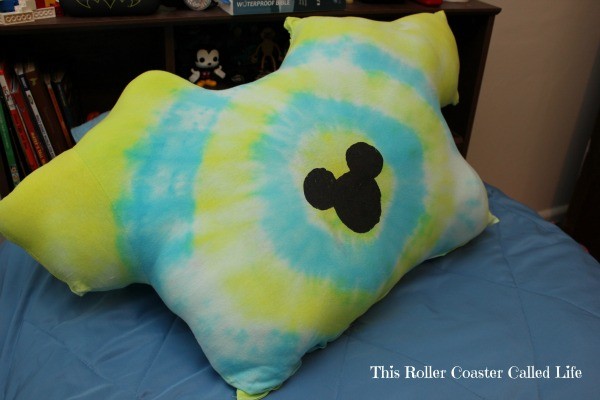 And, with that, the pillow was finished!  But you know what?  I’m not the only one recycling these days.  Fortunately, there are many of us recycling and trying to keep items from the landfills, and it’s nice to see more companies recycling, too!  Did you know that Energizer® is now recycling batteries?  Well, they are!  Their new batteries are called Energizer® EcoAdvanced™ and are available in AAA and AA.  Today, Energizer® EcoAdvanced™ contains four percent recycled material by total weight (which is nearly ten percent of a key active ingredient).  Did you know that by 2025, it is an Energizer® goal to increase the amount of recycled battery material ten-fold to forty percent. 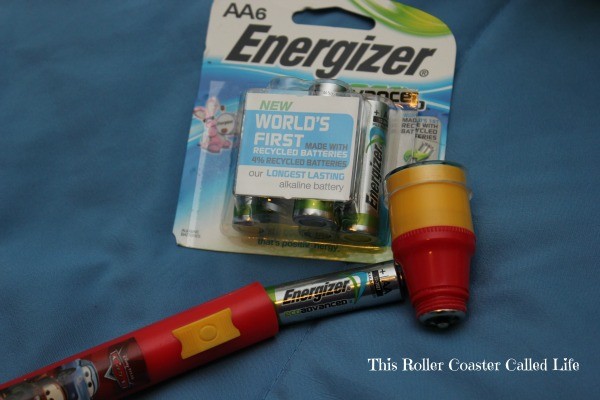 Also, Energizer® EcoAdvanced™ holds up to 12 years in storage, and that’s what makes it such a perfect choice to power my son’s flashlight that he keeps by his bed.  Some day when a storm comes that knocks out the lights, I want to know that my son can reach over to his flashlight at the head of his bed and find that it will work when he needs it!

If you would like to buy Energizer® EcoAdvanced™, too, I was able to find them in the battery center near the checkouts at the front of my local Walmart. I have the batteries in my son’s flashlight changed, and now, I’m heading to change some other flashlights, too. I can’t wait to put these batteries in the “candle” light on my snowman decoration that I just bought at our local craft fair! How will you use your Energizer® EcoAdvanced™?