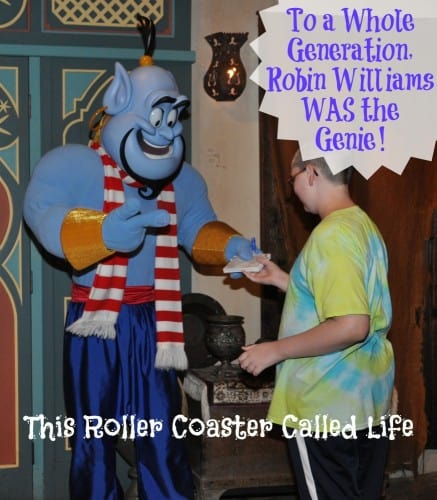 I so remember watching Robin Williams in Mork & Mindy when I was a kid.  Did I just date myself?  I also watched many of his movies and found that he had such a wide talent of acting, from the seriousness of Dead Poets Society to the zaniness of Mrs. Doubtfire.  He was so talented!  But to the younger generation, he will always be the Genie in the animated Disney’s Aladdin.

I was saddened to hear of his passing yesterday and even more sad to hear how he died.  The fact that he took his own life…  Obviously, people of all sorts have dark times, but they are defined by how they deal with those times.  It is because of this that I took the opportunity to discuss Robin Williams death with my teenage daughter.  Here is a synopsis of what I shared with her.

Now, I know this is a more serious subject than I normally approach here, but I hope it will encourage someone to look for help.  Also if your children are old enough to process this information, let them know you are there for them if they find themselves in need of discussing problems.  Keep the communication open!

To lighten the mood a little, I’m going to link up a really cool YouTube video of a much younger Robin Williams with Walter Cronkite.