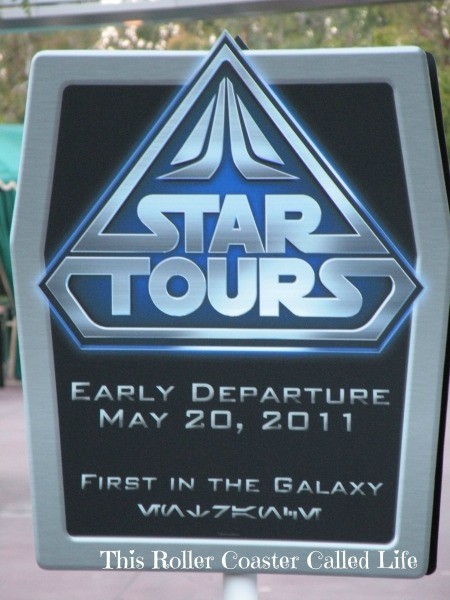 As I posted before, I was so fortunate to be one of 1200 people randomly drawn to attend the May 20 Star Tours Preview Event at Disneyland.  I was only allowed to bring one guest, so it was decided that DS8 would join me.  The day before the event, we picked up Don at work and drove furiously to get to Disney’s Paradise Pier Hotel, our home away from home.  We made it to bed around 10 pm, knowing that DS8 and I would have to get up about 2:45 am.  The parking lot for the event opened at 3:30 am, so I had decided that we should aim to get to the checkin location before the parking lot opened.

It was so hard to get up when the alarm went off!  I pulled myself out of bed, got ready, and worked to awaken DS8.  He was a little testy at first, but as soon as I said Star Tours, he bounded out of bed.  He quickly got ready, and we left for our adventure.

When we made it to the checkin location, we were told that we were second in line.  I was really surprised because I really had expected some diehards to camp out overnight.  We were thrilled to be that close to the front.  Promptly at 4:00 am, the checkin process began.  We were given wrist bands and directed to another place to line up.

Then, the television crews came.  {I will interject here that this country girl has never seen so many cameras and microphones, and what I had seen had never been in my face before.  I don’t do well on camera, certainly not so early in the morning.}  We talked to a couple of major networks, MousePlanet, LaughingPlace, and Disney Parks Blog.  Yes, we were in the Disney Parks Blog post about the event.  Isn’t that wild?

I had taken a bag of tricks to keep DS8 occupied.  I had an iPod, snacks, drinks, and his “squishy” toys that keep him grounded.  DS8 also talked to the gentleman and his daughter who were in line in front of us.  I should have known that there would be lots to keep his attention.  We had the band. 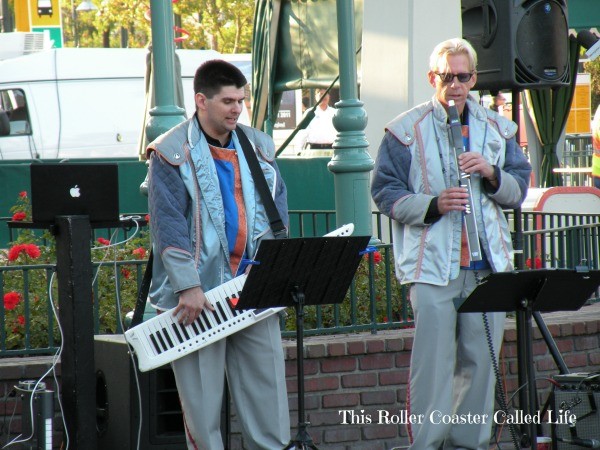 We got to watch the high school seniors there for Grad Nite leaving the park.  It surprised me what a long process this was.  Finally, the last holdouts were escorted out of the park, and we could see the cast members begin to spray down Main Street. 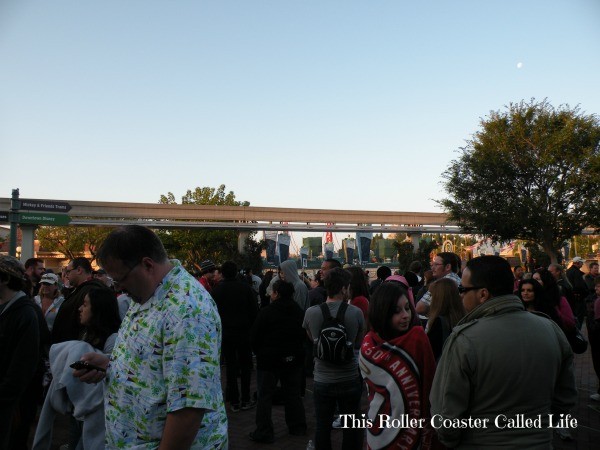 Nearly, 2400 of our “closest friends” were in line at this point.

By this time, we could see cleaning wrapping up just inside the gate area.  Kudos to the cast members who were on the clean up crew because Disneyland did not look like it was full of high school seniors all night.

At this point, we were led in to just in front of the Mad Hatter shop.  Here, we stopped for another few minutes.  Soon, we saw three gentlemen in the new Star Tours costumes walk down Main Street toward us.  They stopped in front of us, and then led us to Tomorrowland where we stopped just before the Astro Orbiter.  It was here that I learned about Rich.  Rich has worked at Disneyland for many years.  In fact, the only one who has been there longer is Oscar at Carnation Cafe.  Rich has his 50 year pin, and he even showed me his 20 year ring. 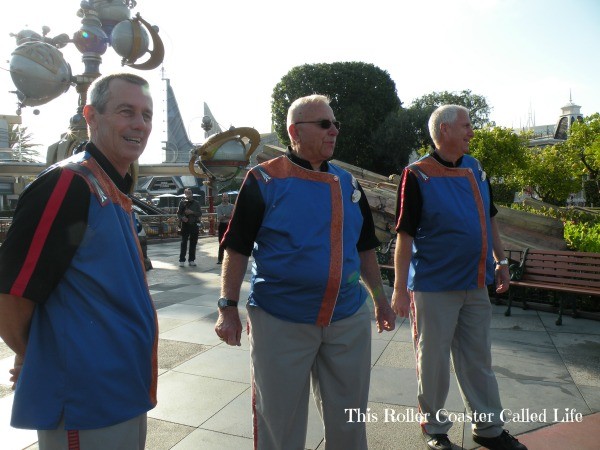 Soon, these three gentlemen led us to the entrance of the Star Tours queue where another cast member took over leading us through the very lengthy queue.  As we wound near the Plaza Inn, I was amazed how the line of people stretched all the way down Main Street.  Now, we are stopped before the first entrance into the building.  When I did enter this little alcove, I was amazed at how COLD it was.  It will certainly feel good in the middle of summer!  We were then stopped just in front of the main doors to the inside queue.

With much fanfare, the cast member led us into the main entrance.  I heard her instructed to hold up by C3PO so that we could see and hear the entire loop with C3PO and R2D2. 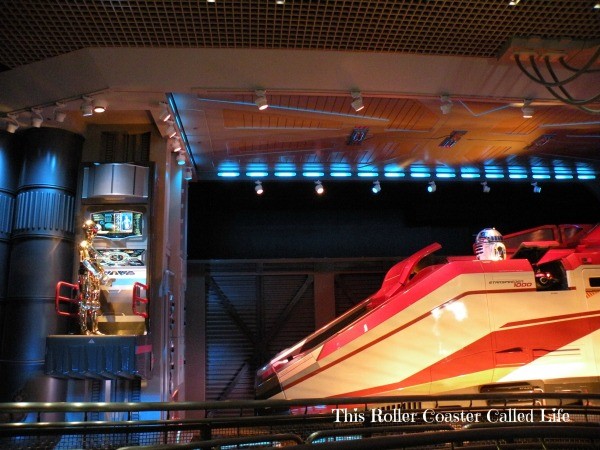 Next, we were led to where the 3D glasses are distributed.  The redesign of the 3D glasses makes them fit better for all (kids and adults).  We picked up our glasses and waited until just about 9:00 am.  At that time, we were taken to our Starspeeder 1000, the first one to fly that day.

The 3D effects and the new destinations were amazing.  We went to the Wookie planet and had a Wookie on our windshield.  The space battle scene was so real that we really felt a part of it.

The Starspeeder 1000 was a smoother ride than the original Star Tours, but please heed the warnings about riding with neck and back problems.  We were fortunate enough to catch a soft opening that afternoon so that Don and DD11 could ride.  DD11 said that her neck was whipped around some.  Of course, the queue is dark.  DS8 had to put on his ear protectors part way through the queue, so if your child has sensory processing issues, please keep this in mind.

At the end of the preview event ride in the morning, there were cast members handing out souvenir buttons to everyone who participated.