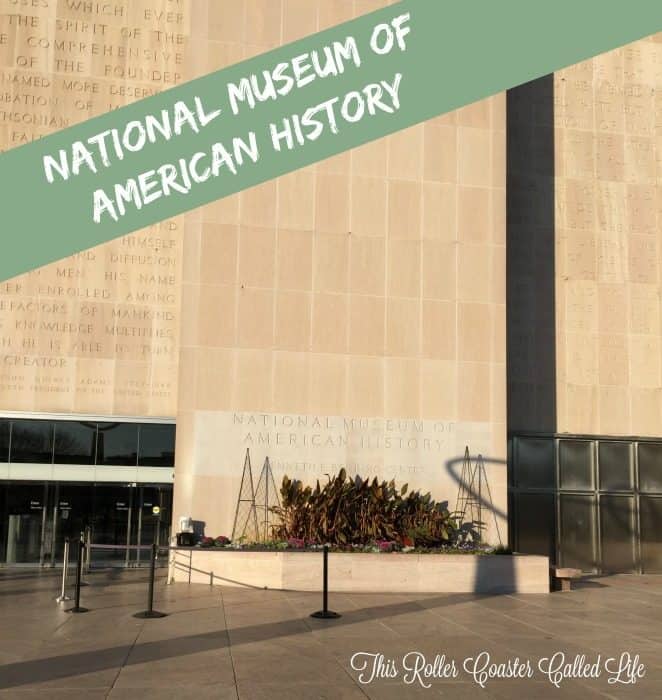 After we toured through the U.S. Capitol and the Library of Congress, we headed back to our trolley stop to continue on our journey.  Songbird wanted to see the “Smithsonian Castle” which was one of the trolley stops.  When we got off the trolley and entered the castle, we realized there really wasn’t a whole lot to see here and decided to walk across the National Mall to visit the National Museum of American History.  We had read about the push to preserve Dorothy’s ruby slippers and also knew there was a special Muppets exhibit, too.  There was something that each of the kids wanted to see. 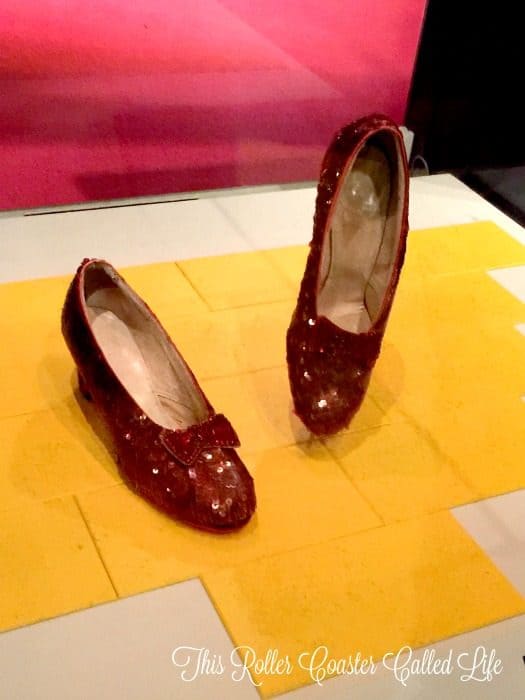 We knew that we wouldn’t have a lot of time in the museum; since, we needed to be at the trolley stop before 5 pm.  This left us less than two hours, so we targeted the things we wanted to see most.  That meant the ruby slippers were up first.  For some reason, I truly thought there was more to the ruby slippers than there was.  When I watch The Wizard of Oz, I see a lot of bling and honestly thought there was more “bling” or jewels to these shoes than there are.  I believe the information online that I had read about the restoration planned for the ruby slippers stated that these were just regular shoes that had been purchased and covered with sequines.  That truly is what they look like in person.  They reminded me of the shoes I got for high school prom that I had dyed to match my dress.  I hope the museum is able to restore and save these shoes.  They probably need a lot of work… 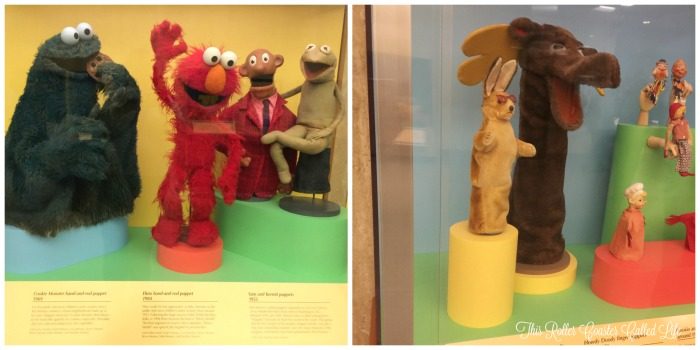 Next up on our list was the Muppets.  There is a permanent display of Bert and Ernie with the other television show displays, but at this time, there were a couple of display cases with original puppets used for television shows.  Of course, my kids knew the Muppets, Elmo, and Cookie Monster.  Marvel Boy was excited to see the original Kermit puppet.  However, I had to explain some of the other puppets displayed.  How many of you remember Captain Kangaroo?  I guess I just dated myself… 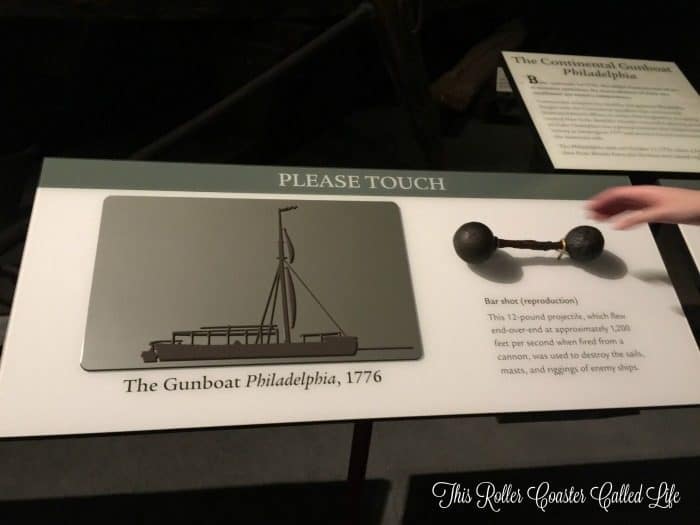 After seeing the two things we absolutely HAD to see, we then followed signs for exhibits that we could see quickly that sounded interesting.  One of the things we saw was the ORIGINAL American flag.  How I wish I could share a picture of that; however, there is no photography allowed in that exhibit.  If you have a chance to go see it, I would highly recommend it! 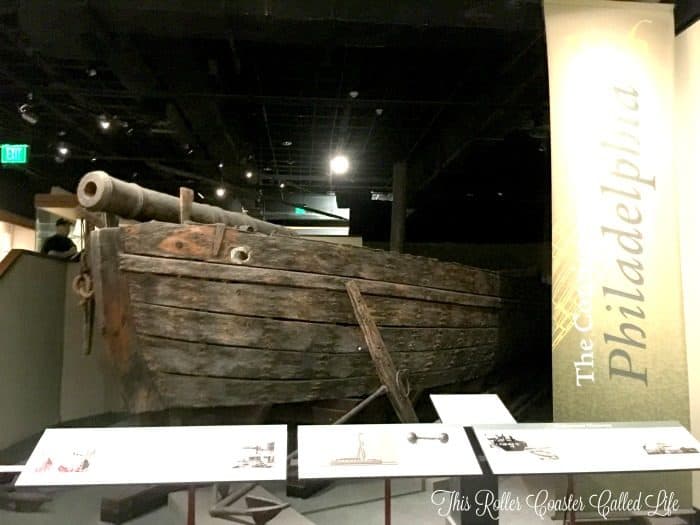 Of course, it is also amazing that the museum could not only preserve the gunboat but also be able to hoist the restored boat into the top floor of the museum! 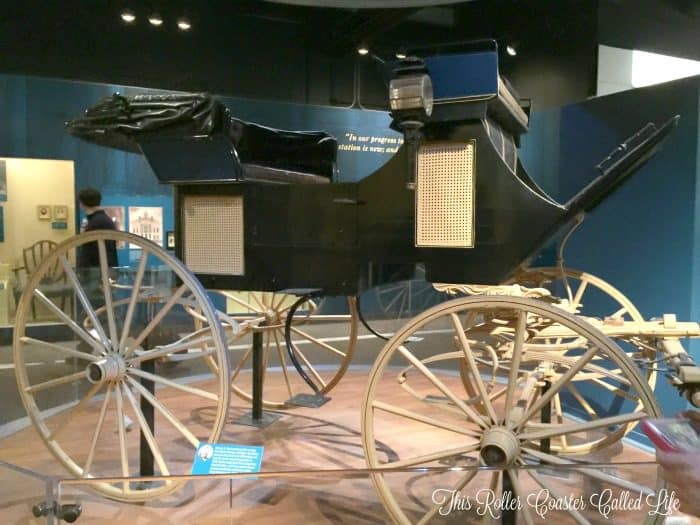 I think my favorite area of the museum that we saw on this trip was the presidential exhibits.  From Ulysses S. Grant’s carriage to campaign buttons, there are a lot of historical artifacts to see here. 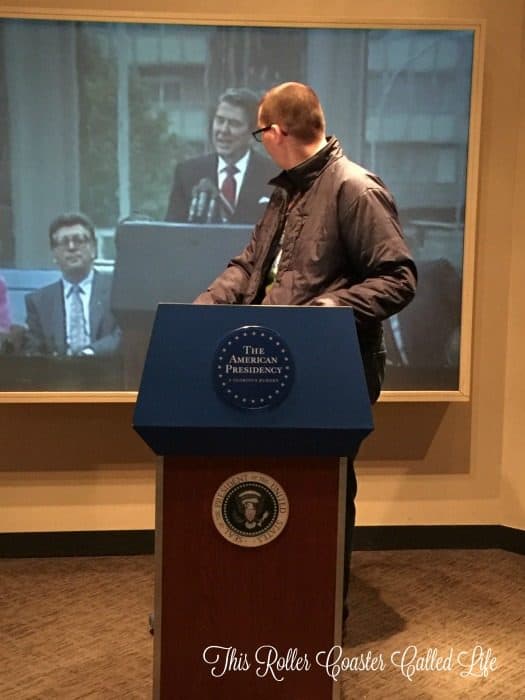 There is even the opportunity to stand behind a mock presidential podium and give a rousing presidential speech.  I was surprised by how even the adults would wait in line to have a chance at this photo opp. 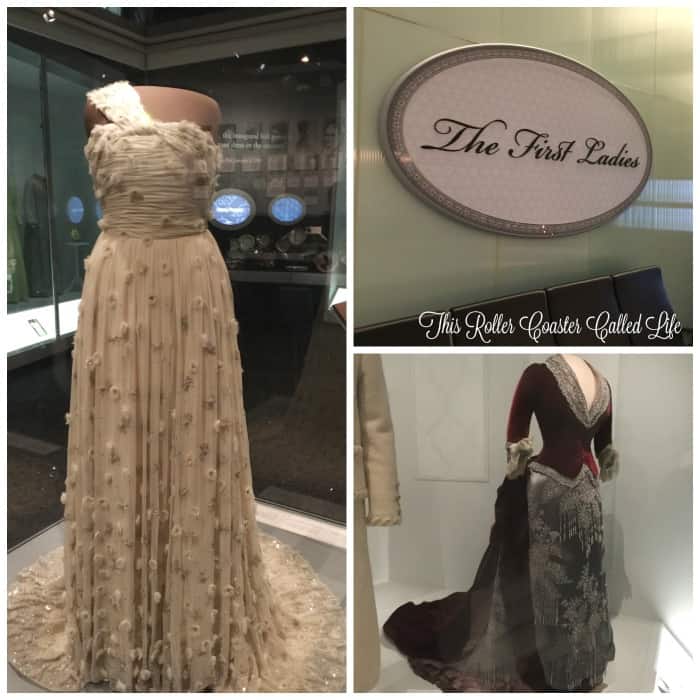 Much to Marvel Boy’s chagrin, Songbird and I found The First Ladies section that was full of dresses and presidential sets of china.  I wish we could have spent longer looking at each item in more detail, but we were running short on time and needed to head back toward the trolley stop. 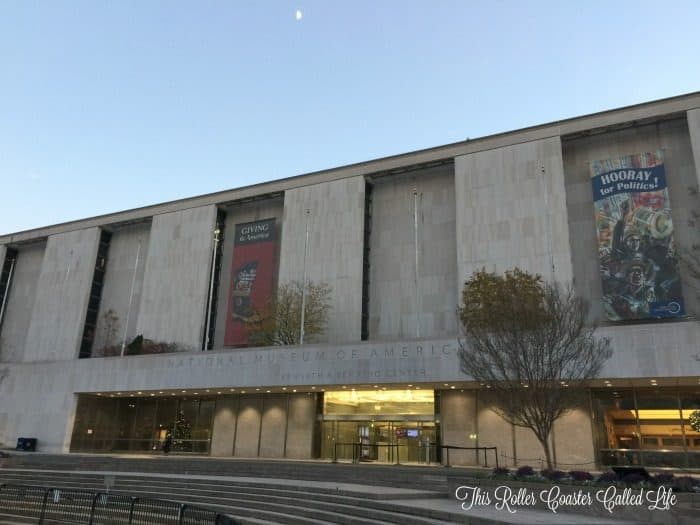