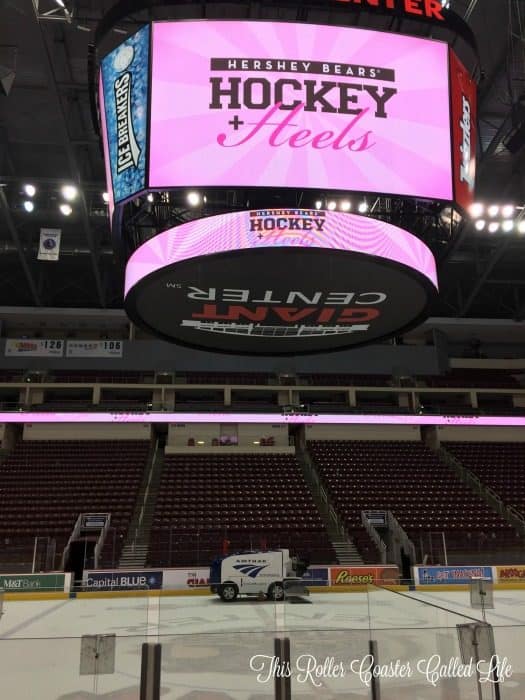 It was Christmas 2015 when my daughter and I first bought four hockey tickets to take my husband and son to their first Hershey Bears hockey game.  We weren’t quite sure how Marvel Boy would like a hockey game, but we knew Don would have a good time.  Who knew that that one Christmas present would turn into frequent trips to see the Hershey Bears play.

When I received an invitation to attend the 4th annual Hershey Bears’ Hockey + Heels event, I eagerly accepted.  It seemed like a great opportunity to learn more about the sport that my husband and son enjoy so much! 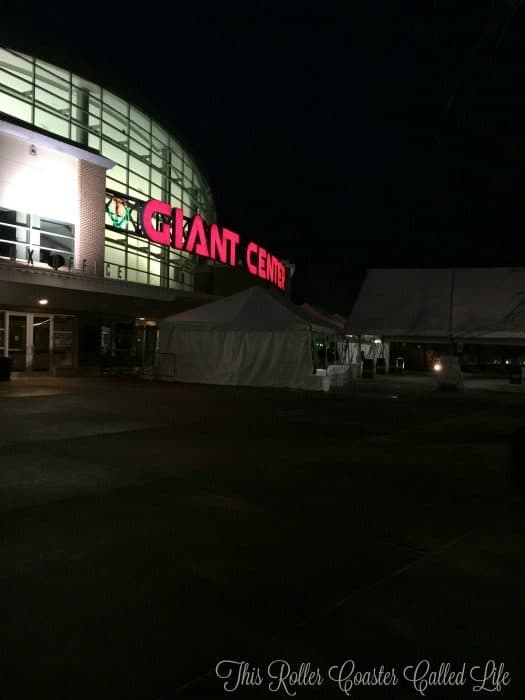 On the evening of January 11, I pulled up to the Giant Center in Hershey, PA.  I was surprised at the number of cars in the parking lot already.  I had never been to an event like this, so I really didn’t know how many people would be here.  I heard later that there were over 200 women at this event. 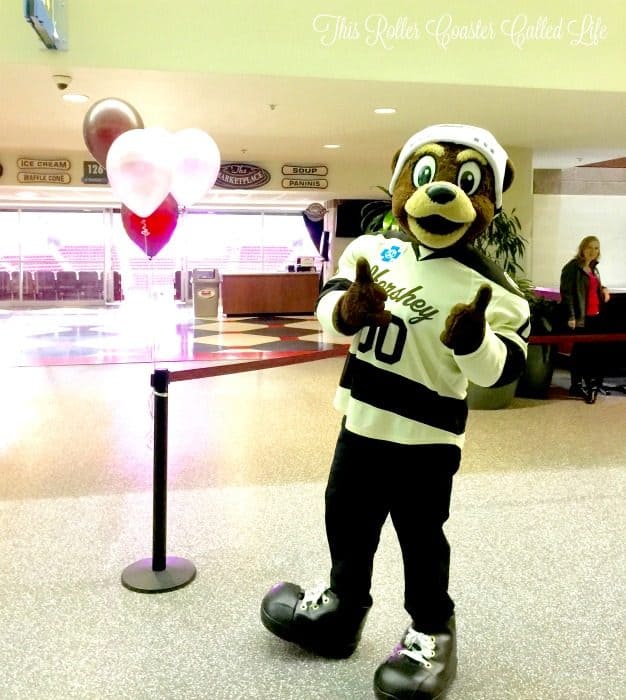 Coco, the Hershey Bears’ mascot, was out to greet the women as we arrived for the Hershey Bears’ Hockey + Heels activities.  After picking up my name tag with assigned group designation, I headed over to where other women were already enjoying snacks. 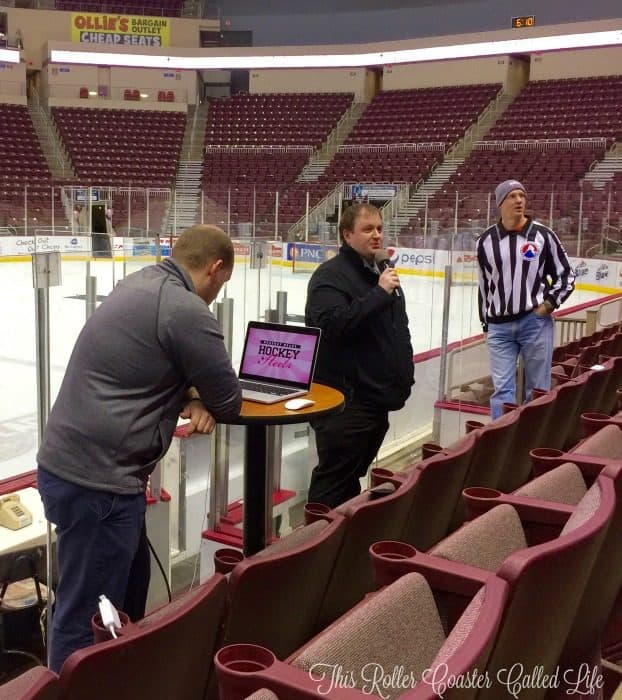 The events began with a little Hockey 101 with Zack Fisch, the Voice of the Hershey Bears, and Bob Goodman, a locally based AHL linesman.  Hockey 101 included simple topics like face-offs, fights, offsides, and icing. 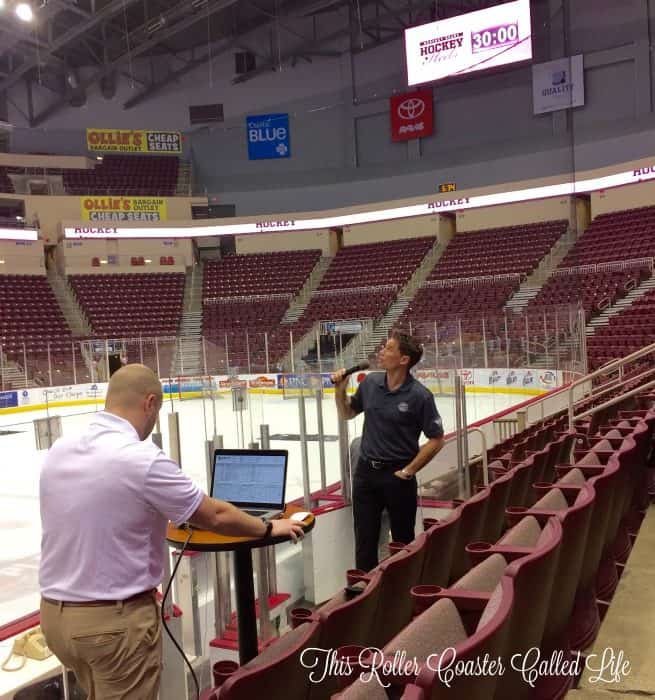 Next, we headed into Hockey 202 and some more difficult subjects with Head Coach Troy Mann and Video Coach Mike King.  As Coach Mann headed into some of the many different play formations, I found myself falling behind and watching the ice as some of the hockey players wanted to start the group demonstrations. 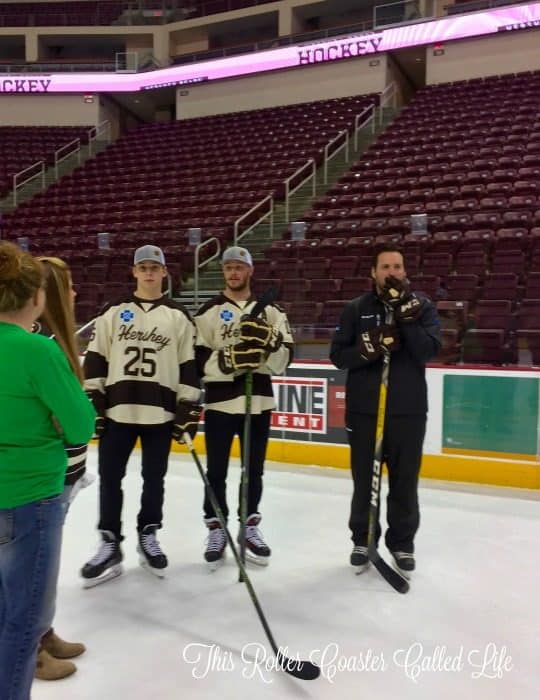 Soon, the four groups divided and headed across the ice to our assigned areas.  The group I was in started off with Zach Sills, Colby Williams, and Assistant Coach Reid Cashman. 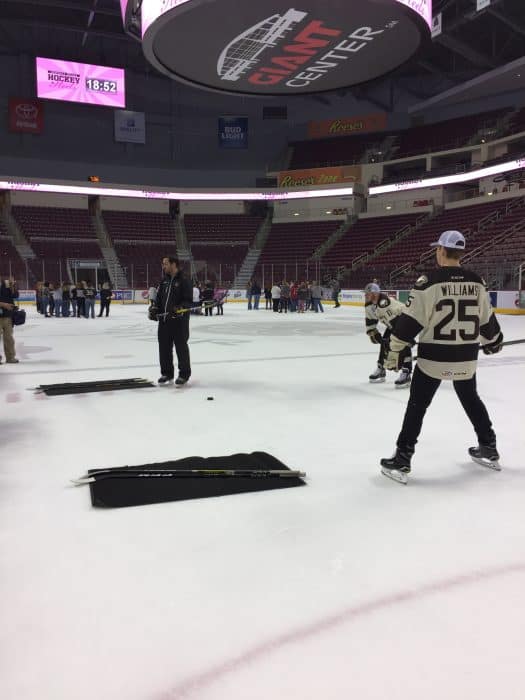 After Zach and Colby demonstrated passing, we divided into three lines to try passing ourselves.  If you look at the far end of the rink in the picture above, you can see one of the other groups lining up to practice shooting. 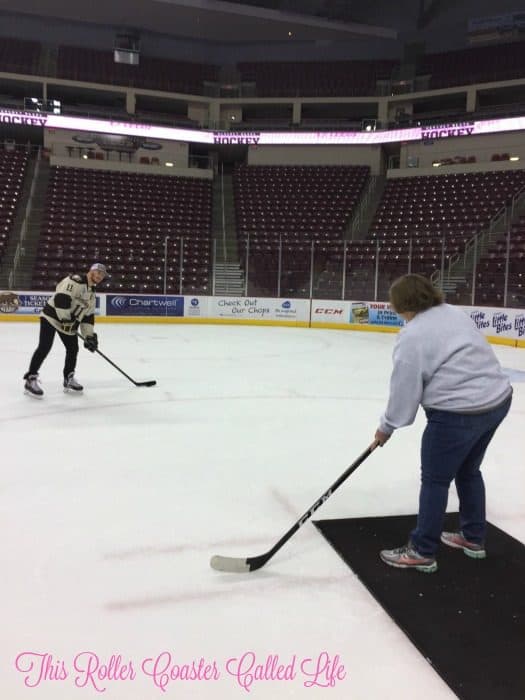 When I stepped up for my turn to try passing, I quickly noticed that my bad eyes with bifocals could not keep up with the speed of the puck coming at me.  I had to guess at where the puck would be because it was not going to be inside any part of my line of vision that was corrected.  Sigh.  However, it was fun getting out there and trying something I had never done before. 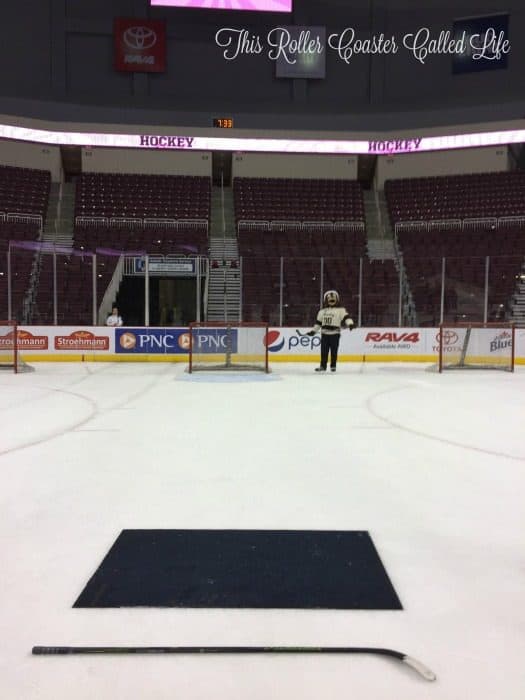 Next up was learning how to shoot with Christian Thomas, Ryan Bourque, and Assistant Coach Ryan Murphy.  Coco was nice enough to field pucks and shoot them back.  Since I didn’t have to track pucks coming toward me, shooting was much easier and more fun. 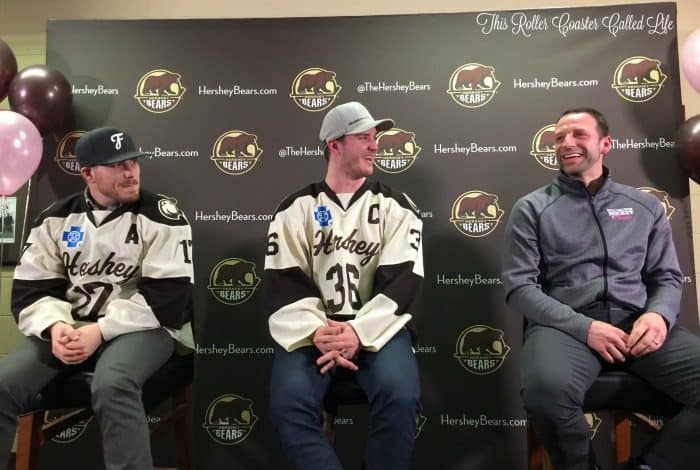 After passing and shooting, our group headed into a Q & A session with Assistant Captain Chris Bourque, Captain Garrett Mitchell, and VP of Hockey Operations Bryan Helmer.  We had the opportunity to ask the trio several questions, and the answers were definitely enlightening.  When asked about what a typical day looked like for each of them, the common thread seemed to be naps.  Practice, lunch, and naps seemed to round out the day.  They were also asked about how early they started skating and playing hockey.  This is where we all started laughing at Bryan Helmer’s response.  Since he asked that it not be shared on social media, make sure to ask him about his early skating career if you happen to run into him.

After the Q & A session, we headed into the “inner sanctum”.  The gym/medical facilities and locker room were the last stops on our tour.  We started off with Dan “Beaker” Stuck showing us some of the items that he uses for training and medical care.  As he talked about the medical staff involved and the care that is taken to provide just the right kind of supplements, I realized that there is a lot of care and concern given to the welfare of each player who plays for the team. 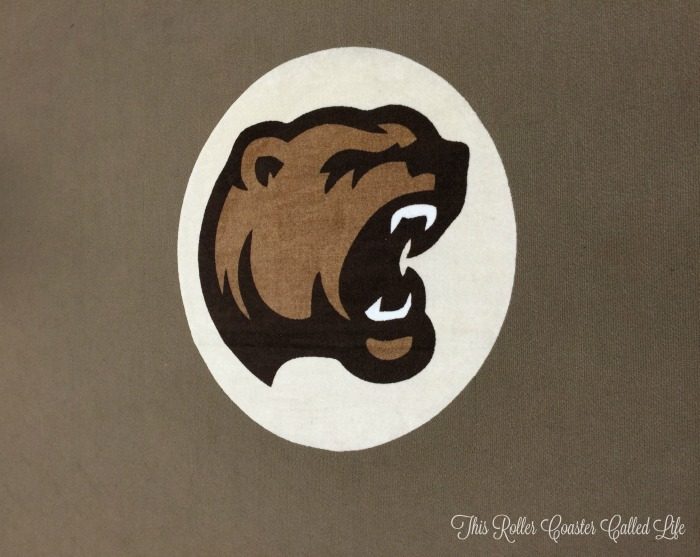 Then, we headed into the locker room where we saw the Bears logo in the middle of the floor.  We were quickly warned to watch our footing and not to step on the Bear.  We gingerly walked around the Bear, but I wondered how it wasn’t stepped on when the full team was in the room getting ready for the game.    They must really watch their feet! 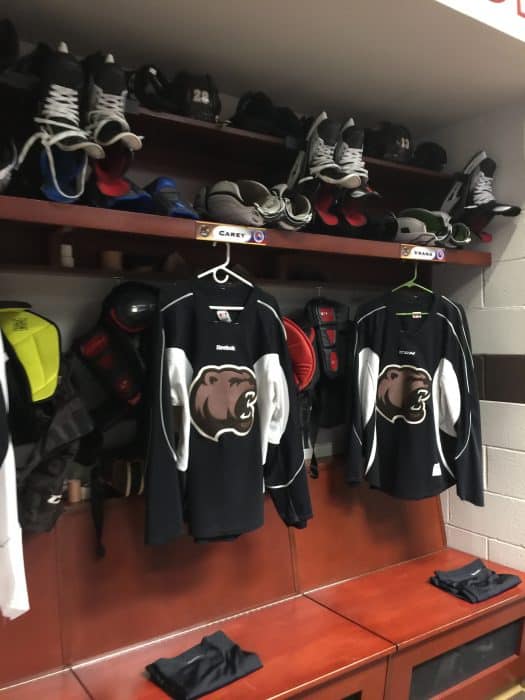 We got to see each player’s stall in the locker room.  Here are Paul Carey and Jakub Vrana’s places. 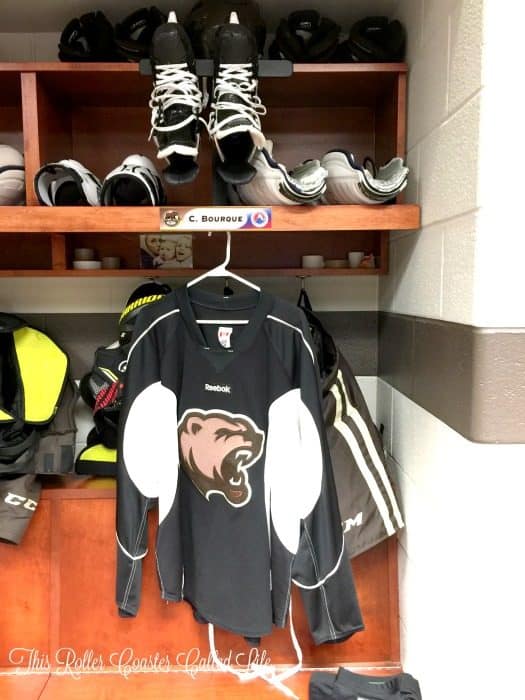 Of course, I have to included the stall of my son’s FAVORITE player!  My son still remembers that Chris Bourque scored the winning goal at the first game my son ever attended, and I’m sure Chris will always be Marvel Boy’s favorite player! 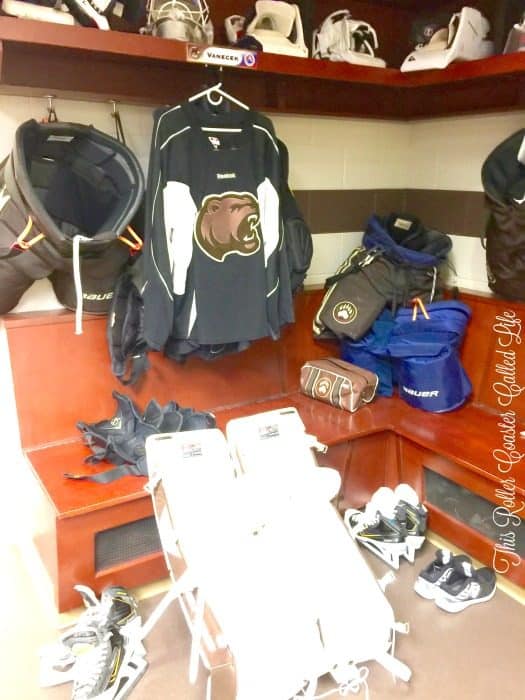 And here is the stall for Vitek Vanecek, one of the goalies.  Look at ALL the extra equipment he needs!  BTW, he had an awesome game last night!

After the tour, there was a light meal served, and the players involved came out to eat, take photos, and chat with those of us there.  This was a fun event!

What a great way to get women involved in a sport that they may or may not know a lot about.  Maybe their spouse or child (as is my case) is a hockey fan, and events like this can bring us a little more up to speed with the sport.  I personally had never seen much hockey before I met Don many years ago.  I lived in the South, and hockey wasn’t a big thing.  After this event, I know a little more about hockey, and now, it makes a little more sense to me.

If this is an event that you might enjoy, keep an eye out for ticket sales in the fall.  If you are not in Hershey Bears territory, I understand that other teams have events like this.  Make sure to check it out! I know I hope to nab a ticket for next year!

Disclosure:  I was invited to this fun event.  All opinions are my own.