Welcome to this month’s Blogorail Peach Loop. Today to help celebrate the 100th anniversary of the National Park Service we’re sharing some of our favorite National Parks. 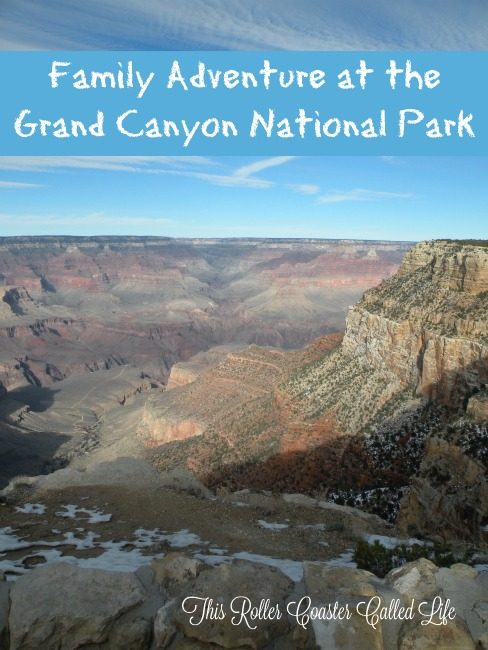 Several years ago, we moved to Flagstaff, AZ.  Flagstaff is a beautiful area in the high desert.  The high desert is a totally different place to live than many other places.  There are cactus and pine trees growing together.  It is dry during the summer but can have tons of snow in the winter.  The Grand Canyon is very similar and can wildly in temperature and weather from the rim to the canyon floor.  In fact, I even heard it said that the Grand Canyon makes its own weather. 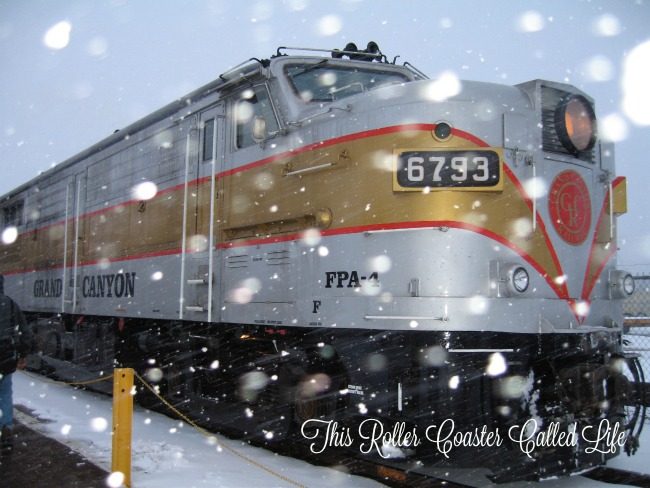 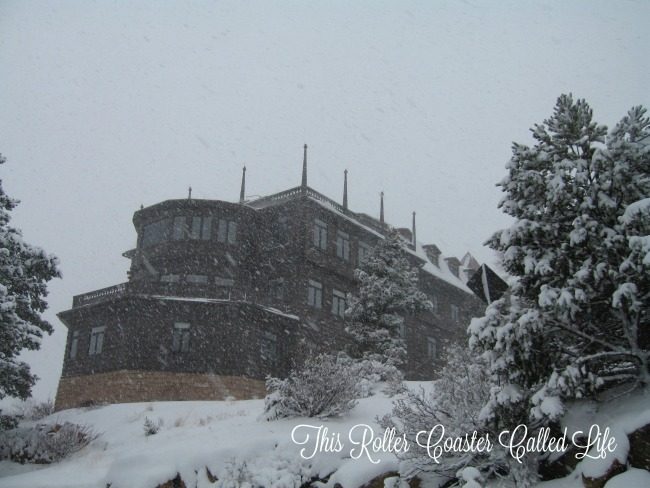 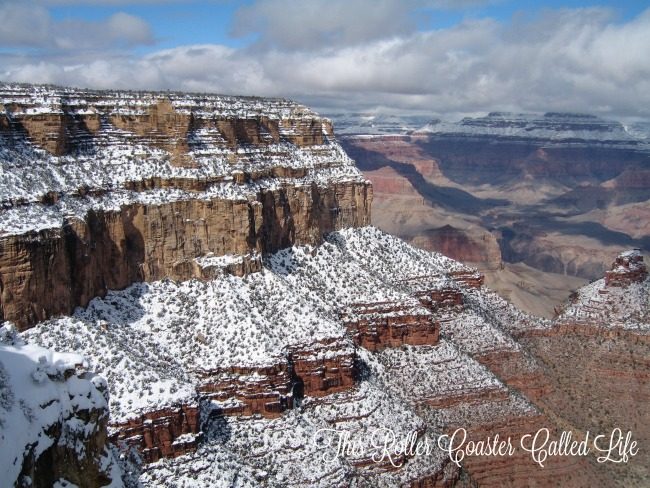 The thing about the Grand Canyon is that it never looks the same way twice.  We went to the canyon many times over the three years we lived in Flagstaff, and there was always something different about the landscape. 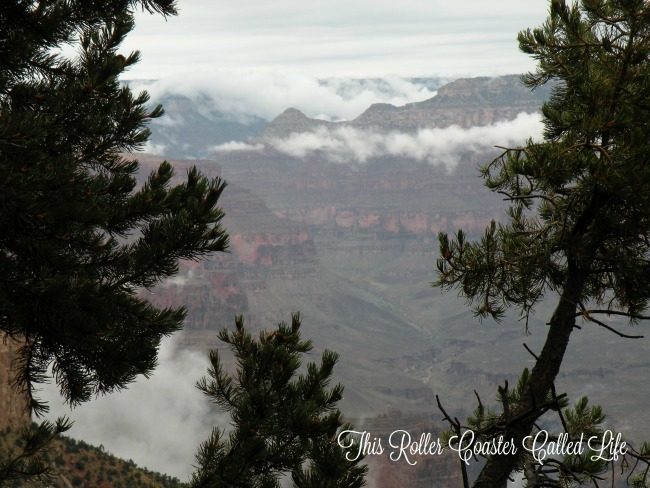 Whether the snow was falling or the fog or clouds were rising out of the canyon, there was always some new beauty to see. 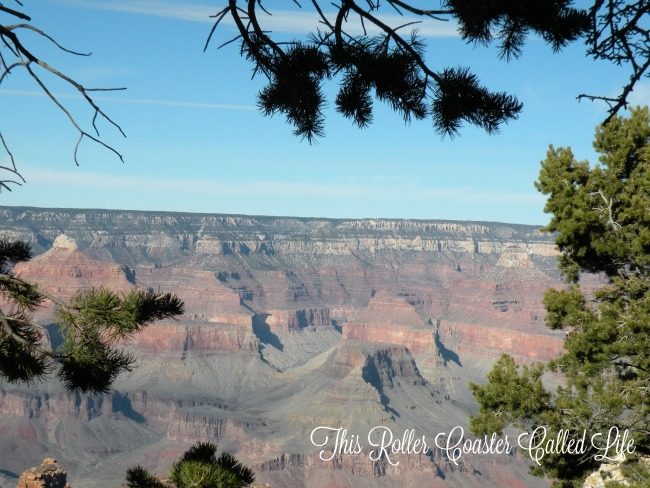 Even if it was “just” a clear, bright, sunny day.  The colors always seemed to “pop” in a different way each time. 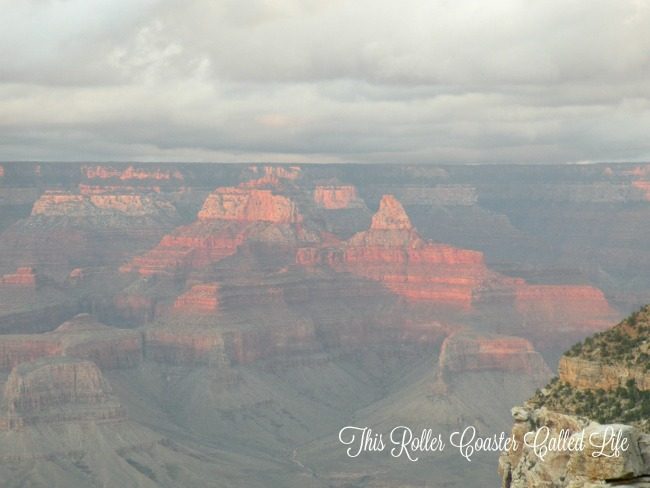 My favorite time, though, was sunset.  It seemed like the colors changed from moment-to-moment as we watched.  I love how the rocks turned red and orange right before our eyes. 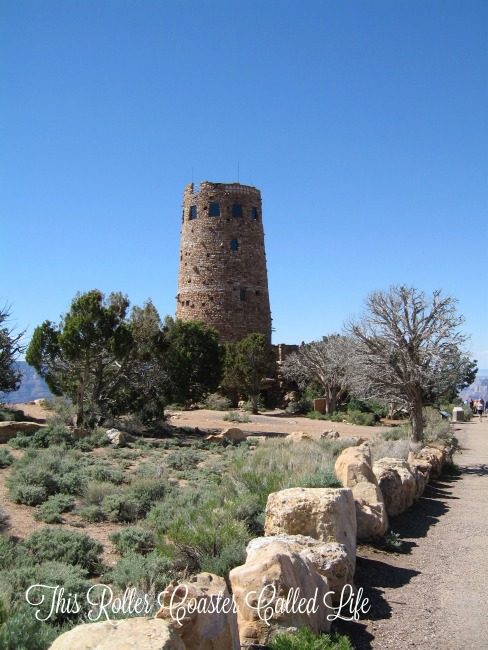 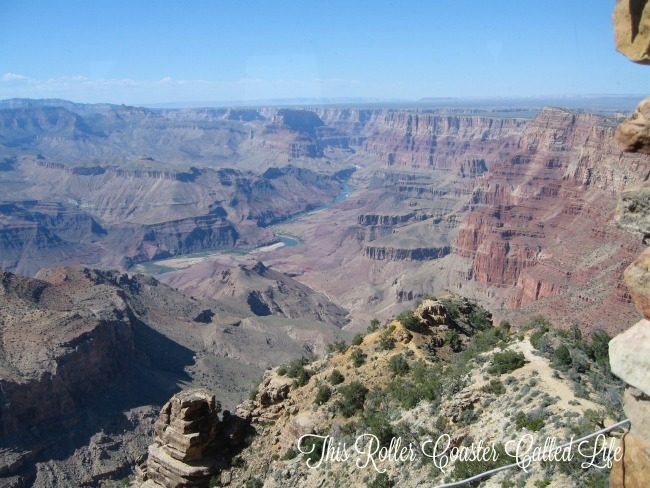 The view from the Watchtower overlook is beautiful, as well. 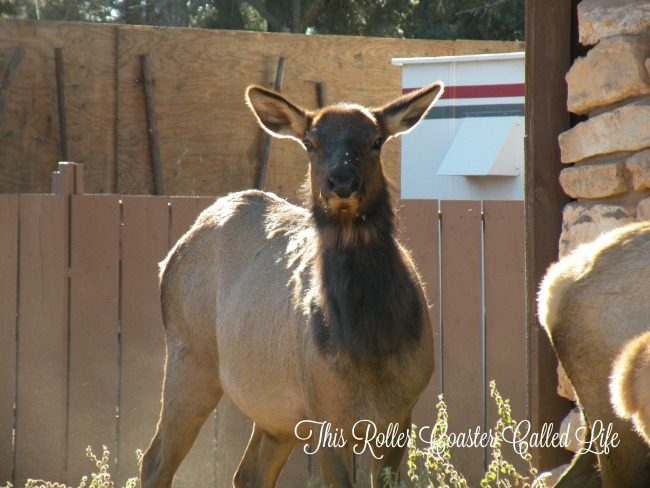 Besides seeing the beauty in the canyon, there is sometimes some wildlife to look at, too.  Just don’t get too close.  While some of my photos may look like I got up close, I did use my telephoto.  That is my service announcement for this post… 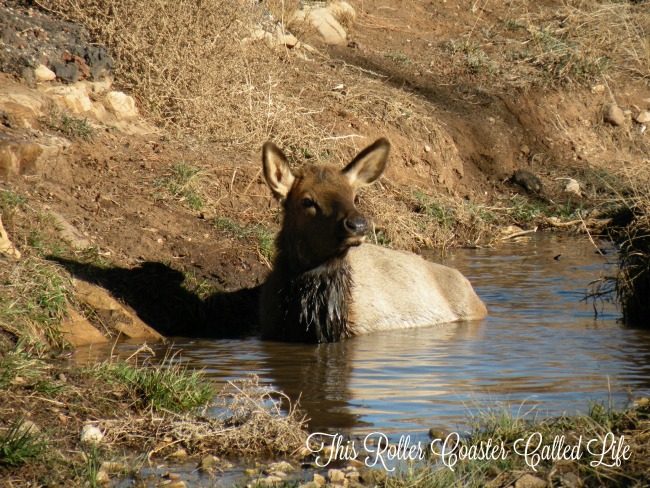 Sometimes, you can see the animals wandering on the road and just off the road.  Other times, they are right up by the lodges on the rim of the canyon. 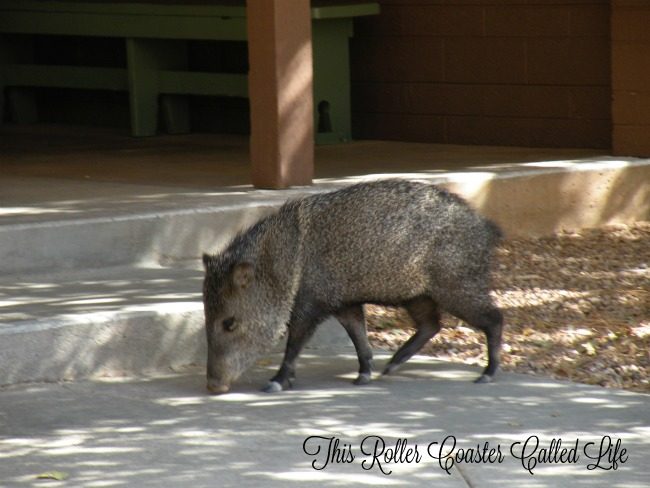 This guy, we saw the time we went camping.  A few of them were wandering around.  They did keep to themselves. 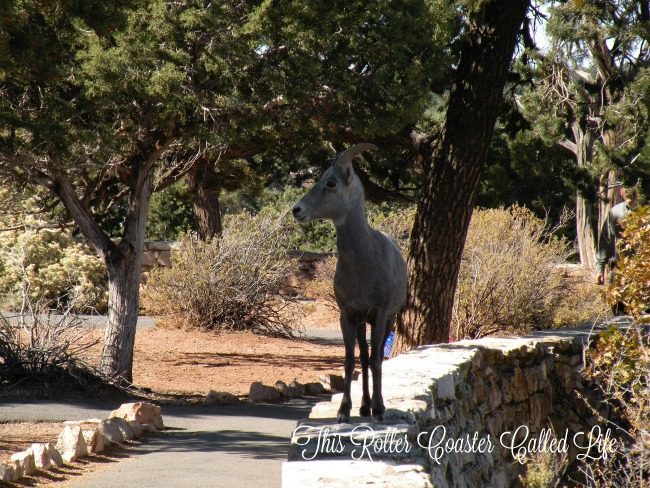 This one was right up on the rock wall at the rim near the El Tovar.  I swear he wanted his profile taken because he kept turning to what I’m assuming he thought his best side was. 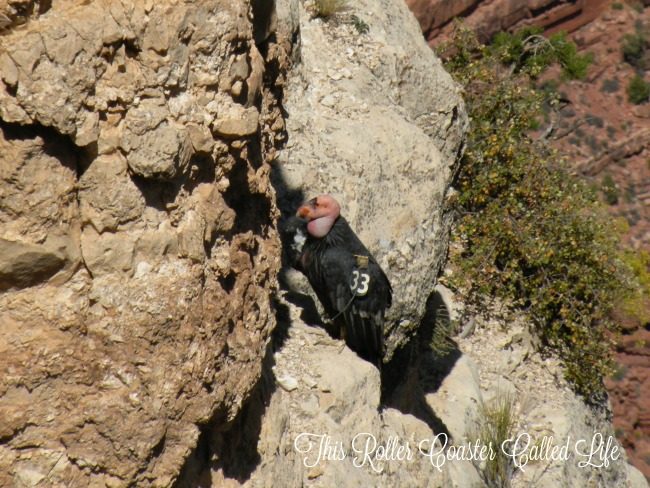 The Grand Canyon National Park has several educational programs and talks.  We attended a few during our time there, but my favorite was the talk about the re-introduction of the California Condor.  You can read more about that on the NPS website, and I highly encourage you to do so.  There is also a podcast at that link.  Over the many trips, we made, we saw Condors several times.  We even saw young Condors practicing their flight.  It is definitely something to behold when you know that the California Condor population at one time was only 9, or some ridiculously low number.

There are other educational opportunities, too.  During busy times, the Native Americans usually have some cultural dances near the El Tovar.  The dances are certainly something to see if they are happening while you are there.  As a side note, I’m not including photos of the Native dancers as they don’t like having their pictures taken.  At the dance, you will see a bucket for donations if you are going to take photos, but it is considered rude to just take a photo.  In fact, the group that was dancing one of the times we were there took a picture with us.  However, it is a cultural thing, like with the Amish.  While some of the younger Native Americans aren’t as particular about pictures, the older ones are, so it is always safer to just take your photos of the scenery and animals.

I should say something about walking the trails at the Grand Canyon…  Always take water with you.  Take more than you think you will need for when you are hiking.  The temperature changes quickly, and you don’t want get dehydrated or overheated.

There is so much to see throughout the Grand Canyon National Park, but if you are looking for other National Parks or Monuments in the Flagstaff area… 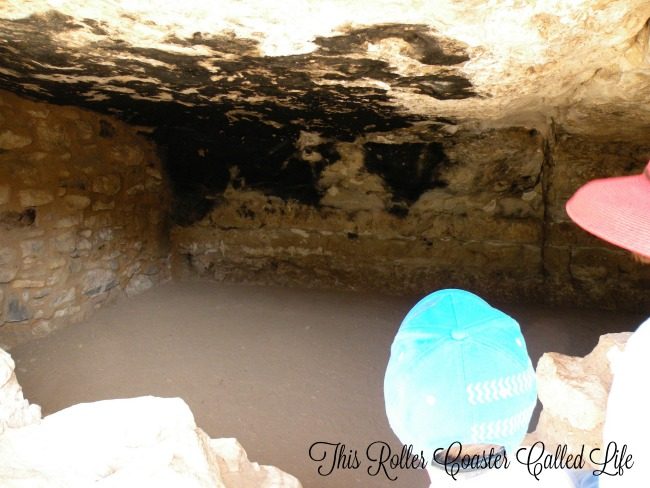 Walnut Canyon National Monument is located near Flagstaff.  There is an easy trail along the rim, and that is the main place that we walked.  However, we once took a tour down the trail to the dwellings, and we were able to get a close look into the dwellings.  In fact, we were told that hikers are encouraged to take shelter in the dwellings in case of a lightning storm.  Just remember, do no harm and leave no garbage. 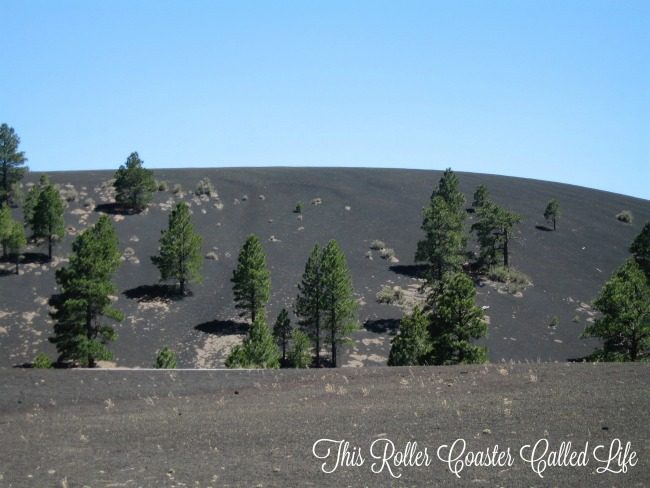 Sunset Crater Volcano National Monument is also near Flagstaff.  One doesn’t really think about the area having volcanic activity, but if you drive out through New Mexico into Arizona, you can see a lot of black lava rocks along the way.  There are easy and hard trails at this monument. 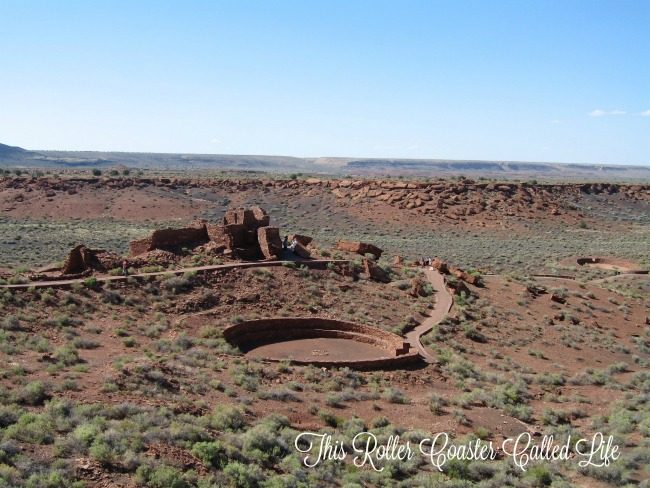 There are so many National Parks and Monuments to see in the small area surrounding the Flagstaff, Arizona area.  What a great place to take a family adventure!

For more great National Parks,
check out the other great posts from the Blogorail!