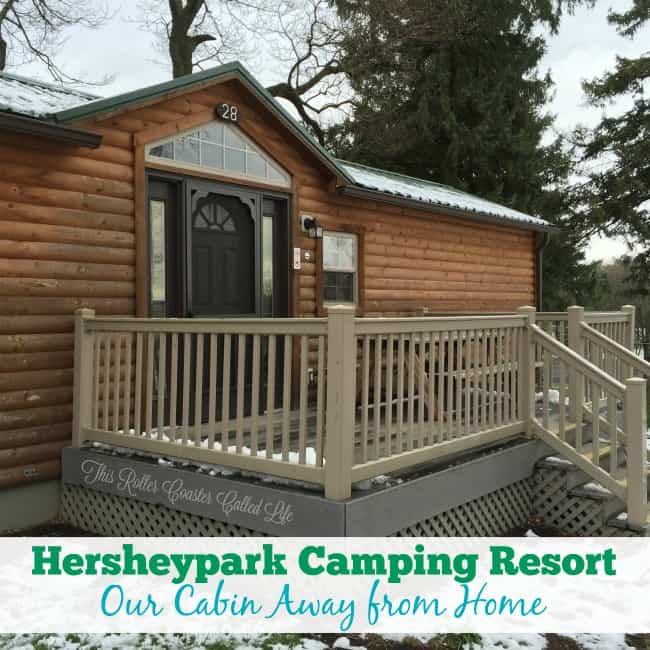 One of the things I like about my birthday is that Hersheypark is usually open the weekend before for their Springtime in the Park.  This year was no exception.  The family and I were happy to try out a deluxe two bedroom cabin at the Hersheypark Camping Resort.  [FTC: As a part of the Sweetest Moms 2016, I received one night free in this cabin.]

We woke up Saturday morning and hoped to head out early to spend the day at ZooAmerica.  However,  as you can see in the picture above…  It was snowing!  It was much colder than I had hoped, so we stayed around home longer than planned and headed out toward Hershey in the afternoon. 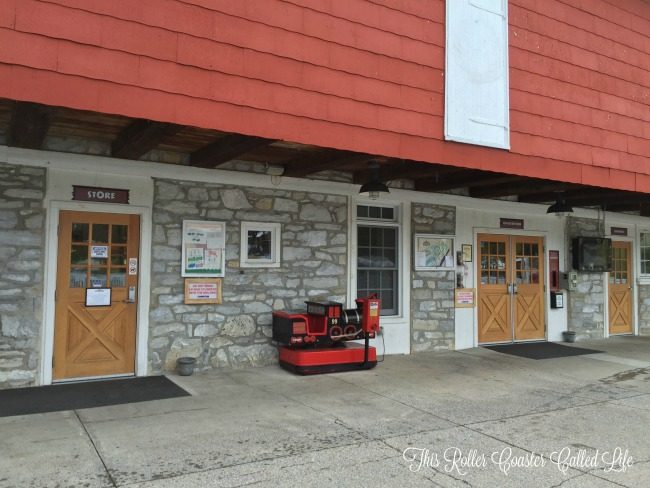 After we arrived at the Hersheypark Camping Resort, we found our way to the building that houses a store, registration, a laundry, and a game room.  We started out by heading to registration where we were handed a key to the cabin. 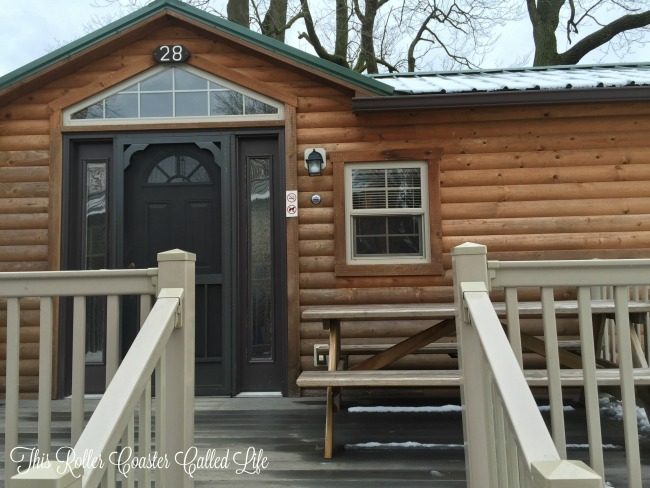 After getting our key, we drove up to the cabin.  As you can see, there is a nice porch and picnic table for enjoying the outdoors.  Off to the side, there was also a small fire pit.  As it was snowy, we opted to skip the outdoor picnic and head inside. 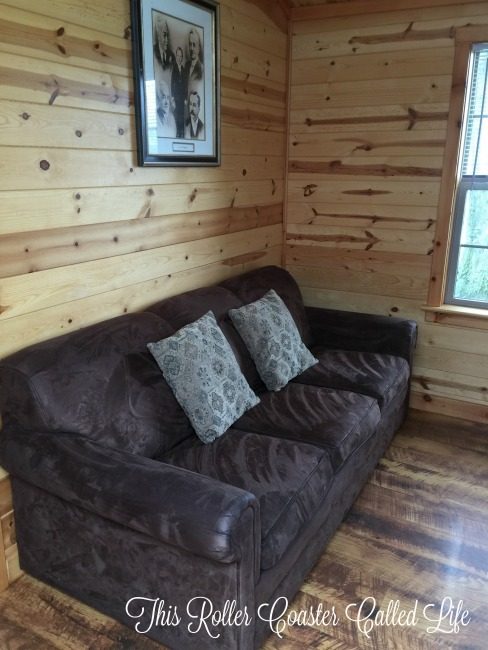 The first thing we saw as we entered was this comfy-looking couch.  Also in this room was a table with chairs and a small bench to use with the table.  While it is a small table, we were able to comfortably fit all four of us around it. 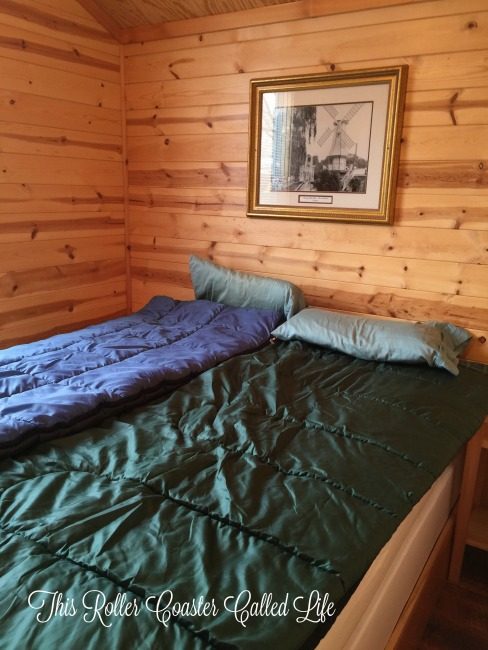 To the left of where we entered was a small room with a double bed.  There was also a dresser and a small bedside table in this room. 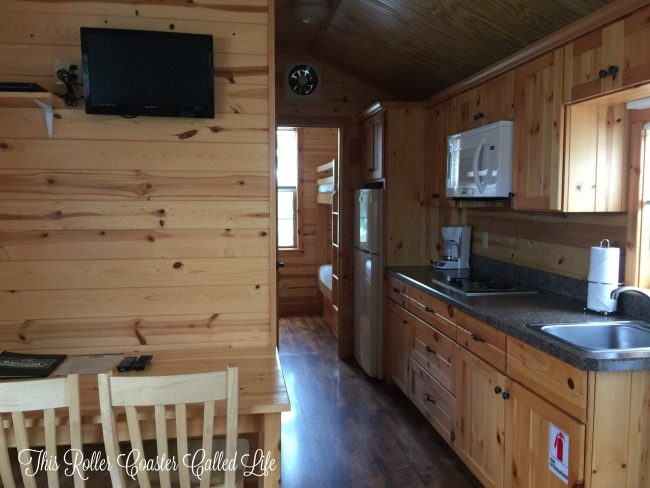 To the right of the door is the kitchen area.  For a cabin like this, I thought the kitchen was a great size.  Much bigger than I thought it would be.  As you can see, there is a very large refrigerator down at the end.  In fact, we were able to put a leftover pizza box in the refrigerator with plenty of extra room. 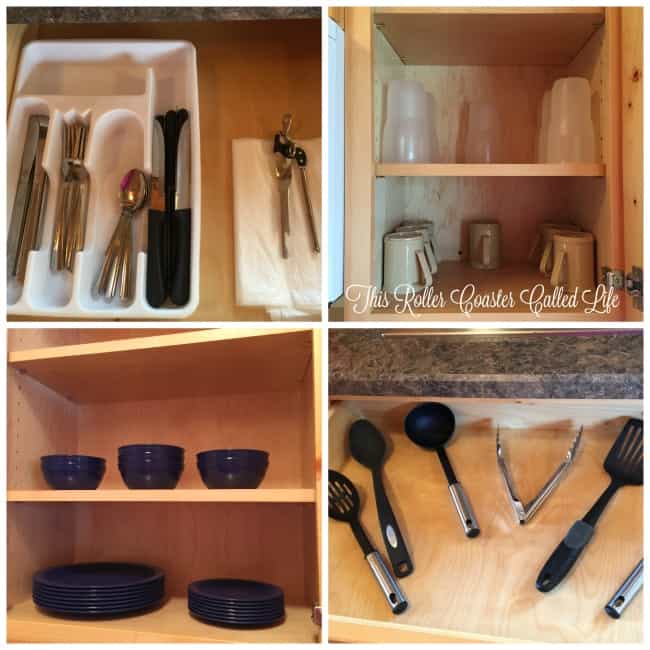 This kitchen comes with most of the utensils needed to cook to your heart’s content.  This setup is really nice for the kids as we can stock their favorite foods, so they can eat what they would normally eat at home. 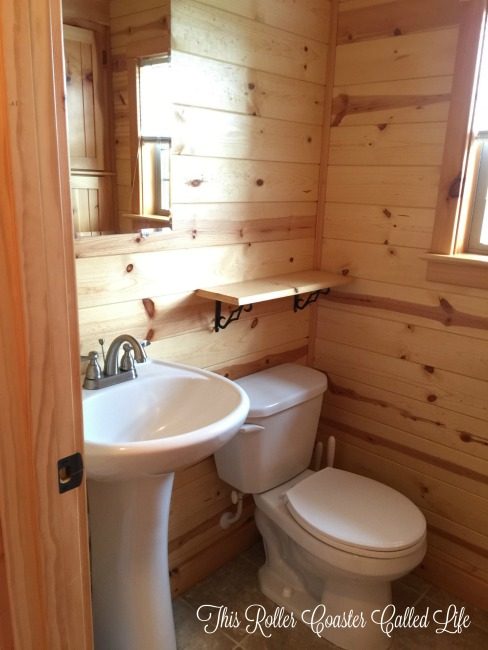 There is a small bathroom in this cabin, and it also has a small shower.  This really isn’t “camping” per se.  It’s more like “glamping”.  Just make sure to bring your own towels, sleeping bags and/or sheets, and pillows. 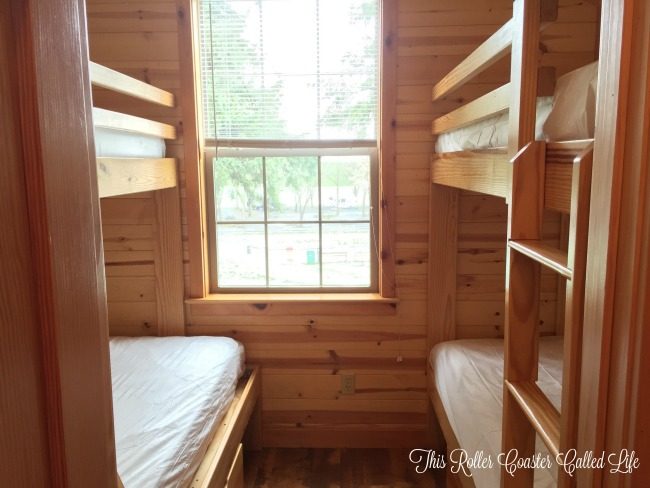 At the far end of the cabin is where the kids slept.  There are three single bunks and a double bunk, so the cabin could conceivably sleep 7 people.  The kids each happily grabbed a top bunk.  No fighting over the top bunk on this trip. 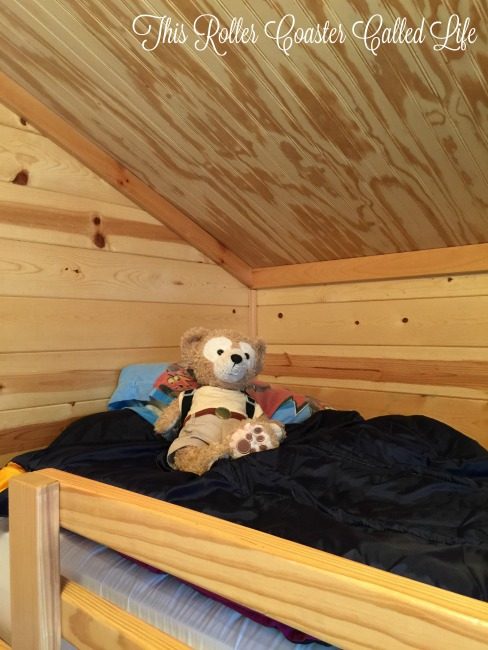 In fact, Duffy grabbed his space on the top bunk and looked rather comfortable.  This setup seems like a great option for those heading to Hersheypark and have more than 4 people in their family!  Plus, with the kitchen, you could save some money on food. 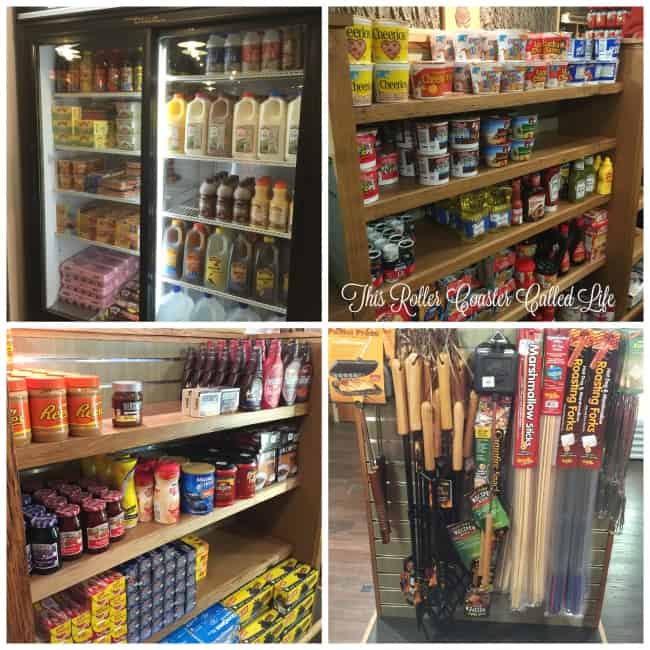 We did need to pick up a few food items and had no problem finding simple breakfast foods at the store in the campground.  If you don’t have time to head over to the grocery store, the camp store is an option. You can even pick up s’more-making utensils at the campground store.  Looking for chocolate?  There is plenty of chocolate, s’more-making supplies, and souvenirs at the store. 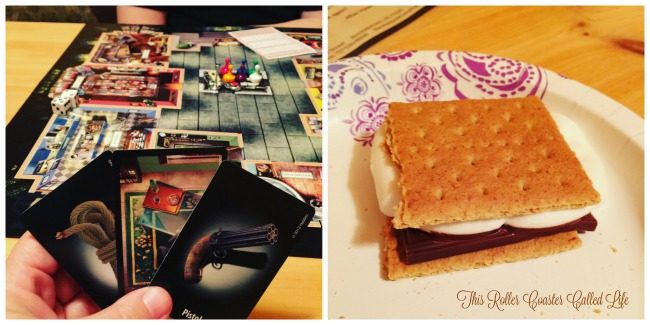 Since the weather wasn’t cooperating that first day, we brought a game with us to play.  It was nice to be inside the warm cabin (a/c and heat).  We ordered pizza, made s’mores in the microwave, and played Clue.  We had a great time!

Sunday was supposed to be nicer, so we headed over to Hersheypark first thing in the morning.  It was so nice to be able to take the bus from the resort to the park.

There are so many perks to the Hersheypark Camping Resort.  First of all, there are several different ways to enjoy the campground.  Want to tent camp?  They have space for that.  Have an RV?  They have RV spots.  They have four different types of cabins, too, at different price points depending on size and whether or not there is a bathroom inside the cabin.

If you read the reviews, you will see that train tracks are mentioned.  There is an active train line that goes right by the campground.  It wasn’t really loud inside the cabin, even though the cabin was fairly close to the tracks.  I think it would be louder if tent camping up by the cabins.  The trains didn’t bother me, but if you are sensitive to noises while sleeping, you might want to bring some ear plugs.

Having said all of that, I’d love to take the kids back to stay in the cabins during the summer when the swimming pool is open.  We would love to partake of more of the outdoor spaces like having a picnic at the cabin or roasting our s’mores over a campfire.

Disclosure:  I did receive one night’s lodging at the Hersheypark Camping Resort as part of the Sweetest Moms 2016.  I LOVE Hersheypark, and so do my kids.  Hershey PA is without a doubt the Sweetest Place on Earth!  All opinions are mine.