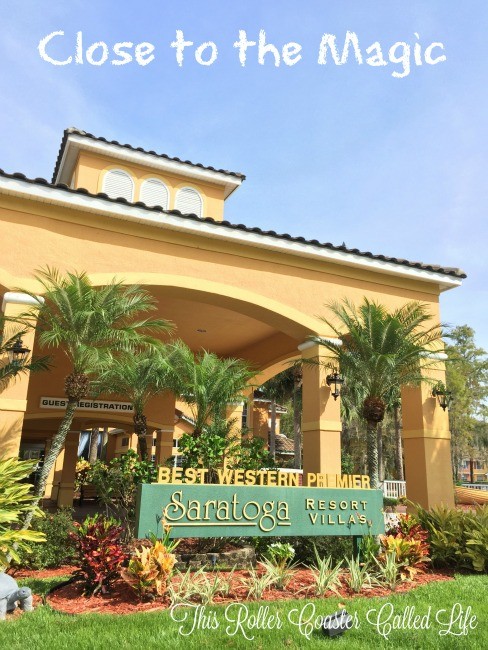 For our vacation last year, we went to Cocoa Beach, Florida, on a short Disney cruise (cruise posts to come later), walked a 5K for Give Kids the World Village, and did a marathon day at Walt Disney World to see the Osborne Family Spectacle of Dancing Lights.  When we got off the cruise ship, we needed a central location to call “home” for the remainder of our time in Florida.  Kissimmee fit that bill.

We stayed two nights at the Best Western Premier Saratoga Resort Villas.  In the interest of following FTC standards, I must disclose that this stay was comped in hopes I would share our experience with you. 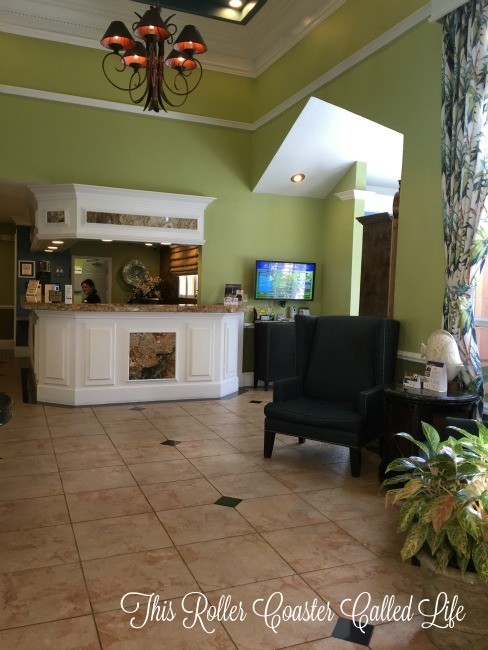 When we arrived, we went into the lobby to check in.  The staff members were very nice and helpful.  When we needed some directions, I asked one of the ladies at the desk.  I wanted to avoid the interstate as it would have been backed up at that time.  She told me the way she would go as a local person, and it was so easy and not very crowded at all. 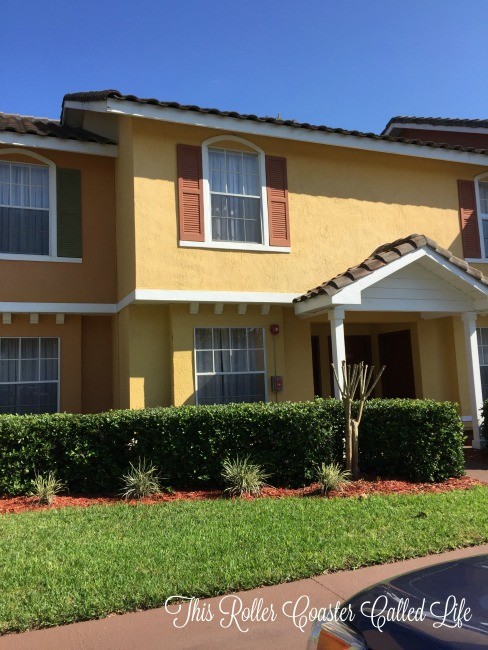 The Best Western Premier Saratoga Resort Villas looks like a gated townhouse community at first glance.  We stayed in the two-story villa pictured above.  There was ample parking to be able to park right in front of the door. 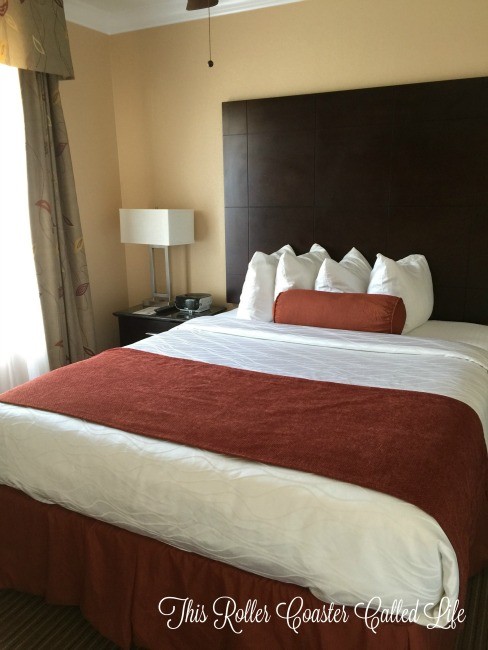 This particular villa is a two bedroom, two bathroom loft villa.  As we walked in the front door, there was a bedroom immediately to our left.  Attached to this bedroom was a small bathroom with shower. 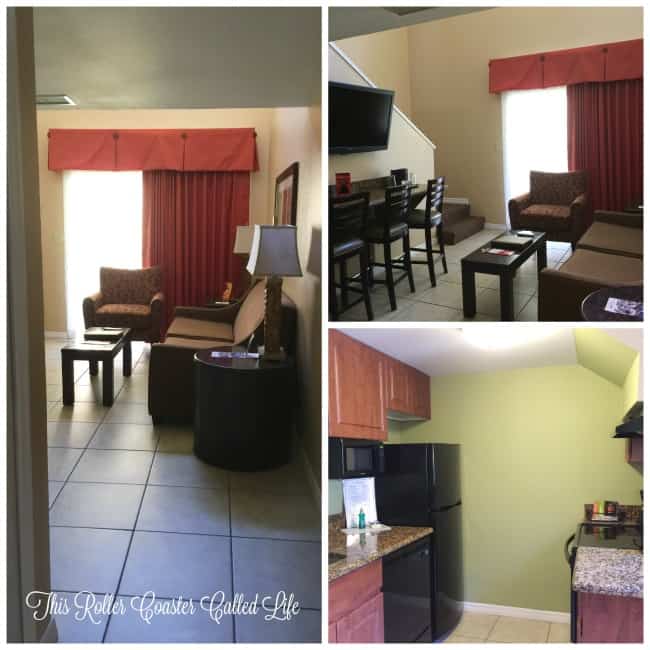 As we walked past the bedroom, we could see into the living area.  Just as we reached the living area, there was a small kitchen on our left.  While the kitchen is small, it is more than adequate to cook meals here for a week if you wanted to.  If we didn’t want to cook, there is also a restaurant on property.

At the back of the living area are the stairs going up to the loft and second bedroom, as well as the sliding door that goes out to the patio. 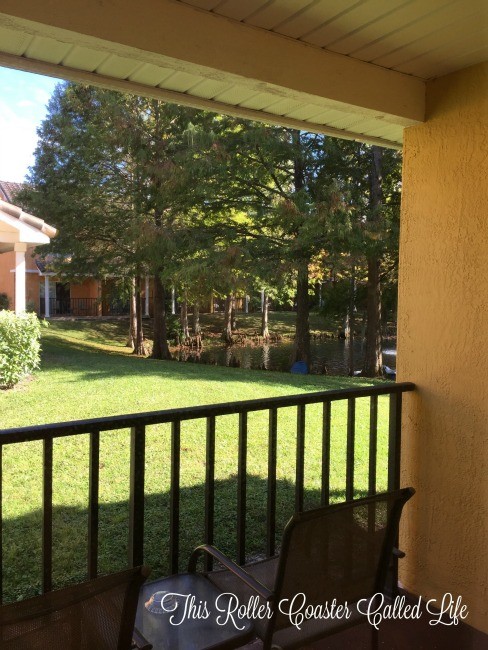 And talking about the patio…  Look at the view!  There is a small lake/pond out there.  One of my first thought was whether or not there were gators out there.  Not out of fear, but because I really wanted to see one live and in the wild. 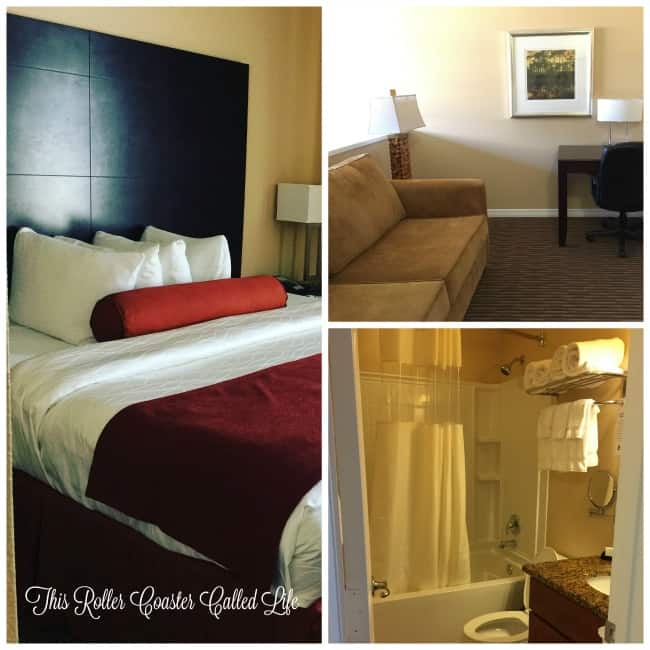 Next, we took the stairs up to the loft and master bedroom.  The loft area would be a nice place to sit and read.  The bathroom up here has a tub and shower.  Talking about the tub, this is a deep tub!

After dropping our things off, we headed out to pick up our race packets over at Give Kids the World Village.  The Best Western Premier Saratoga Resort Villas is extremely close to Give Kids the World, Walmart, Chick-fil-A, and Medieval Times.  After picking up our race packets, we headed out to find the Disney Character Warehouse to see if we could find any bargains on Disney Parks merchandise.

We had a wonderful sleep and got up the next morning to go do the 5K.  I have to say that Marvel Boy did a marvelous job!  We completed the 5K in just over 55 minutes and then headed to the bus to be taken back to our car.  All Marvel Boy wanted to do at this point was to go back to the villa and go swimming.  We talked him into driving through Chick-fil-A to grab some food to take back to the villa.  We ate our food, and the kids got ready to go swimming. 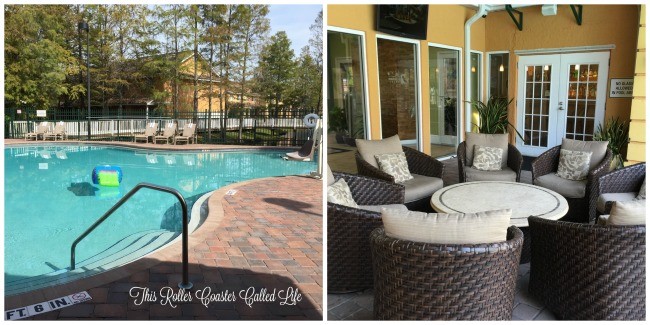 The pool is located behind the lobby, and there is a really nice sitting area there.  This was not a really busy time of year, and it was the middle of the day.  This means that the kids had the pool to themselves!  They had a ball! 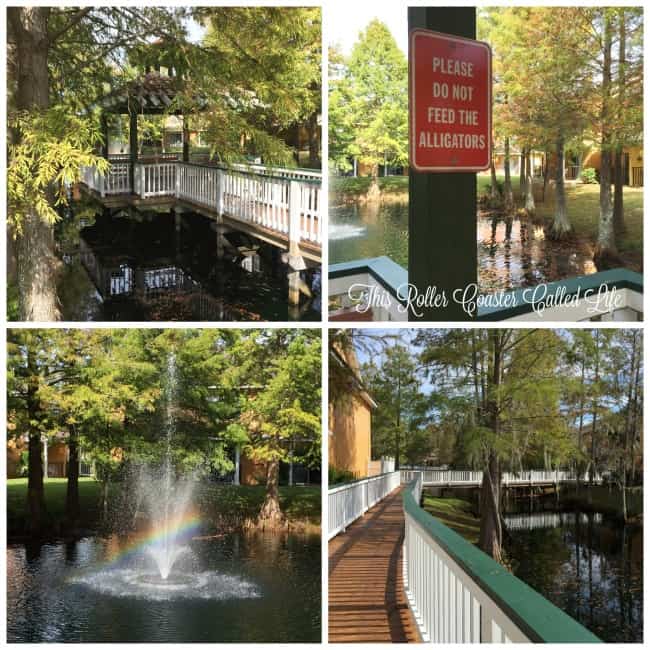 I really didn’t want to go swimming because I wanted to take a walk through the beautiful grounds of this resort.  Some of the buildings are connected by these walkways over the water.  After seeing the sign about not feeding the gators, I asked an employee if they had any gators here.  She told me that she would hear reports now and then of a small gator that would be seen early in the mornings.  Alas, I never got a chance to see the gator while I was there.

Besides having a restaurant, there is also a small game room and a guest laundry.  This was the perfect place for Marvel Boy to relax and recharge his batteries before heading to Walt Disney World for a marathon day.  Those with kids on the Autism Spectrum will definitely get the need for that break while on vacation!

The Best Western Premier Saratoga Resort Villas is a nice secluded place, seemingly separate from the tourist area while being close to almost everything.  It didn’t take us too long to get to Walt Disney World from the villas.  Isn’t that what we all look for in lodging in a touristy area?  Secluded while being close to the action?

Disclosure:  We did receive two nights comped lodging for the purpose of this review.  All opinions are our own.