Welcome to this month’s Blogorail Peach Loop. Today we are discussing museums that your family needs to visit. 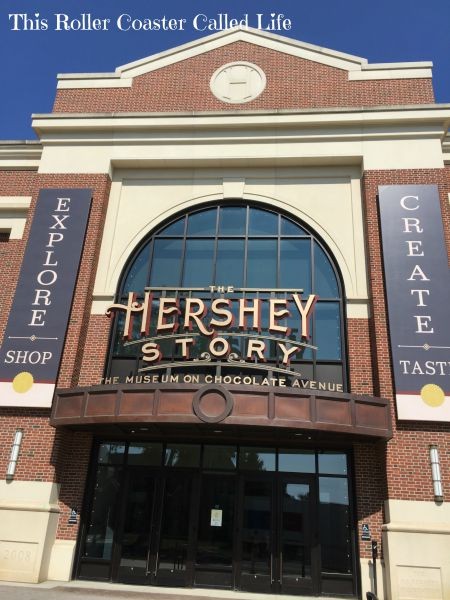 Hershey, PA is one of the sweetest places on earth, and learning about Hershey’s beginnings can be just as sweet!  Find out why Hershey was and still is much different than other industrialized towns.  It’s not just about the chocolate!  But since I’m mentioning chocolate, make sure to grab a cup of hot chocolate and settle in.  There’s lots of pictures ahead! 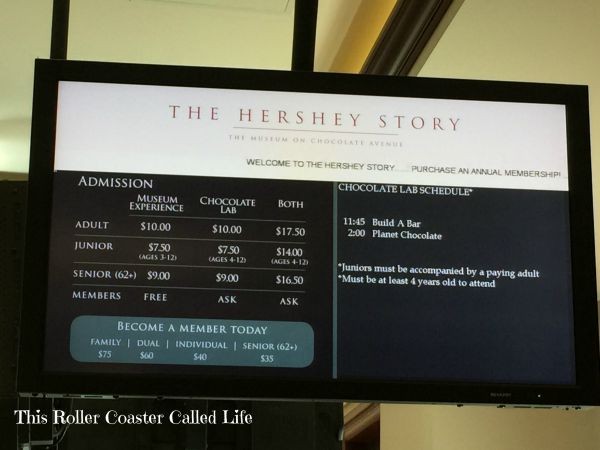 The Hershey Story is located on Chocolate Avenue in “downtown” Hershey, PA.  The Hershey Story is not an “all-day” museum, but it is a lot of FUN and full of learning!  There are a lot of things I’ve learned over the two times that I’ve been there that have just blown my mind away. 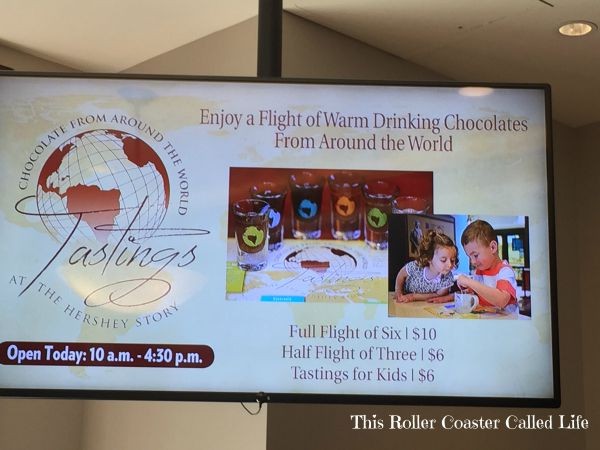 Let’s start with a short tour of the non-museum offerings before heading into the “meat” of the museum. Hint:  Remember the word in italics for later.  The Hershey Story talks a LOT about chocolate.  One of the sections, called Tastings at the Hershey Story, offers a flight of drinking chocolates from around the world.  As you can see above, this is an additional charge. 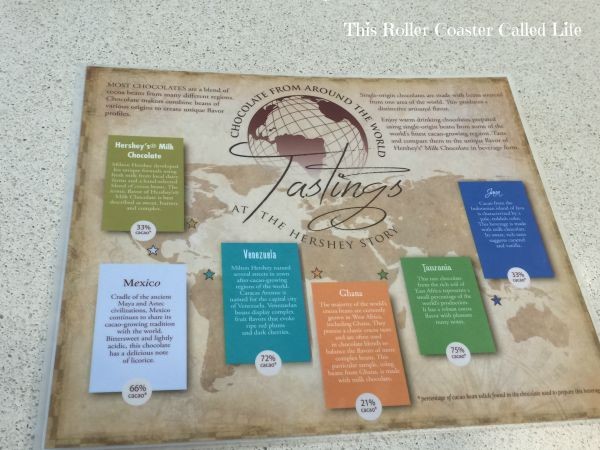 This is a mat that shows the countries where the chocolate drinks come from:

My family and I did the tastings last year when it was in a different location.  Lets just say that some are much better than others, but it is neat to be able to see what other countries value in their chocolate.

The Hershey Story also has a cafe called Cafe Zooka.  It serves fairly simple fare, but it also has S’mores.  Who needs much when there are s’mores available, right?  There is also a gift shop with some really cool gifts PLUS chocolate!  I don’t think you can come to Hershey without taking some chocolate home with you.  At least, we can’t! 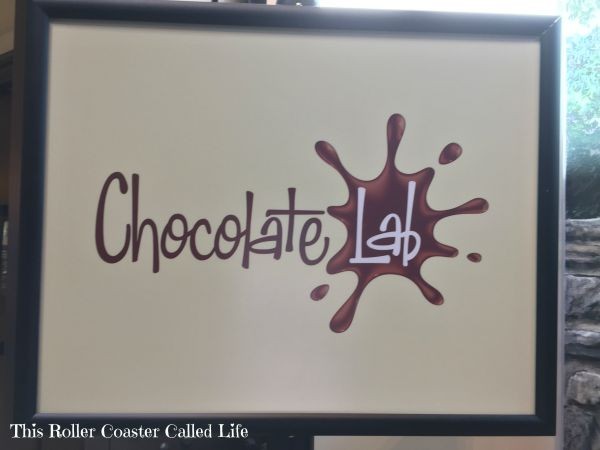 The Chocolate Lab is an additional cost as you can see on the pricing further up in this post.  We had never done the Chocolate Lab before, but we did have a coupon that we got with our Hersheypark season passes this year.  So, since the only chocolate bar lab for the day was getting ready to start, we decided to use our coupon.  Honestly, the money I spent was well worth it! 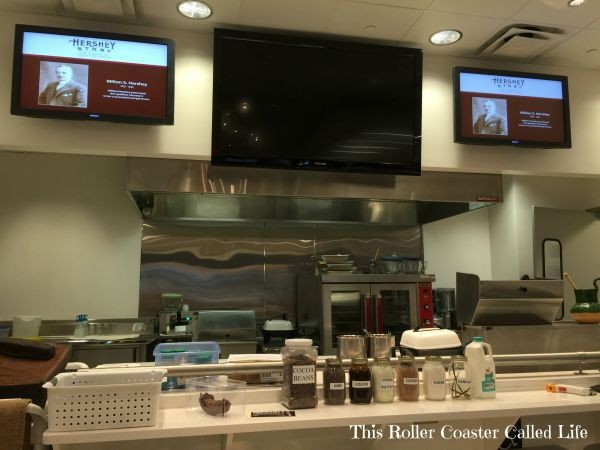 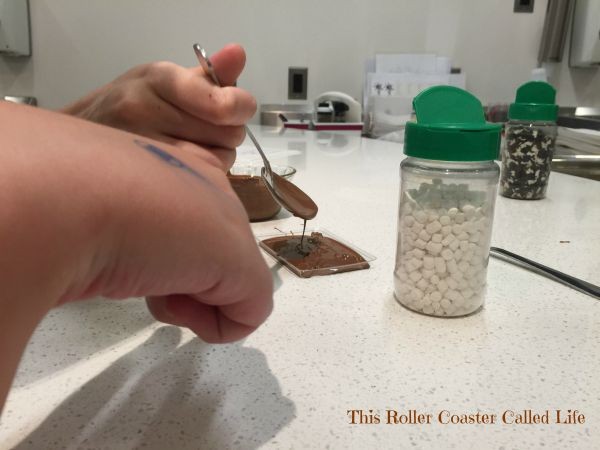 We started by making our individual chocolate bars, so they could chill in the refrigerator while we learned.  We spooned the warm chocolate into the molds and added toppings like small marshmallows, vanilla chips, and crisped rice.  The best part of making the chocolate bar was licking the spoon afterwards!

So, what did we learn after making our chocolate bar?  The lady in charge of the Chocolate Lab that day was so knowledgeable!  She started talking about the process of making chocolate from how many cocoa bean pods are on each tree to how many beans it takes to make the chocolate bars.  The numbers are staggering!  I never knew that the beans inside the pod were covered with an edible pulp that tastes like citrus.  The lady said that when she was training for her job, they cut open a fresh pod.  She said the pulp tasted like mango.  It’s amazing that something like that can be changed to taste like chocolate.  The left picture above shows a fresh pod cut open.  The photo on the right is a desiccated cocoa bean pod.  I didn’t realize they were so large! 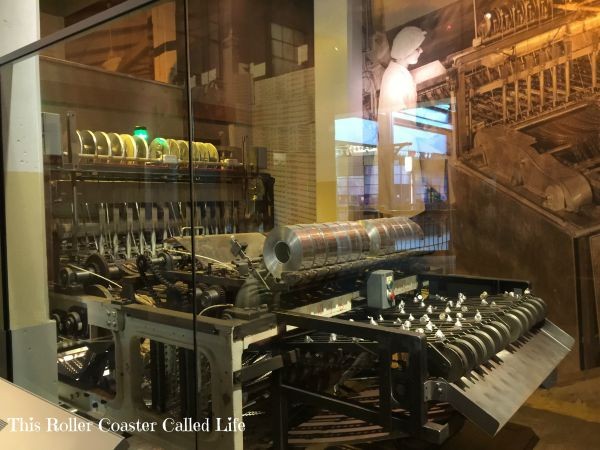 After the Chocolate Lab, we headed upstairs to the main part of the museum.  There is so much information up there!  I wish I could go by myself and take the time to read each and everything.  Maybe someday…  Anyway, this is the Hershey Kiss wrapping machine.  From the information on the wall, it looks like wrapping the Kisses became mechanized in 1921.  Isn’t that amazing?  Anyway, there was a break in wrapping Kisses from 1942-1949 because aluminum was rationed due to the war.  During this time, Hershey made over 1.6 billion ration bars for the US troops! 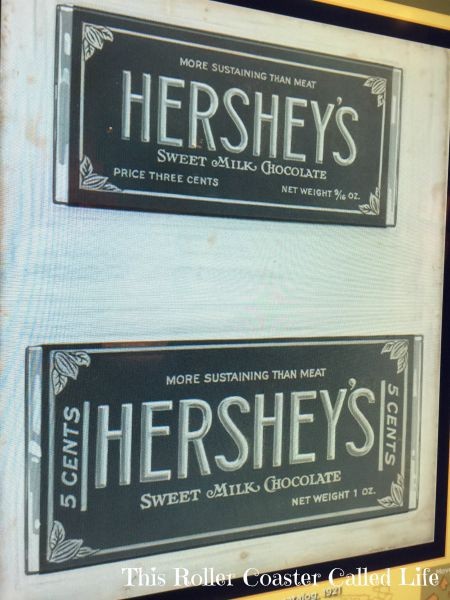 After reading about the ration bars, I stumbled upon this old packaging for the Hershey bar.  Remember that word from above?  “Meat”?  Look what it says on this wrapper:  “More Sustaining Than Meat”.  Yep!  Give me chocolate any day! 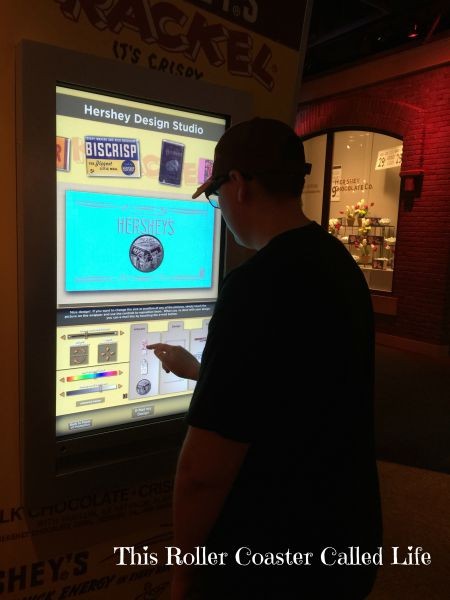 There really is a lot to look at here.  There were two or three interactive displays about designing wrappers.  Then, we were even able to email our design to ourselves. 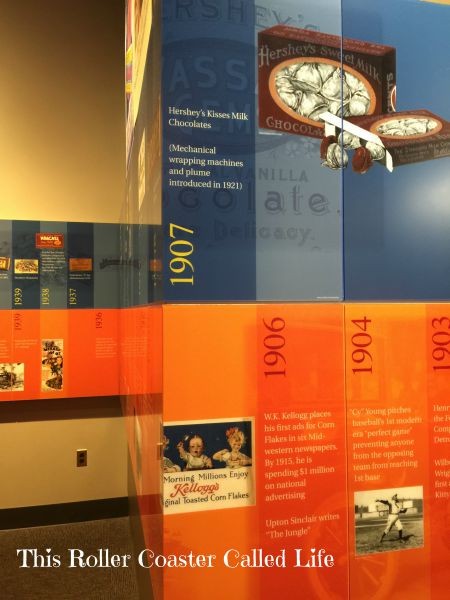 There is a whole wall that has important dates both in Hershey history and non-Hershey history.  One of my favorites is 1963 when the Hershey company purchased the Reese’s cup from the HB Reese company.  That itself is an interesting story.  Did you know that HB Reese worked for Hershey?  Then, he built his own factory right up the street.  In fact, it stood very close to where The Hershey Story is.  Now, what would happen nowadays if someone wanted to start a competing business to his boss’?  At the very least, he would probably have to go so many miles away before building.  BUT things were different in Hershey as I’ll highlight in a little bit. 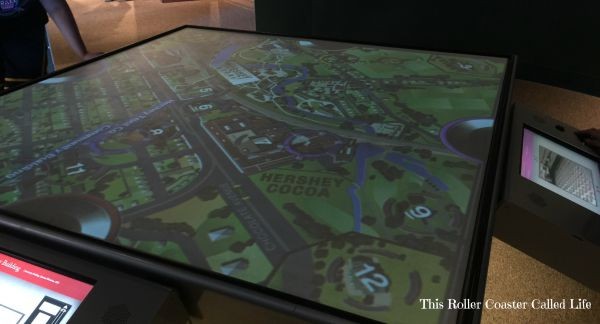 One of the really cool multimedia experiences is this table.  There are four stations, and each station has its own colored target.  We took our target around town to find out more about other locations in town.  Songbird found some really great information about Reese’s, including a video of Reese’s being wrapped.  I found out some about The Hotel Hershey, including some old photos.  There is a LOT of information in this little table. 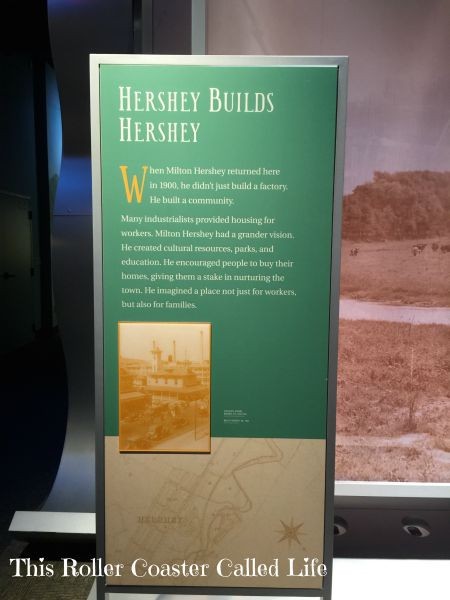 Now, I want to discuss what makes Hershey different.  When Milton S. Hershey moved to Hershey, he did so because of access to the railroad line and the dairies.  See, it’s all about the milk.  While other chocolatiers used powdered milk, Milton Hershey wanted to use fresh milk.  It helped to be close to the cows!

That’s not the only way he was different.  Milton S. Hershey cared.  When you look at other communities that were created around industry, like the town Pullman built and Eckley Miner’s Village, the towns were for the industry not the people.  See, in Eckley and Pullman’s town, home ownership was not allowed.  Rents were higher than wages could sustain, and even when wages were lowered, rent went up. It really was more like slave labor.  Hershey was different.  He wanted his staff to succeed!  He encouraged home ownership.  He set aside land for a park.  He built an opulent theater, so the townsfolk wouldn’t have to go to New York City to see shows.  The Hershey Theatre is still in use today, and it is stunning!  He built what is now ZooAmerica for his employees. 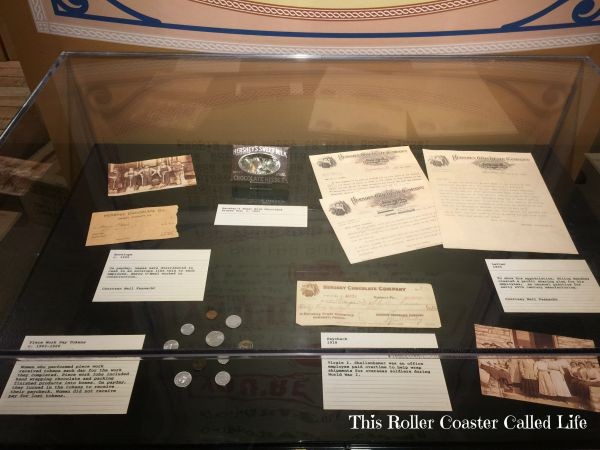 And he did something that was unheard of at that time.  He initiated a profit-sharing of sorts in the early 1900.  He encouraged home ownership!  He took care of his employees, and his employees took care of his company.  Milton Hershey and his wife were unable to have children; however, they wanted to help children.  They opened the Hershey School for Boys and took in orphan boys.  The school is still in operation today and takes in girls and boys with financial need.  These children live in town in houses with houseparents, I’m told.  Their education and clothing are taken care of by the Hershey trust.  Hershey cared for his employees and people in general, and it shows in the current employees, too.  When we go to Hersheypark, The Hershey Story, or really any Hershey organization in town, we can tell the difference.  The employees love what they do, and they love sharing Milton Hershey with visitors. 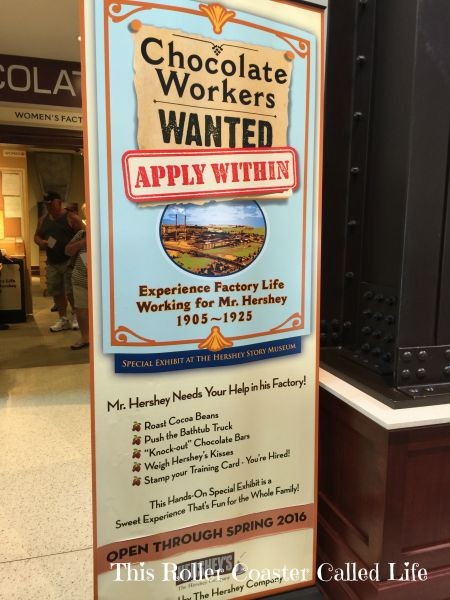 I have just a few more pictures to show you.  This is an exhibit that is only going to be here through Spring 2016.  It is a hands-on example of what working for Hershey entailed back in the early 1900s. 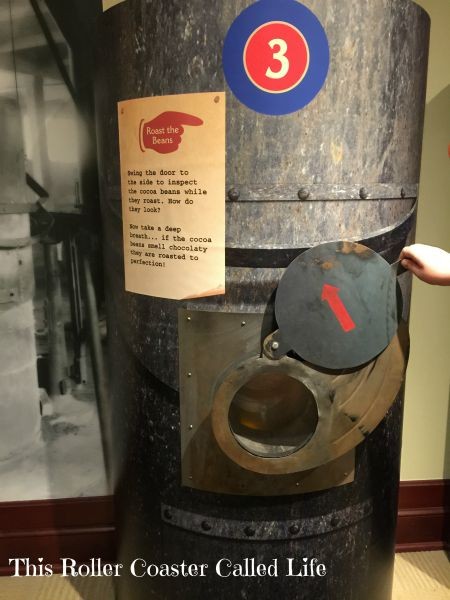 The smell coming out of this roaster is just amazing; however, the job of a roaster was long and hot.  it was one of the higher paid jobs as the roaster needed to know when the cocoa beans were ready.  It paid 15 cents per hour. 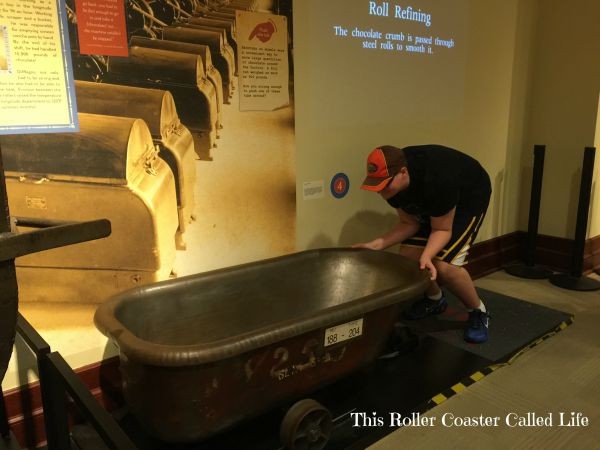 How would you like to move the chocolate by pushing it in a tub like this?  They say the tubs weighed 900 lbs. 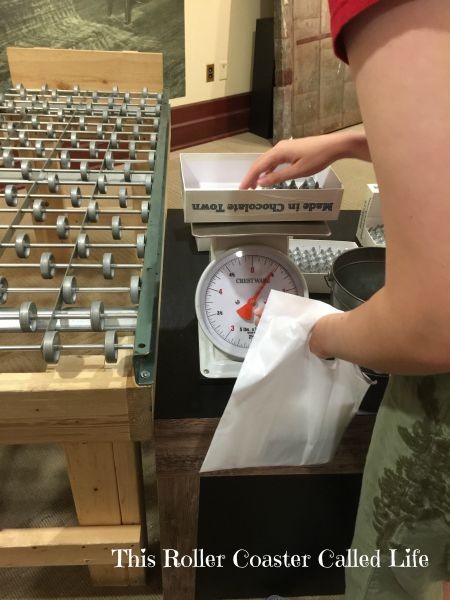 This part of the museum reminds me of the episode of I Love Lucy where Lucy and Ethyl were wrapping candy in the candy factory.  I guess I’m not the only one as the person working in this area mentioned that she has had several people ask about that.  But, I think of all the things that were done manually then but is automated today.  Like weighing and packaging up the candy.  It is amazing that Hershey was able to make so much out of cocoa beans, sugar, and milk!

You may be wondering what is left in The Hershey Story to see that I haven’t posted.  Actually, there are quite a few things!  It is definitely worth a stop if you are in the area!

For more information on museums to visit with your family,
check out the other great posts from the Blogorail!

Here is the map of our Blogorail Peach | Family Adventure : Museums