Hersheypark has added its 13th roller coaster to the park, and it opens for the Memorial Day Weekend!  Last night, we attended an exclusive media preview for Laff Trakk, and we had such a great time!  We LOVE roller coasters and were eager to try this one out.  Laff Trakk at Hersheypark is the first indoor, spinning, glow-coaster in the United States, so we knew this would be a unique experience.

The outside of the building really gives a great idea of what you will find inside!  Laff Trakk takes the old-fashioned fun houses of many years ago and makes it into a 21st century fun house.  The glowing fun house characters merge well with the coaster that has a spinning car.  Each ride is a little different because the car spins as it moves around the track.  The kids and I experimented over eight rides and found that it was a little different each time depending on how many were in the car and where we were sitting.

Back to the preview…  We were entertained by the Hershey characters and the Laff Trakkers!  This one-man band was VERY talented!  Just ask Marvel Boy as this gentleman did a song from the Cantina Band on his kazoo by request.  Marvel Boy was impressed!

At first, we wondered if Hershey Bar was going to make the announcements…  He didn’t, but Hershey melted Songbird’s heart when he kissed her hand. 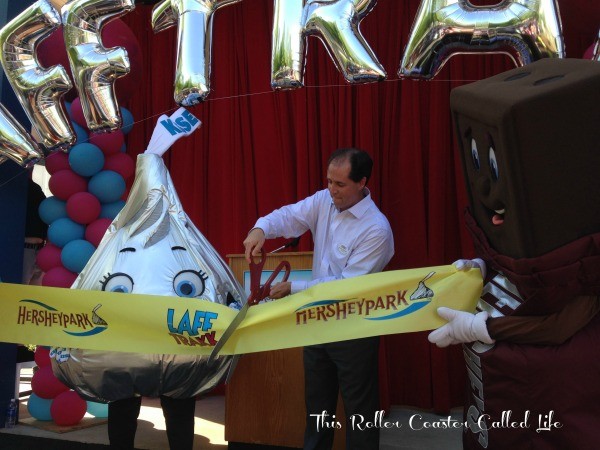 After the announcements, Kevin Stumpf (General Manager, Hershey Entertainment Complex) cut the ribbon.  Then, we were off to ride!

Once you get to the indoor portion of the queue, both walls are lined with fun house mirrors.  Do you remember playing with these as a kid?  This is a great way to keep the kids occupied while waiting for your turn on Laff Trakk!  (NOTE:  If your child is sensitive to loud sounds, you might want to bring the headphones with.  Those of you who have kids with sensory processing difficulties will understand what I mean.  I’m not sure if it was because the room wasn’t full, but the music did seem loud.  Marvel Boy wore his headphones while waiting in the queue.)

Yes, even the adults seemed to be having fun with the mirrors!  I figure this is the only way I will get those long legs I wish I had…  (I am now officially the shortest one in the family.  Even my 12 year old is taller.) 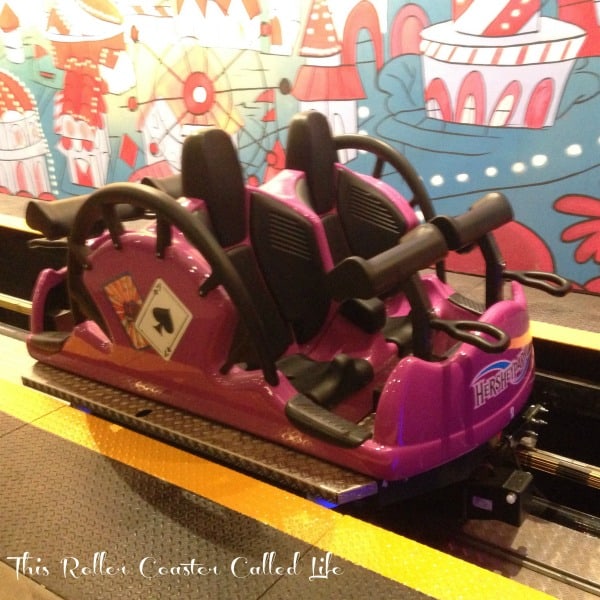 Let’s talk about the ride vehicle…  There are four people in each car.  Two-by-two and back-to-back.  I found the ride vehicles to be a little tight.  I am on the larger side, so I was glad to see there is a test vehicle out front to make sure of the fit.  I was able to ride, but each time, the ride operator needed to finish clicking me in.

We were not allowed to take photos or videos on the ride, and I can see why.  While it isn’t quite as dark as I thought it would be, the variable nature of the spinning of the ride vehicle would make it difficult to hold onto a camera.  Having said that, Hershey provided me with photos, so I could show you what the inside of the ride looks like.  Doesn’t that look like fun?  As I said earlier, the kids and I rode Laff Trakk eight times.  We probably would have gone a few more times, but it was time to leave.  It is definitely a FUN ride!

It is called a Spinning Coaster 2000 and was manufactured by Maurer Sohne.  It is the first indoor, spinning, glow-coaster in the United States.  The maximum height is 50 feet and has the following elements:

The maximum speed is approximately 40 mph.  There are 7 trains with 4 riders per train.  The length of the ride is approximately 70 seconds.  Minimum height requirement is 42 inches or the Reese’s height designation.

Check out this video!

Doesn’t that look cool?!  Marvel Boy is already planning a day trip for shortly after Laff Trakk is officially open!

Now, a few notes for those on the Autism Spectrum.  As I mentioned before, the queue is loud, but it is also fun.  This is a dark ride with some elements that may be considered a little scary for some with sensory processing issues.  Marvel Boy did not like riding backward as the character cutout is a little more scary than what is shown if you are going forward.  Hersheypark gives Laff Trakk a “5” ride rating for “Aggressive Thrill Ride”.  It is high-speed, but we felt it was much more smooth than several of the other “5’s”.  Usually, Songbird doesn’t ride a “5” due to some health concerns; however, this ride suited her well because it was so smooth and didn’t contain any loops.

I’m glad we bought season passes for the year because I’m sure we will find ourselves down in Hersheypark several times before the holiday season!