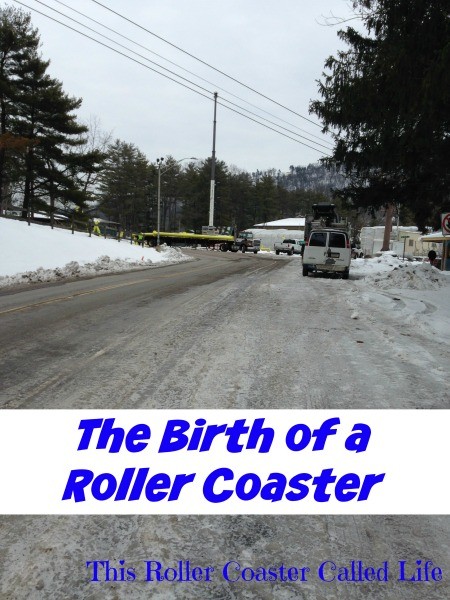 Knoebels Impulse – The Birth of a Roller Coaster

I had heard that Knoebels was going to put up a new roller coaster before opening for the 2015 season, but I didn’t really think too much about it until I read that the first support was up.  Then, the kids and I hopped in the new vehicle (I needed to test it out on some snow, right?) and headed over to see what we might be able to see. 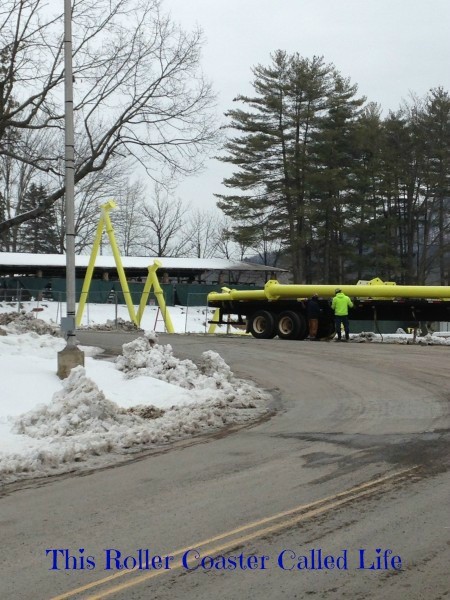 We were thrilled to see that we could actually view what was going on.  Those who go to Disney Parks know that new things being built or reimagined tend to be put behind barriers.  Then, we can’t see what changes are going on.  Not Knoebels.  It seemed like we might be in for a winter of discovery!

Before showing more of the process, I want to thank the Knoebel family for a winter that we will never forget!  You might be wondering why I would say that…  I mean, the park is closed, right?  But how many opportunities do you have to see a roller coaster be built from the ground up with large pieces of track and support laid out in the parking lot for all to see?  This winter has given us the chance to see things “behind the scenes”, and it has triggered several conversations regarding science and design.  Thank you so much for such a great opportunity, Mr. Knoebel! 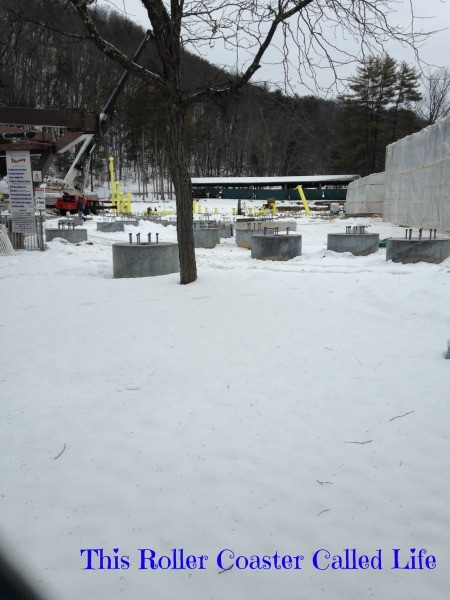 Onward and forward…  When we first started following the process, it was easy to see the footings but difficult to really get a vision of what was to come.  We did find the board with the artist rendering of the roller coaster, but sometimes, it’s difficult to see 2D as 3D. 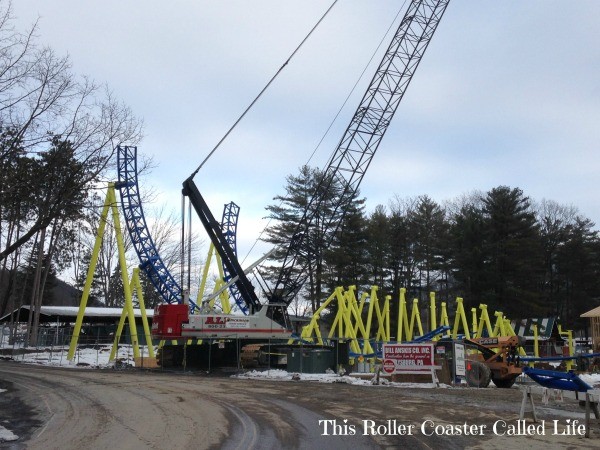 It became a little easier to visualize as the track started appearing on the supports. 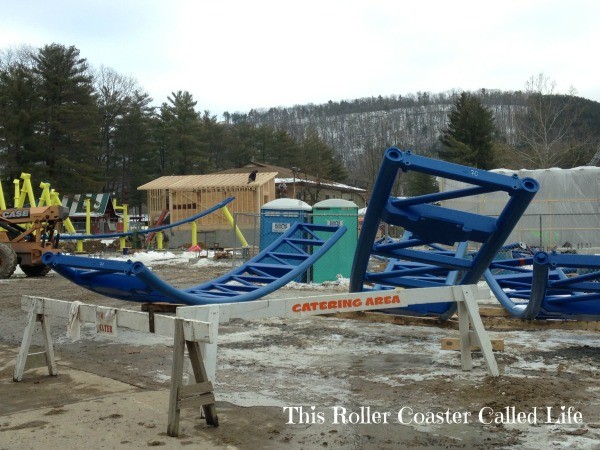 I’ve ridden many roller coasters in my lifetime, but I guess I never really realized exactly how big each section is.  It was truly eye-opening to see the pieces closer! 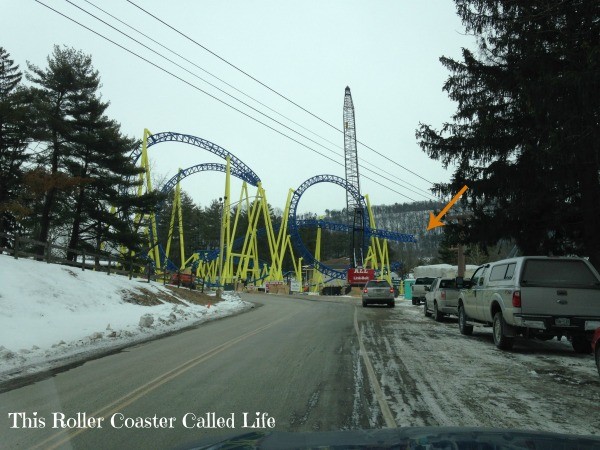 Soon, we could see even more definition as we drove up.  See the orange arrow? 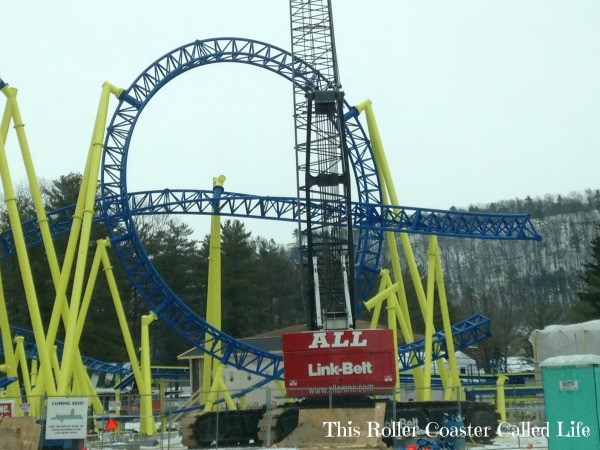 Here’s a closer view of where that orange arrow was pointing.  While I jokingly made comments about the loop that had a sudden stop, I am very impressed that these pieces of track really seem straight even though they are just hanging out there. 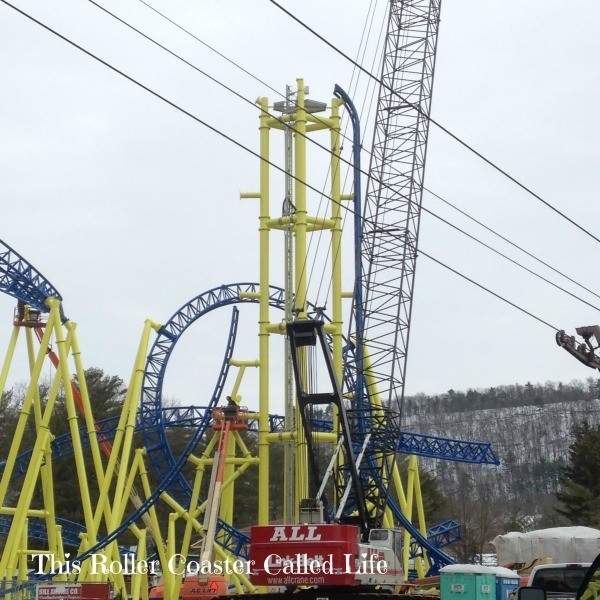 See how the track almost goes up to the top?  I’m very impressed with how quickly this roller coaster went up!  While it seems like it was overnight, the first picture I took above was taken on February 4, 2015, and the last picture was taken on March 24, 2015.  Wow! 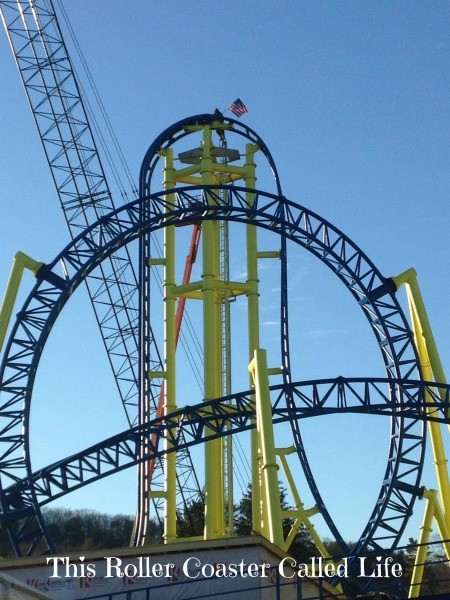 Just a day or two later, and it was topped off.  I LOVE this picture of the flag on top! 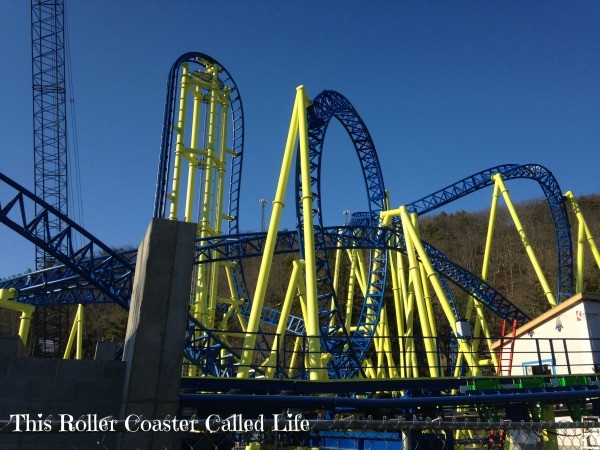 At this point, the track was just about done.  There are so many twists and turns in such a small footprint!  This coaster is sure to thrill riders! 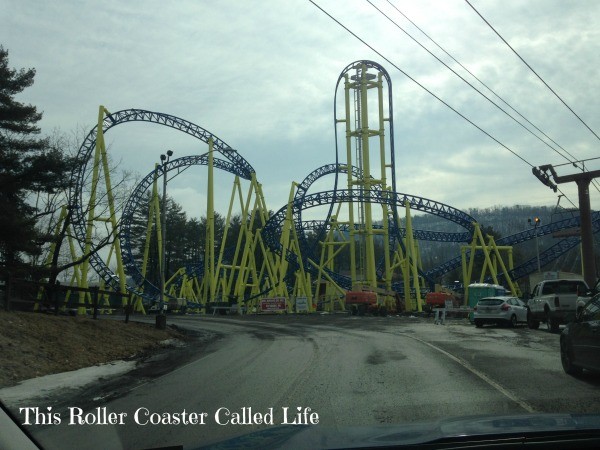 Then, once it was topped off, the really big crane wasn’t needed any more, and away it went.  That seemed like quite the undertaking as I saw several trailers down the road with what appeared to be crane parts on them. 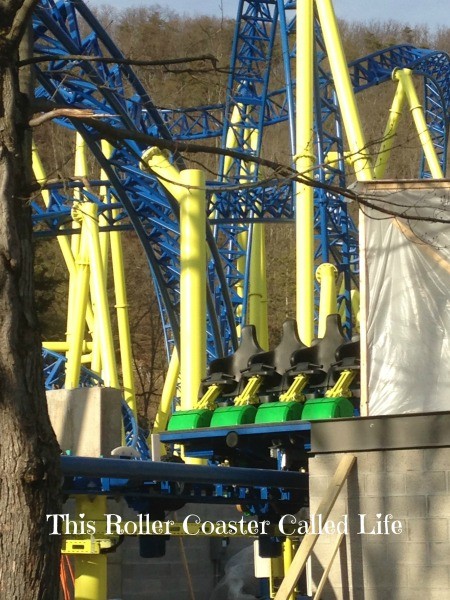 Now that the roller coaster appeared to be completed (other than the ride queue building), we eagerly awaited the chance to see the cars, especially on the track.  Yesterday, we got our wish.  There was a car. It was on the track and moving forward and backward as they did checks.  We hoped to see it fly along the track, but it wasn’t to be that night. 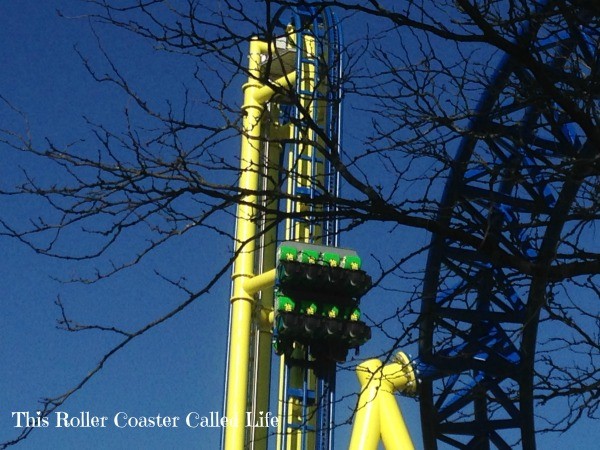 But…  Today was a different story!  Look what we saw running today!  It was so cool to see, especially because we have never seen a roller coaster go from the ground up before our eyes. 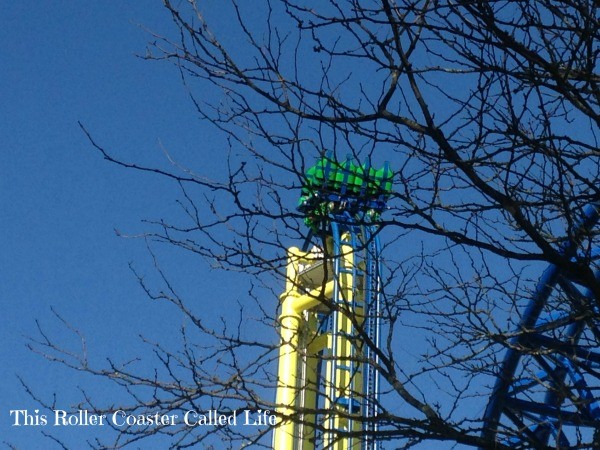 Can you imagine that view from the top?  It must be absolutely amazing!  That is, if your eyes are still open at that point.  😉  Talk about anticipation… 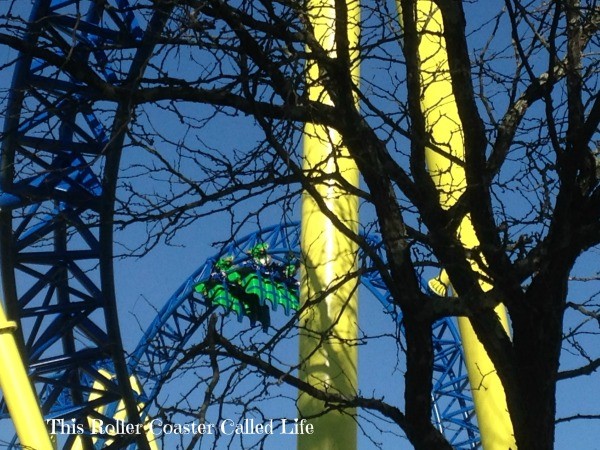 Now, I didn’t exactly have the greatest vantage point, nor did I take my good camera.  Despite that, I’m tickled to catch the car at the top of the loop!  Luck shot, right? 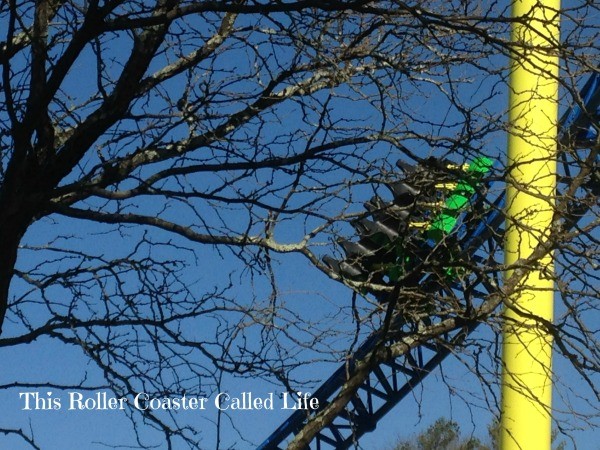 Who’s ready to ride the Impulse at Knoebels this summer?  You can read more about the Impulse on the Knoebels website.  Knoebels opening day is listed as April 25, 2015.

Want to see more?  Check out my video below of an Impulse test run!