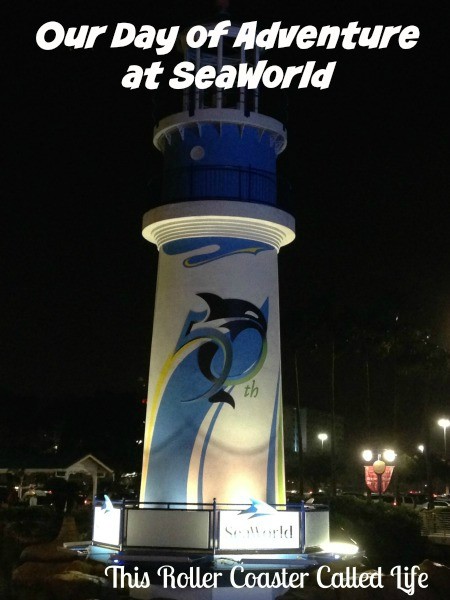 Our Day at SeaWorld Orlando

For our last day in the Orlando area, we headed over to SeaWorld.  It had been a LONG time; since, I had been to SeaWorld Orlando, and the rest of the family hadn’t been before.  As you can tell, our vacation had a marine animal theme to it, so a stop at SeaWorld was a must!

Our plan was to see most of the Christmas decorations and programs, but as you will see, Marvel Boy had other thoughts on his mind.  When you travel with a child on the Autism Spectrum, things don’t always go as planned.  I’ll discuss some of the Christmas offerings a little later, but first I want to show you what was on Marvel Boy’s mind.

When we first arrived at SeaWorld, we were given the choice of paying for regular parking or paying for a preferred lot.  I am here to tell you that the little bit extra for the preferred lot was worth every penny when it came to leaving at park closing!  After parking and getting through the gates, we headed to guest services to see what accommodations were available for Marvel Boy.  The person at guest services was very patient as she explained their program.  We were given a piece of paper that had Marvel Boy’s information on it, as well as which rides offered accommodations.  If the regular line wasn’t too long when we got to a ride, we would be put in the Quick Queue.  If the line was longer, we would be given a time to come back later.  It wasn’t crowded the day we went, so we were never sent away with a return time but rather let right in the shorter queue.  You can read about SeaWorld’s accessibility here. 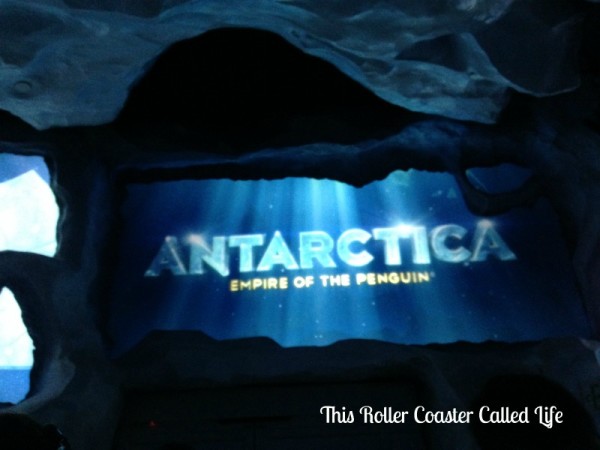 Really, there was only one ride that Marvel Boy wanted to go on multiple times:  Antarctica Empire of the Penguin.  I truly think he could have stayed in this one place the entire time we were at SeaWorld!  He loved the ride out to see the penguins, and then he loved seeing the penguins, too.  We were on one of the last rides of the day when an employee told us that sometimes the penguins try to jump out at the end of the day.  There we were cheering the penguins on.  Unfortunately, none of them made it out while we were there. 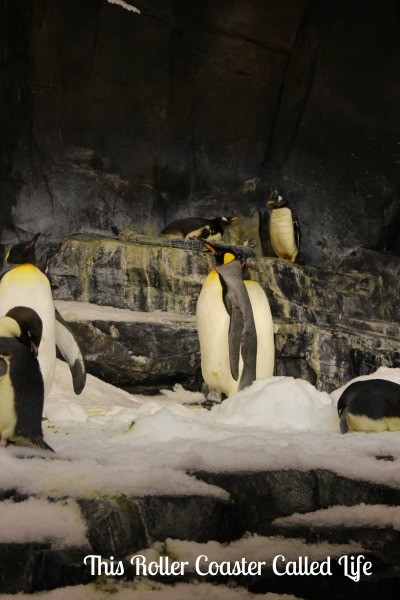 It was so neat to see the penguins up close.  It was an experience that we have never seen before.  It was cool to see them swim right in front of us. 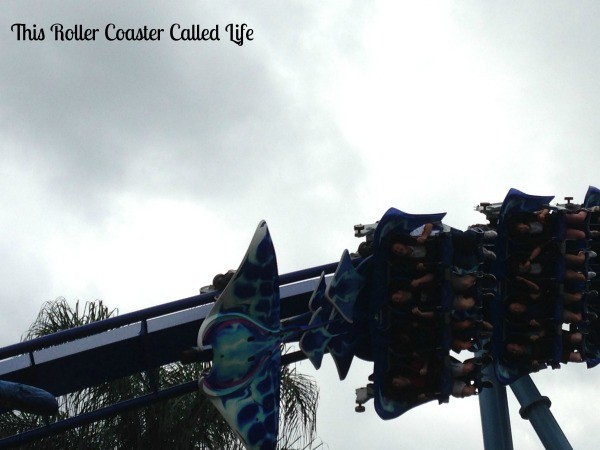 At one point, Don said he might like to ride the Manta.  Since he doesn’t get a chance to ride roller coasters that often, the kids and I went off to do something else while he waited in line for the Manta.  It was cooler that day and cloudy, so the line wasn’t very long.  I’m glad he got a chance to ride it but was thankful to keep my feet on the ground. 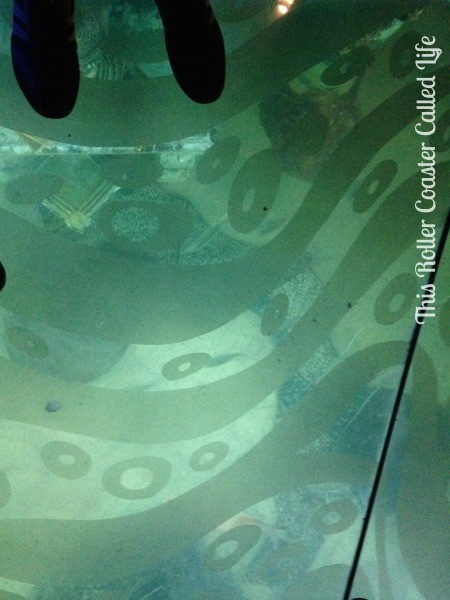 Another cool experience was to walk on a “glass” floor and see rays swimming underneath. 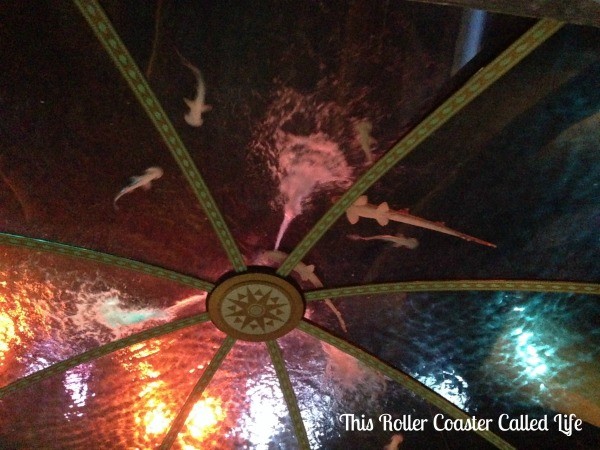 We also enjoyed watching sharks swim above our head at another area in the park.  There was also a place to walk through a tunnel of water with sharks swimming all around us.  Lots of great educational fun! 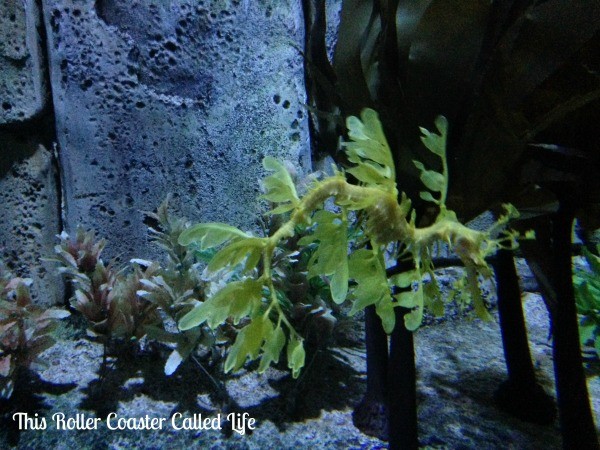 I just had to include a photo of one of these guys.  This is a leafy seadragon.  I had never heard of or seen one of these, but it sure was neat to watch. 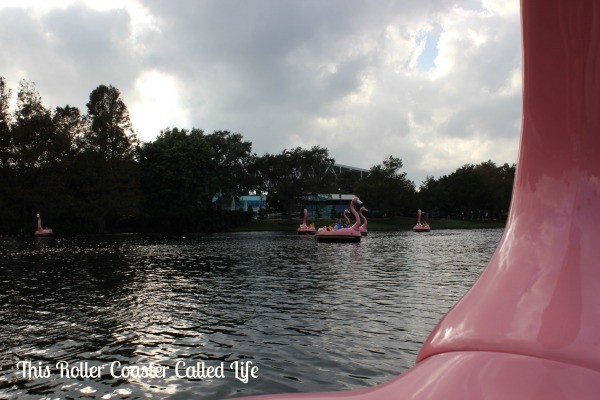 Another one of the cool things that Marvel Boy AND Songbird enjoyed was a trip out in the flamingo paddle boats.  This was an additional charge, but it was worth it for a short time.  I don’t know how much is open when the Christmas trees aren’t out in the water, but the area open at this time was rather small. However, it was a unique adventure. 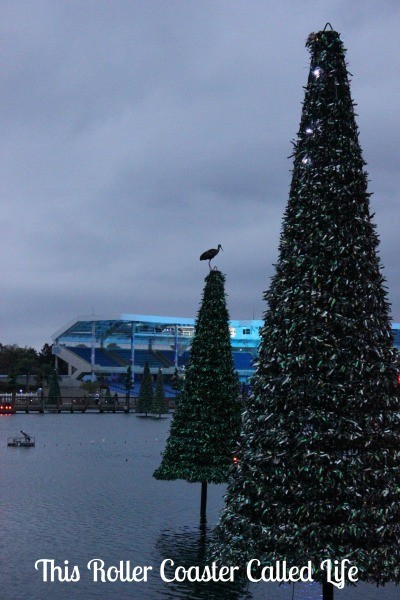 So, let’s talk about what they had for Christmas.  I really wish we had been able to see more of the Christmas activities, but Marvel Boy wanted to stay with the penguins and other marine animals.  While we were having a little bit for supper, Songbird asked why there were no stars on the trees.  I really didn’t know, but I have my suspicions.  So, it was timely that this bird decided to sit on the top of this tree, and that became the reason there were no stars on the trees. 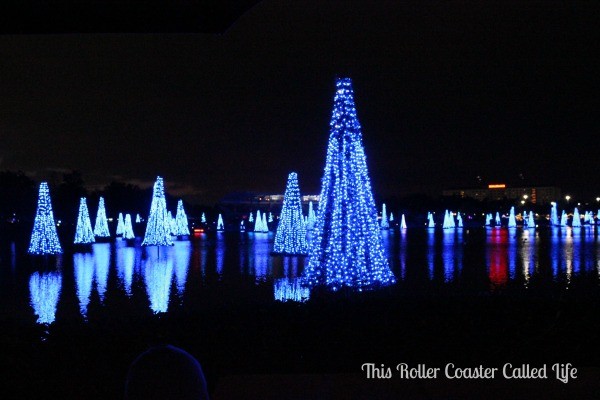 After dark, the show began.  The lighted trees were beautiful and the lights moved and changed with the music.  It was starting to get cooler, and we had just brought our rain jackets.  So, we decided that it was time to get moving and look at other decorations. 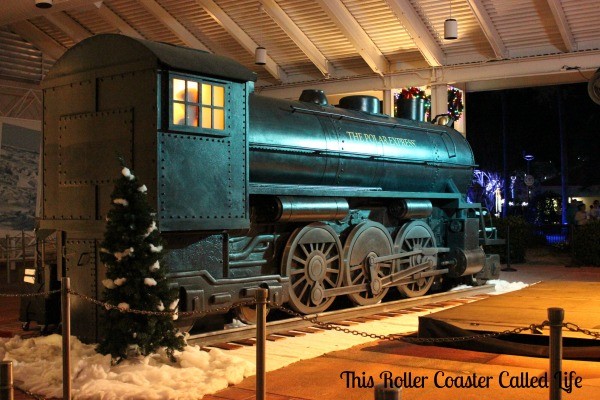 One of the Christmas things that Marvel Boy did want to do was the Polar Express Experience.  The line appeared a little long; however, it didn’t take too long to board.  This is a motion-simulator ride, and if you have problems with motion, you might want to skip the riding part.  I think I heard someone say that there was an alternative view area, but I sucked it up and made it through the ride.  The kids LOVED it, and Santa was available after exiting the ride. 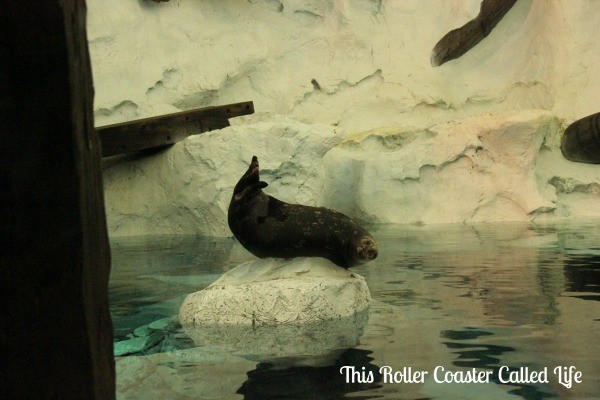 There were a few other animals to see after exiting the Polar Express Experience.  Since it was so late and many people had already left, we had a great time just standing and watching the animals.  This guy was doing some acrobatics on his little rock island. 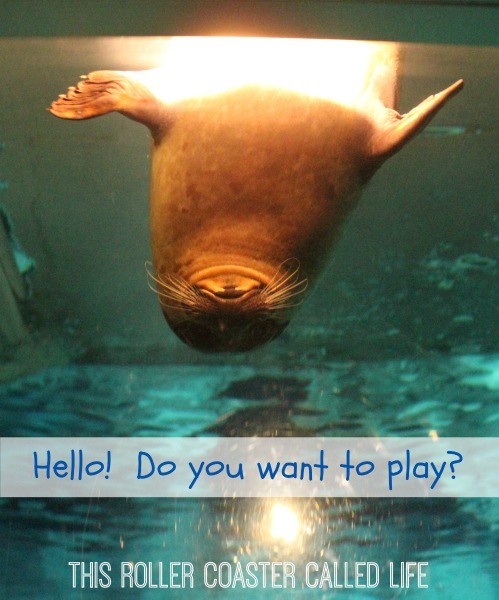 This was the guy who stole the day!  He would duck down like this and stare Marvel Boy in the face, and then, he would swim around the pool and come back again.  We must have been in that one spot for about 30 minutes just playing “peek-a-boo” with this cute fellow.

SeaWorld had special Christmas shows and lights galore in addition to the Polar Express Experience.  I wish we had been able to experience a few more of the holiday offerings, but regardless, we had a wonderful day at SeaWorld and can’t wait to go back again!

If you are looking for something to do in Orlando this Spring Break, Summer Vacation, or even next Christmas, make sure to check out SeaWorld!  SeaWorld’s 50th Celebration lasts through September 7 this year, and they also have some other great events going on.  Make sure to check out their events page!