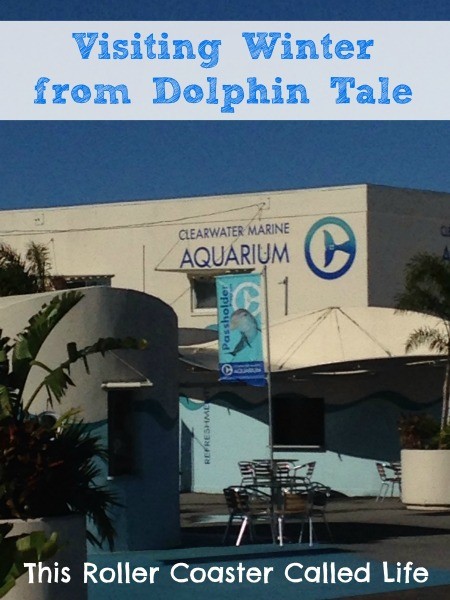 In continuing on with our vacation memories, I HAVE to talk about the MOST important part of our vacation.  At least, as far as Marvel Boy is concerned.  He still talks about it constantly, but I guess I should start at the beginning…

I had heard about Winter, the dolphin without a tail.  She lives in Clearwater Marine Aquarium, and her experience is depicted in the two Dolphin Tale movies.  Winter seems to “talk” to people with her adaptability.  We were looking for a more laid-back beginning to our vacation, so I thought Clearwater would be a perfect side trip. 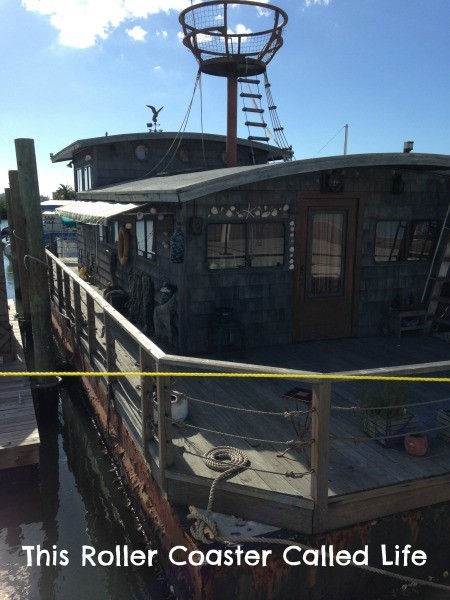 We got up and had a leisurely breakfast before heading from Kissimmee to Clearwater for the day.  As we pulled up to the aquarium, we saw several props from the Dolphin Tale movies.  One of these props is the houseboat moored next to the aquarium.  We parked the car and headed in to get our tickets. 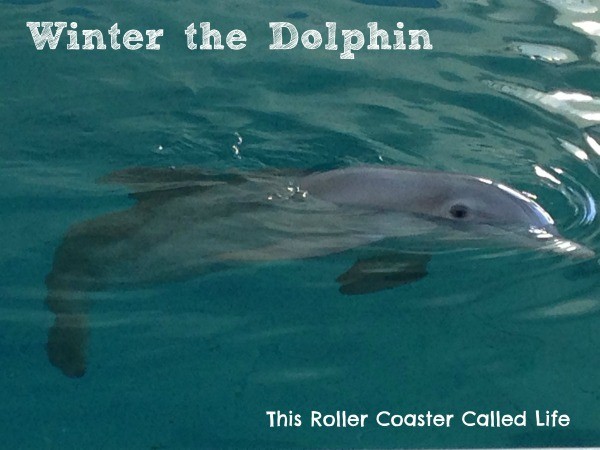 Nothing could have prepared us for seeing Winter in real life.  I mean, we had seen Winter on webcam, but it is not the same as being able to see this dolphin up close, swimming without a tail.  When Marvel Boy saw Winter up close, he became an instant fan/friend. 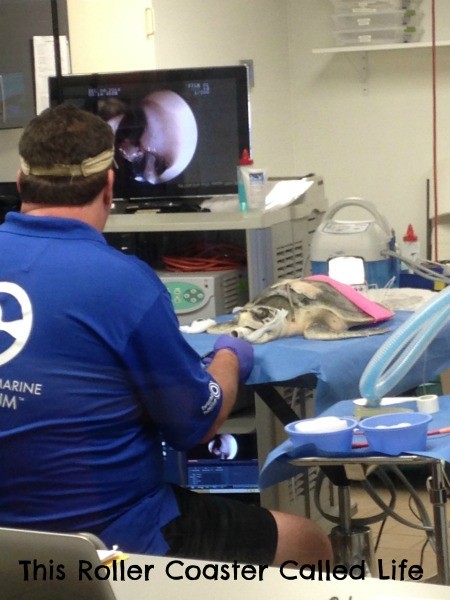 There were so many other things to see at the Clearwater Marine Aquarium, like watching this turtle have a procedure performed or touching stingrays. 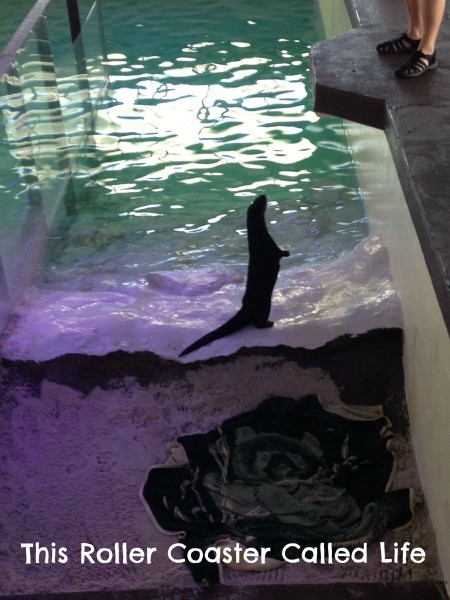 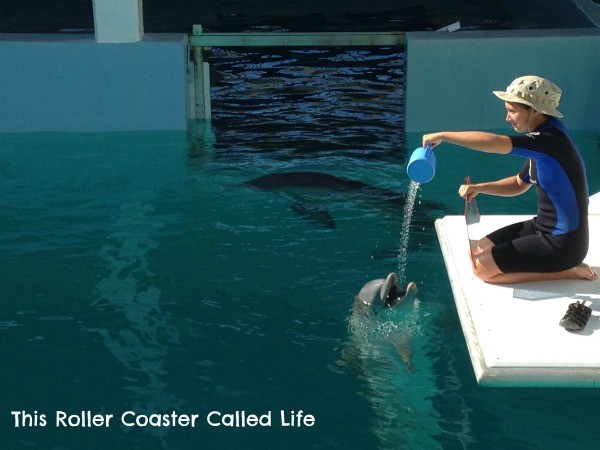 However, Marvel Boy just wanted to watch Hope and Winter swim in the pools.  He really built a connection with Winter and talks about her daily.  He watches both Dolphin Tale movies weekly, as well as watching the DVD about Winter’s story that we bought at the aquarium.  If Marvel Boy has the iPad, he may very likely be watching Winter on the webcam. 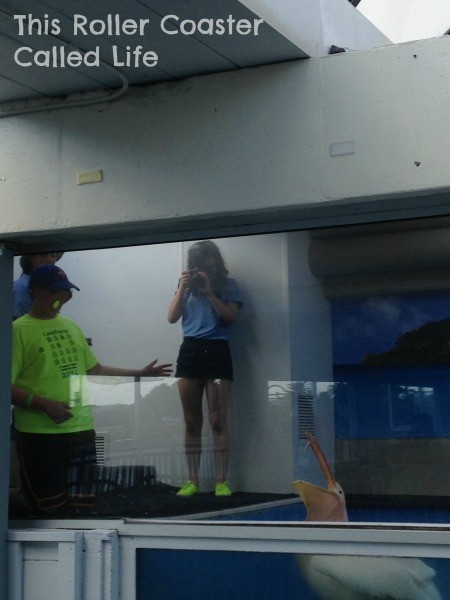 One thing that he did do that didn’t involve watching Winter was to feed “Rufus”.  “Rufus” is the pelican in the Dolphin Tale movies, and he was actually played by two pelicans named Lucy and Ricky.  Marvel Boy wanted to feed “Rufus”, and while it took Marvel Boy out of his comfort zone, he was up for the task.  It was great to see him do something that far out of his norm without his getting frustrated! 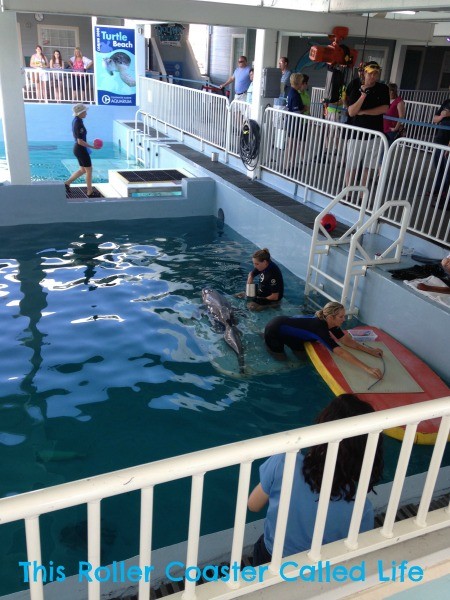 But back to the dolphins…  Winter gets what amounts to physical therapy in human terms.  We watched as they collected a urine specimen from Winter, and we also saw Winter being measured extensively.  We were told that this was a daily thing to keep track of her spine.  After that, they did some stretching of her spine before putting her prosthetic tail on her.  It was something to see Winter lie there peacefully during this process. 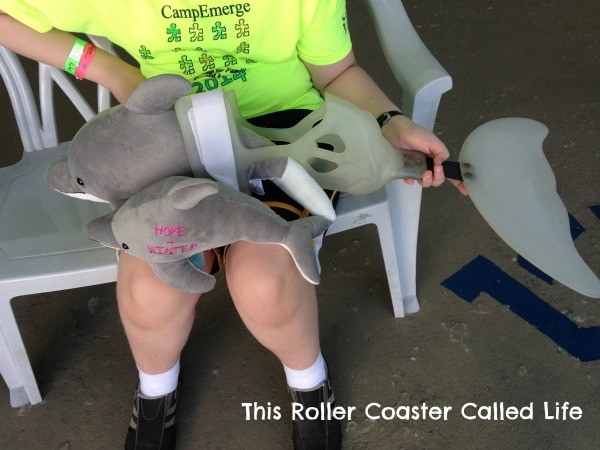 We loved all the staff and volunteers at the aquarium!  Not only were the staff helpful, but there were volunteers who wandered around answering questions and giving short talks about what was going on with Winter or the other animals at the aquarium.  One of the volunteers brought around one of Winter’s prosthetic tails to let us see and touch it.  As you can see, Marvel Boy had to put his own plush Winter in the tail to see if it fit.  One of the other things a volunteer brought around was the cover that goes over Winter’s stump before putting on the tail.  In the movie, they called it Winter’s gel.  I can see why Winter is able to wear it…  It was so soft!  In fact, Marvel Boy could have touched and squeezed it for a LONG time!

There is another part to the Clearwater Marine Aquarium.  It is a museum that holds a lot of the props and tells the story of the Dolphin Tale movies.  It is in downtown Clearwater, and the aquarium provides a bus and boat for transportation to the museum.  We took the bus there and rode the boat back.  While at the museum, we were able to see props up close and even experience a Cat 1 hurricane.  Yeah, Marvel Boy didn’t like it so much, but Songbird and I enjoyed going through the hurricane. 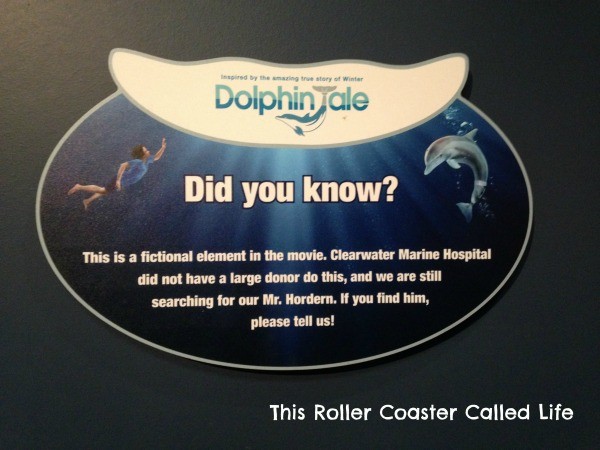 So, in watching the Dolphin Tale movies, I tend to look at them as “true life”; however, there was quite a bit of “poetic license”? taken.  One of the things I saw in the movie that I had no idea was fictional was the donor.  Do you remember the donor who bought the aquarium to build a hotel but ended up funding the aquarium?  Well, that’s not true.  Clearwater Marine Aquarium does not have a rich benefactor.  They are currently raising money to build a new facility.  If you want to donate, you can at https://donate.cmaquarium.org/page/contribute/give-to-cma-today.  You can also support Clearwater Marine Aquarium by visiting them and even experiencing some of their animal encounters.

So, Marvel Boy has a dream of being Winter’s Assistant Trainer for a day and/or swimming with Winter.  With his being on the Autism Spectrum, he doesn’t really understand that his being able to accomplish that goal likely won’t happen.  He can always dream, though.  Anymore, his life seems to revolve around Winter, and I’m ok with that.  It is so much better than many other things that he could obsess about, and he is learning at the same time. 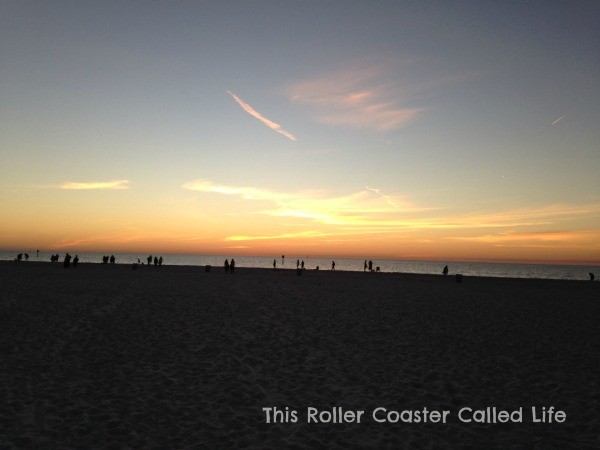 We ended our perfect day with a view of sunset on Clearwater Beach.  One of the aquarium staff recommenced we take a trip over there, and we made it just in time to see the beautiful colors as the sun went down.  The perfect end to the perfect day!