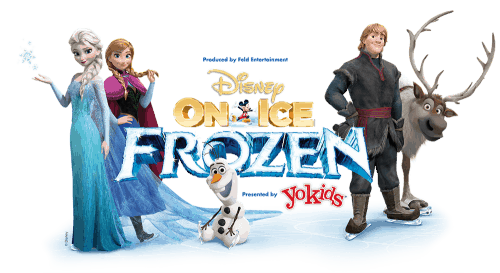 Did you read the title to the tune of “Do You Want to Build a Snowman?”  You did, didn’t you?  Disney’s movie Frozen has swept through the culture to become an instant classic movie!  We are all Frozen fans, and the soundtrack has even made it on more than one playlist, even DS11’s iPod playlist.  While we are driving, it is not uncommon to hear the kids both singing song from this movie.

We are Disney On Ice fans, too, and were excited when it was announced that Frozen would be coming to Disney On Ice.  This seems like such a great combination, and we can’t wait to see it!  In fact, I am happy to have been contacted by Feld Entertainment to share information about Disney On Ice presents Frozen with you in exchange for a chance for my kids to able to see this show!  In case you haven’t seen the sneak peek video, you can check it out below.


Doesn’t that look like it will be a great show? I can’t wait to see how they do Olaf and Sven! That wait won’t be too long because Disney On Ice presents Frozen is coming to the GIANT CENTER in Hershey, PA next month:  October 15-20.  We are all excited to get to go! 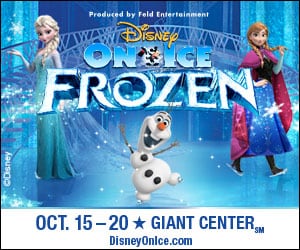 While the show is about Disney’s movie Frozen, you’ll still get a chance to see other Disney characters that are regulars in Disney On Ice shows.  Here’s the official synopsis:

In Disney On Ice presents Frozen Presented by YoKids, Mickey Mouse and Minnie Mouse take the audience through the magical story based in Arendelle, with special appearances by beloved Disney princesses and favorite characters from Disney/Pixar’s Toy Story and Finding Nemo and Disney’s The Lion King, who come together to prove that true love is the greatest power of all. Director Patty Vincent says, “Our goal is to showcase these heartwarming characters in a way that allows the audience to cheer and sing along throughout this emotional journey.”

Are you excited to see Disney On Ice presents Frozen, too?  If you’d like to purchase tickets to see this at the GIANT CENTER in Hershey, PA, you can do so here.

Ready to enter?  Please read the rules below and enter via the Rafflecopter widget below.

Rules:  Giveaway starts at 12:00 pm EDT on September 11, 2014 and ends at 11:59 pm EDT on September 25, 2014. Open to U.S. residents 18 years old and older.  No purchase is necessary to win. Void where prohibited. Odds of winning depend on the number of entries collected. The winner will be chosen by Random.org via Rafflecopter and will have 48 hours to respond after being contacted by email.  Please make sure to use a valid email address. Facebook, Twitter, Pinterest, and Google+ do not endorse this, nor sponsor this giveaway. Nor are Facebook, Twitter, Pinterest, or Google+ affiliated with this giveaway in any way.  This Roller Coaster Called Life is not responsible for prize fulfillment.  Additional rules here.

Disclosure: In exchange for this promotion, my family will be able to see Disney On Ice presents Frozen free of charge. I’m happy to get the chance to not only allow my kids to see this presentation but to also be able to give a set of tickets to someone else. I received no other compensation. All opinions are my own.