For years, we have navigated the journey of Autism by ourselves.  I can’t tell you the number of times we have been told not to test our son because the local providers weren’t always accurate or consistent in their diagnosis.  That quite often, they were way off base with their assessments, and we could be worse off with the wrong diagnosis than without one at all.  Isn’t that sad?  We were always able to get appointments for physical therapy and occupational therapy as needed, though. In December, I started working at a local hospital.  When I mentioned that we homeschool, a coworker asked another coworker to put me in touch with a local person who homeschools and also has a child on the Autism Spectrum.  I will say right here that getting in touch with her was a God-send!  She helped me get in touch with the people I needed to get the kids’ standardized testing and evaluations done.  I never knew that it would be so difficult to get these two things done, but I’m so thankful for her help! 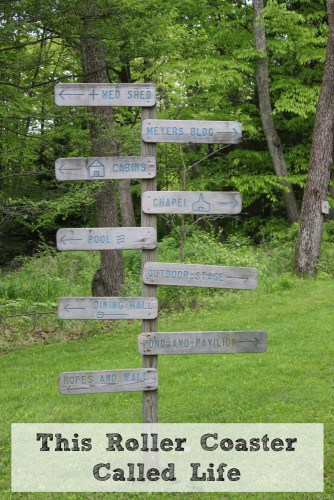 But back to the subject…  This person also told me about a family camp for those who have children on the Autism Spectrum. It’s a camp that allows the kids to be themselves without people’s stares.  It also allows the siblings who are not on the Spectrum to have the opportunity to do things they might not normally get to do.  The camp is called CampEmerge (This website is outdated, but they are working on a brand new one soon.), but it is held at Camp Victory.  Camp Victory is a special camp for special kids whose lives revolve around their illnesses or disabilities.  I encourage you to visit their website to see all the different kinds of kids their camp welcomes.  It is truly a special ministry!  CampEmerge uses the Camp Victory space to host families touched by Autism during three weekends throughout the summer. 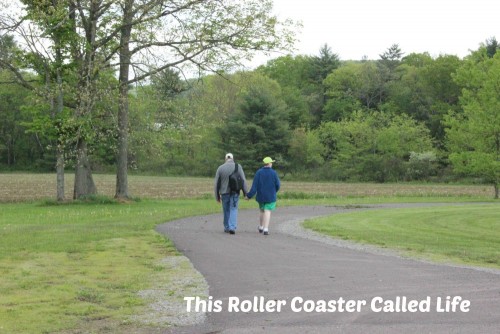 As you can see, Camp Victory is out in nature like most summer camps.  It is a sleep-over camp with several cabins.  There is a large building that houses the kitchen and dining hall where most of the meals were provided. 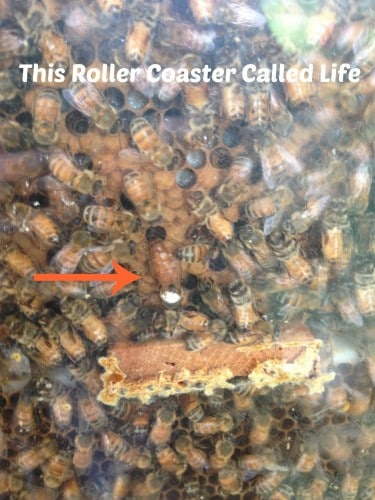 After we checked in for the weekend, we walked around camp to see what all there was to do.  We started at the nature center where we found this great bee hive display!  I’ve seen these before but not near as good as this one.  It was nice to see the queen so prominently marked, so we could see her laying eggs in the cells.  I know I could have stayed and watched it all day, but the kids had other things in mind… 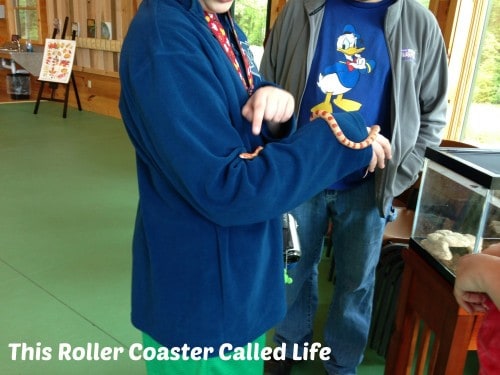 Yes, DS11 actually decided that he was ready to hold a snake.  As long as it was on his clothes and not his skin…  Baby steps…  There was also a turtle to see before we headed out to walk around further.  There was a small lake…  Ok, I’m from the Ozarks where the lakes go on for counties and across state lines.  This was a large pond, but there were paddle boats and fishing available for those who wanted to. 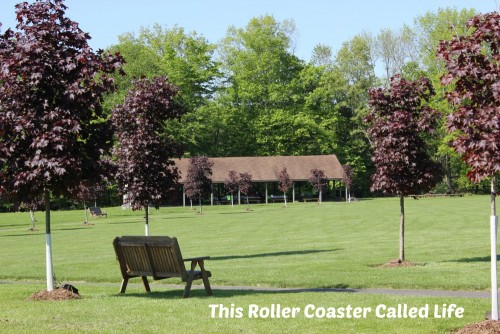 Doesn’t this look peaceful?  This is behind the dining hall and looking toward the craft pavilion. 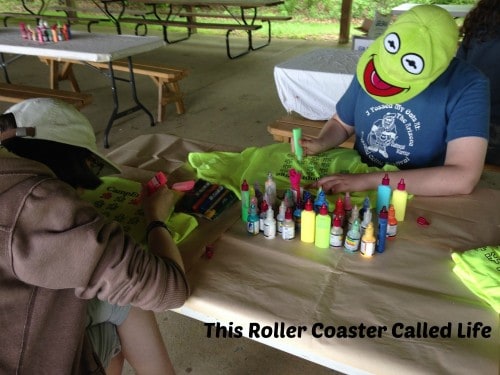 At the craft pavilion, the kids were able to decorate this year’s t-shirts with paint provided.  DS11 really likes his shirt and has taken to wearing it quite a bit.  In fact, if you’ve been with my blog for a while, you know we usually make matching shirts to wear on our Disney trips.  When we went to Hershey a couple of weeks ago, DS11 insisted that everyone wear their CampEmerge shirts to the park. 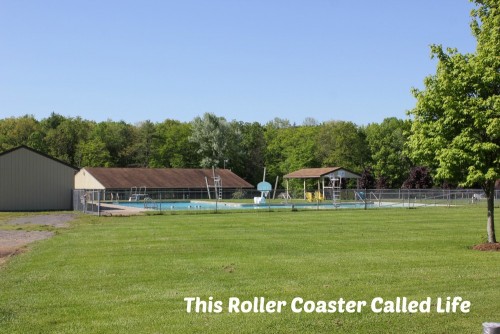 There is also a swimming pool.  We went over Memorial Day Weekend, so it was still a little on the cool side for swimming, but the kids jumped right in.  I was happy to sit back and watch them play.

As I mentioned, this is a sleep-over camp, but we live close enough that we could drive back and forth.  DS11 does better with his own bed, and we were concerned that the cabins (shared) might be a little warm and loud for him.  However, it appeared that there were people who came from multiple states and stayed right there throughout the weekend.  You may wonder why there aren’t any other kids in my pictures.  I asked permission to write about our experience, but I promised that I wouldn’t show others because I wouldn’t have their explicit permission to do so.  I don’t know how many people there were that weekend, but the dining hall was filled at every meal. 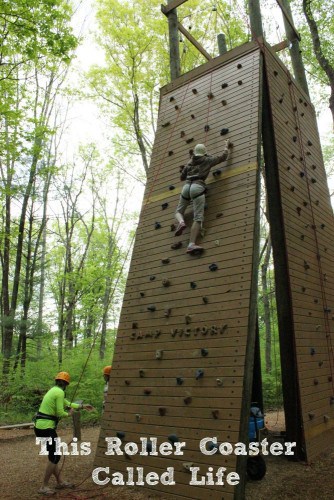 As I said earlier, CampEmerge offers some things to do for the siblings, so my daughter surprised me by saying she wanted to climb the wall.  Knowing that these people work with kids who have all sorts of limitations, I told her yes.  She really enjoyed climbing the wall and immediately went around to the back side to climb the ropes.  This was a first for her, and she really seemed to enjoy it.  She was really tired out that night, though…  😉 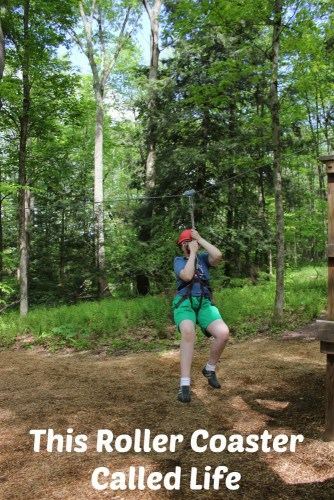 They also had zip lining.  This is a very small zip line, but everyone seemed to really enjoy it!  It did give DS11 a shock, though, as he shouted about the resulting wedgie due to the harness…  He did have fun and went back for many more trips over the couple of days we were there. 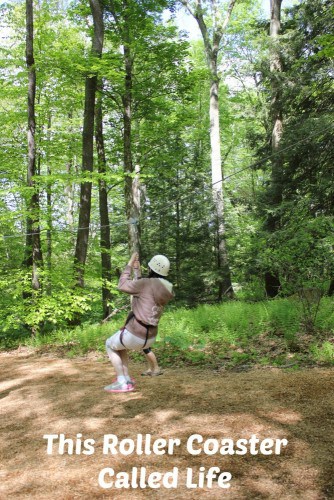 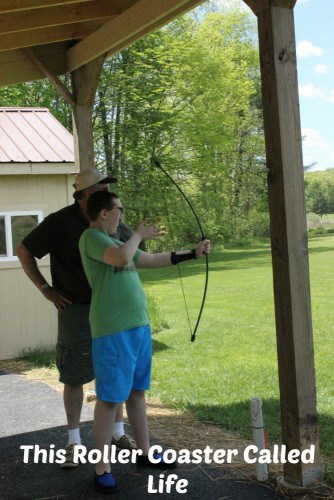 On Sunday, a man came and taught archery.  I was really surprised that this was something that DS11 was really looking forward to!  Maybe, it’s because of the movie Brave.  Whatever it was, he had a great time doing this.

Families who attend CampEmerge pay a very small fee, and most of this wonderful camp is available to those touched by Autism because of donations.  There are a lot of families who enjoy the opportunity to come to CampEmerge to celebrate who they are and not have to worry about explaining their children to anyone.  If you aren’t touched by Autism, you have no idea of the number of stares and questions that some families get due to their child’s behavior.  No, these children don’t act this way because they are spoiled or their parents are bad parents.  Autism is a developmental disorder.  CampEmerge allows these families a break from the harsh reality that the rest of the world can be and interact with other families who have the same problems.

If you would like to give a donation to CampEmerge or find out more information about the camp, please contact Jerry at bte1 @ aol.com (just take out the spaces).  I have not been paid to share this with you.  I share it because my family experienced what a wonderful resource this is for families with Autism, and I hope many others have the opportunity to experience it.