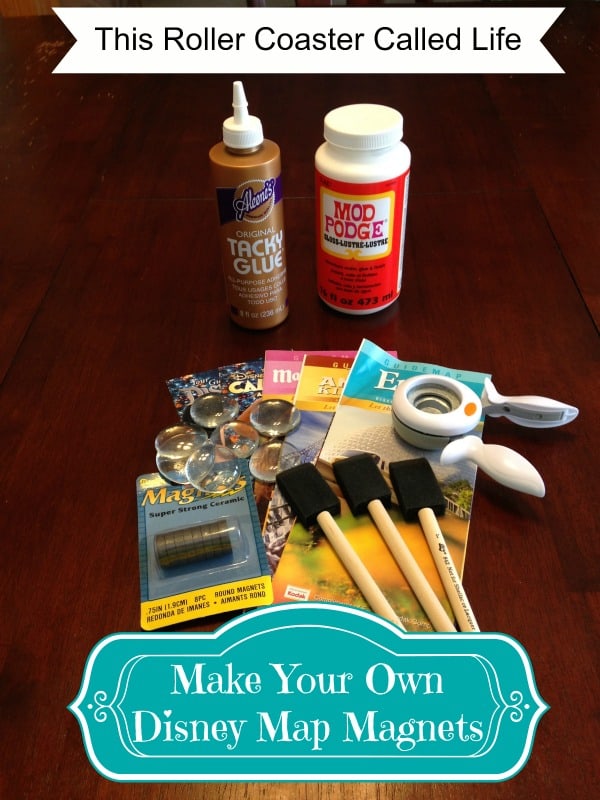 As homeschoolers, we try to look for fun, frugal, and crafty ways to display our vacation memories.  When Erin Glover, Social Media Director at the Disneyland Resort posted the instructions to make Disney Parks Guide Map Magnets, I knew that we would have to try making our own Disney Map Magnets.  The kids and I went to our local Joann’s to see if we could find the supplies that we needed.  After a sizable shopping trip that included things for another project, we headed home with our treasures.  Now, all we had to do was to locate the park maps. 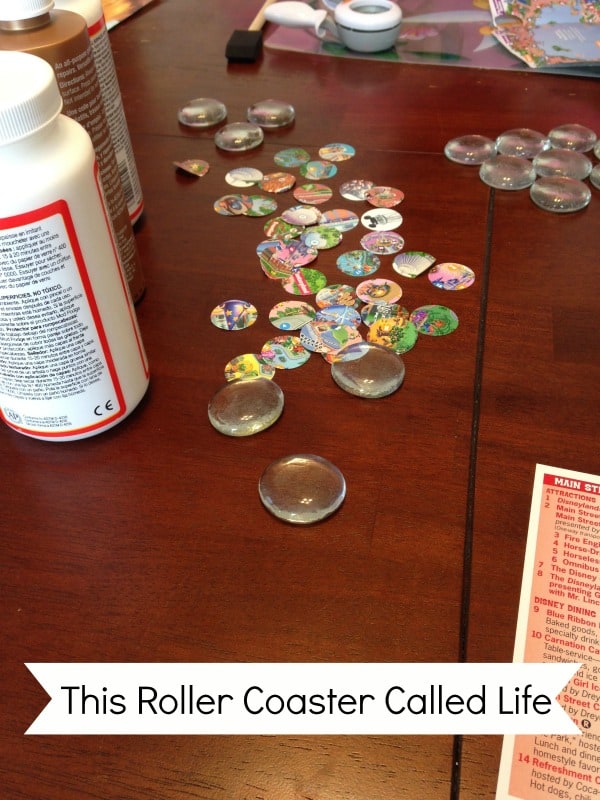 This is just one of the piles of park map circles that we made with our 1 inch circle cutter.  We used two different kinds of maps:  guide maps that we picked up at the parks and maps that we had ordered from the Walt Disney World website long ago.  Yes, one of the park maps that I used still had Mickey’s Toontown Fair on it.  While we searched for just the right place to take each circle from, we discussed different things we had done and want to do at Walt Disney World.  This project was more than just making a magnet; it was about making memories. 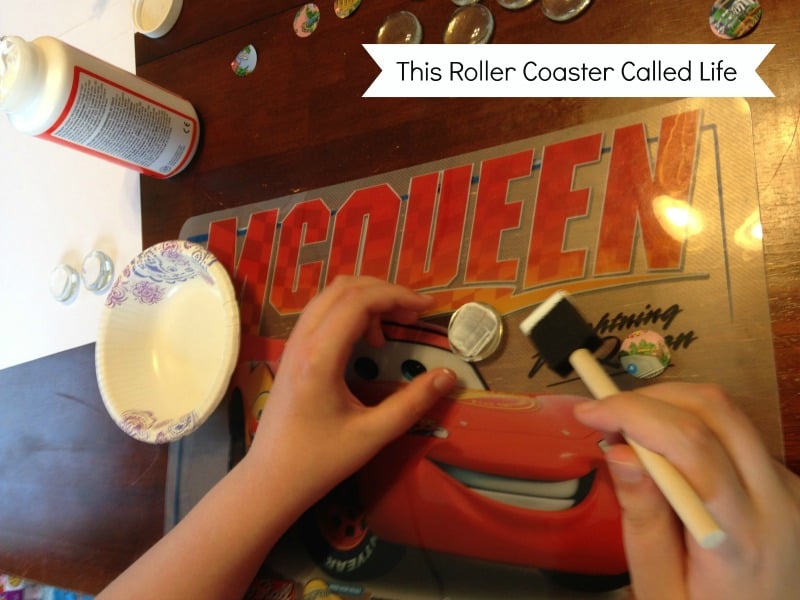 After cutting our circles, we got our foam brushes, Mod Podge, and glass stones ready.  For each glass stone, we brought the circle we wanted to use closer and brushed Mod Podge on the flat side of the glass stone. 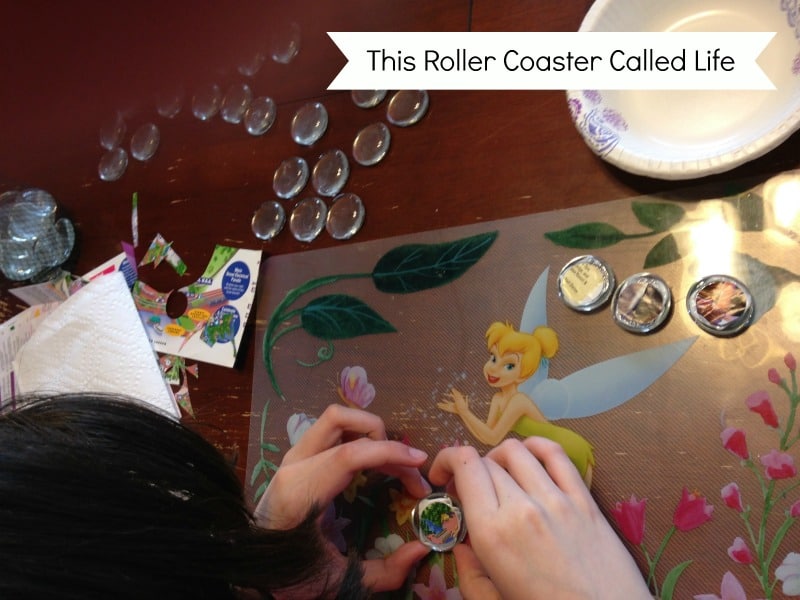 Then, we put the circle on top of the Mod Podge with the photo we want to see facing toward the glue.  Then, we set that stone aside to dry and moved on to the next glass stone. 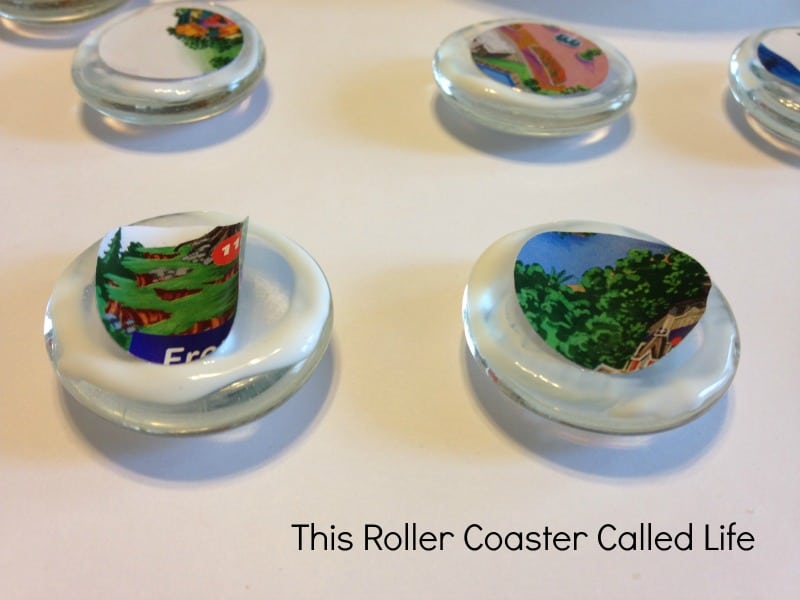 One of the problems that I had was that the heavier paper maps had a problem with curling up, so I would occasionally push them down until the Mod Podge was tacky enough to hold it down.  Yes, I also ended up using too much Mod Podge, and it took longer for it to dry.  We did wait for it to completely dry before moving on. 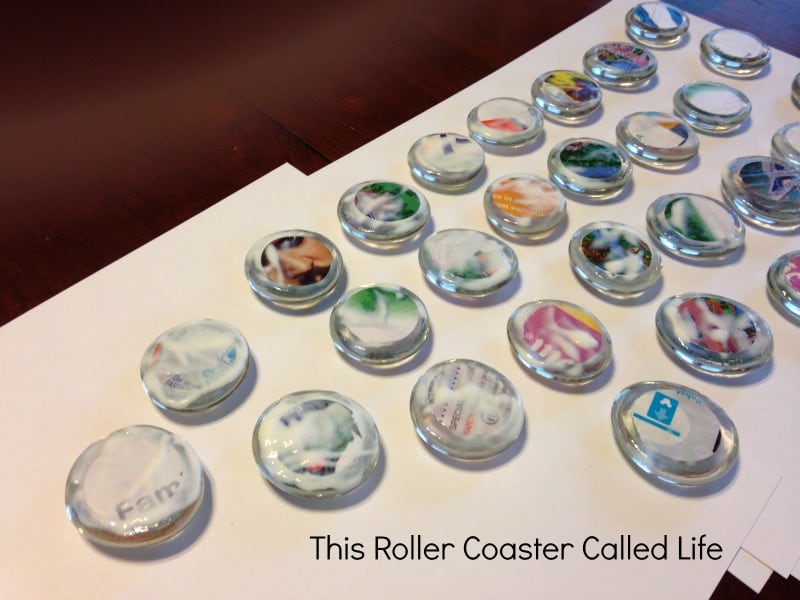 After the Mod Podge was dry, we painted more Mod Podge on top of the map part to protect it before adding the magnet.  I found that we had to be careful in doing this, or the paint brush would brush over the edge of the circle without leaving the Mod Podge on the far side.  So, we painted in circles to make sure that it was sealed all around. 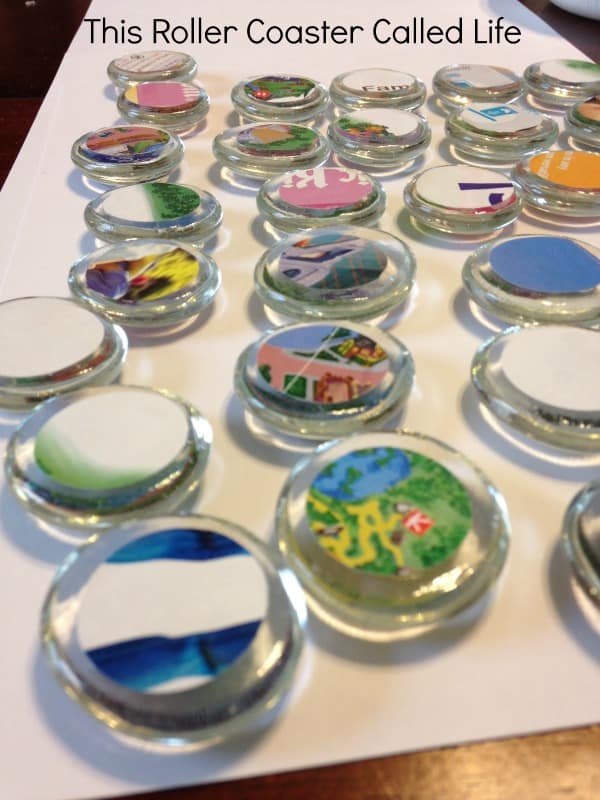 Then, came the wait for the Mod Podge to completely dry.  It did finally, and I went through to pick up each and every one to look at it.  I LOVE how the picture actually looks magnified through the stone.  I can’t thank Erin Glover enough for this craft idea because it was SO much fun! 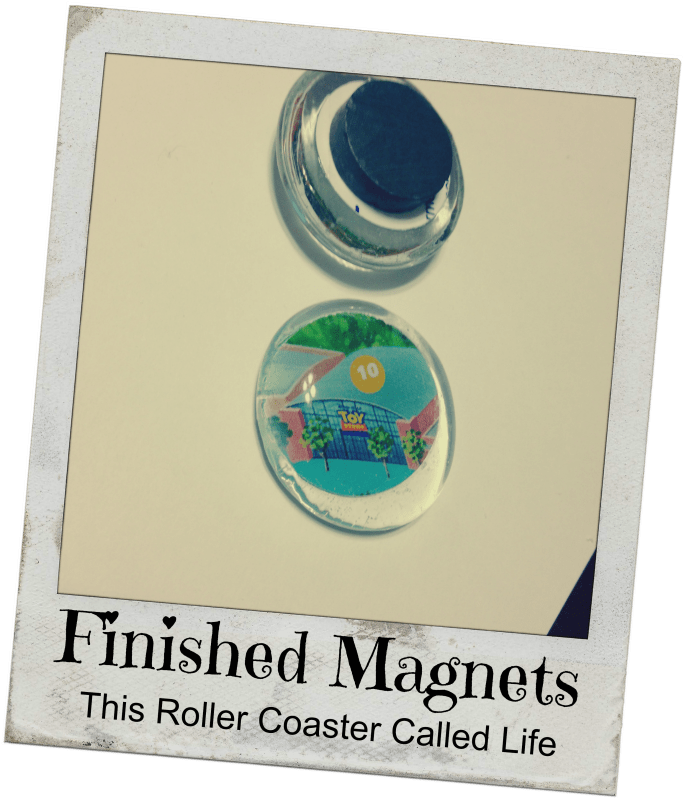 Here is a look at the final product.  After the Mod Podge dried, it was time to glue on the magnet.  After putting the magnet on, I realized that I would prefer a smaller magnet, so I’ll probably wait until I get some smaller magnets to finish all of them.  But this gives you a good idea of how they will look after the magnets are attached.

We concentrated on Walt Disney World, but there are a few that I would love to make from my Disneyland maps!  I’m sure that will make another afternoon of fun!  The other great thing is that this can be done with maps from any theme park.  Shhhh!  I can hear someone asking what other parks there are…  We are hoping to make a trip to Universal Studios when we go on our cruise later this year, so I’m thinking I’ll grab extra maps from there.  Who knows?