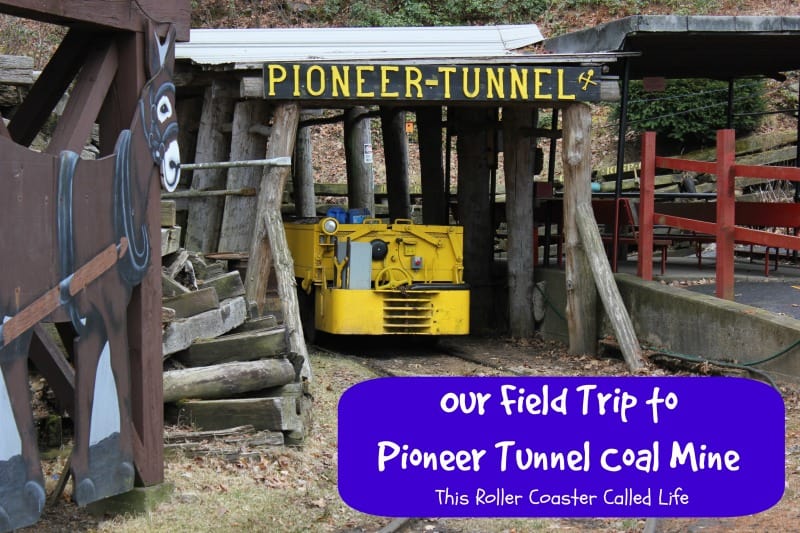 As homeschool students in Pennsylvania, we have to include Pennsylvania history as part of our required learning.  We love history, and there is no better way to learn history than to experience it first hand.  Our part of Pennsylvania is known as anthracite coal country, so we decided to go experience the Pioneer Tunnel Coal Mine recently for a field trip.   The Pioneer Tunnel is located in Ashland, PA.  Make sure to check out the schedule on their website because their hours are limited. 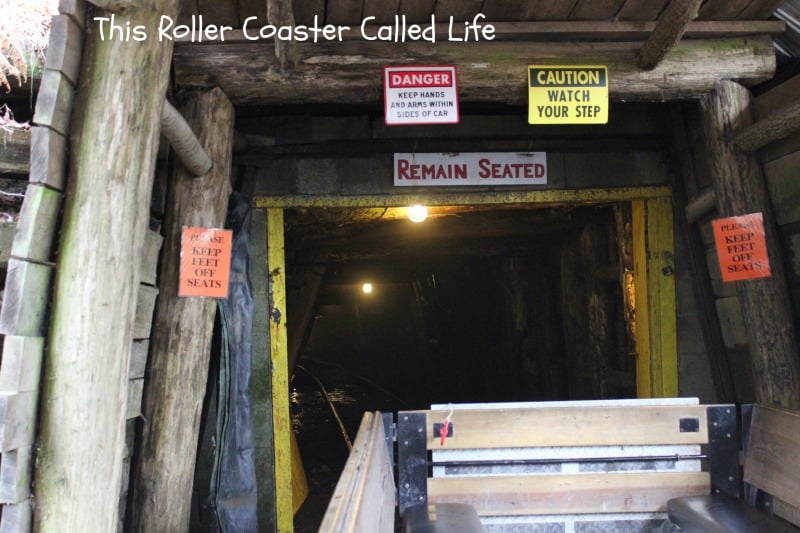 When it was time for our tour to start, we found that we were the only ones on the tour.  This was a good thing as you will see later in this post.  One thing to note is that the temperature of the mine is cold all the time.  This would be a good thing for miners working, but it is not so good for tourists sitting in a mine car.  If you go, you might want to take a jacket with as it is around 50 degrees in the mine.

The coal that was mined from this mine is anthracite.  Not being from coal country, I didn’t really realize that there were multiple types of coal, and I always associated coal with lots of soot and ash.  Anthracite coal is a hard form of coal that is more clean-burning and has the least amount of volatile matter.  It used to be widely used for heating homes, but it is not used much at this time due to higher cost and limited availability.  Having said that, after a cold winter heating with heating oil, I’m thinking coal would have been a lot cheaper.  Actually, it would.  A person I work with said that her family switched to coal a while back, and her heating this winter was a LOT cheaper than fuel oil. 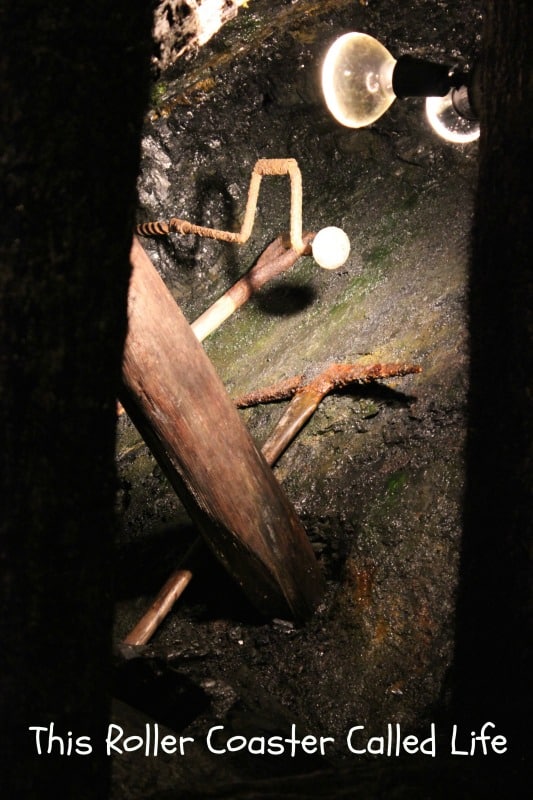 Back to the tour…  We rode along in the mine car for a little while until our tour guide stopped to show us a large vein of coal with some old tools protruding from the work space.  He said this vein was called Mammoth Vein due to its sheer size. 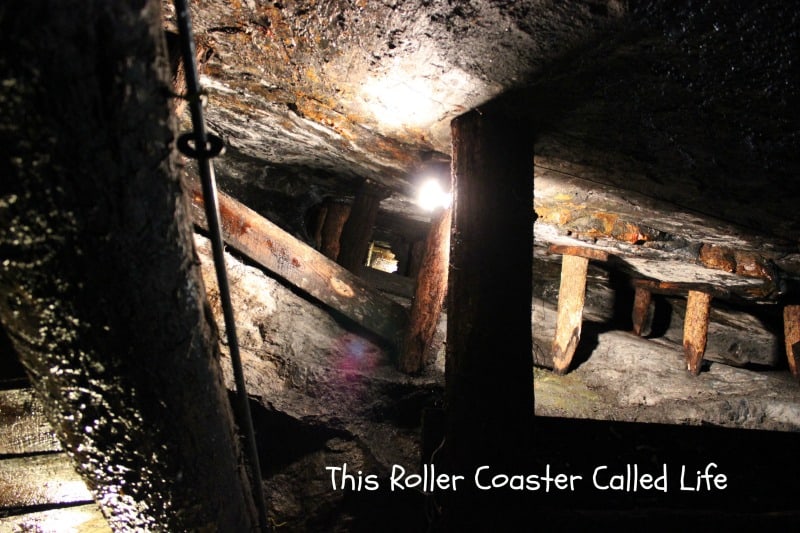 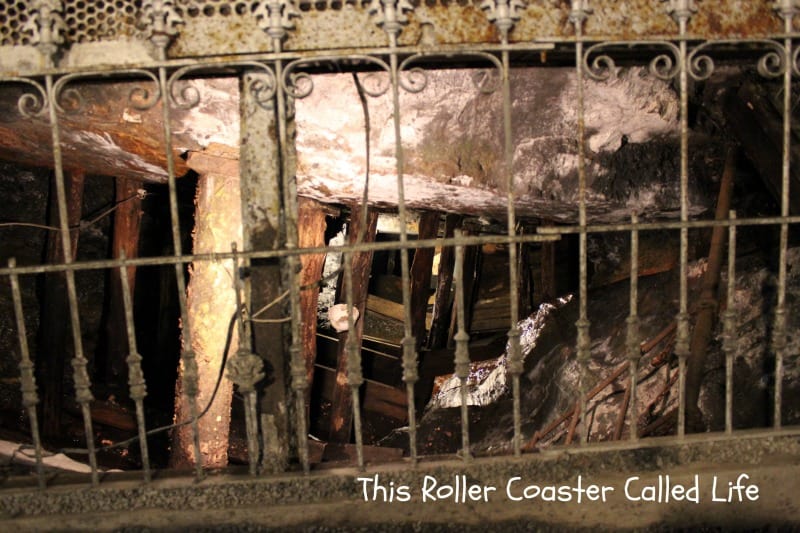 After riding some more, we stopped at some doors and got out to walk the rest of the way.  The path was fairly flat and was an easy walk.  At one point, we were shown a coal chute from the top.  This is the same type of chute as the picture above, but it was a much different experience looking at it.  I guess I didn’t realize how steep the angle was until I was looking down it. 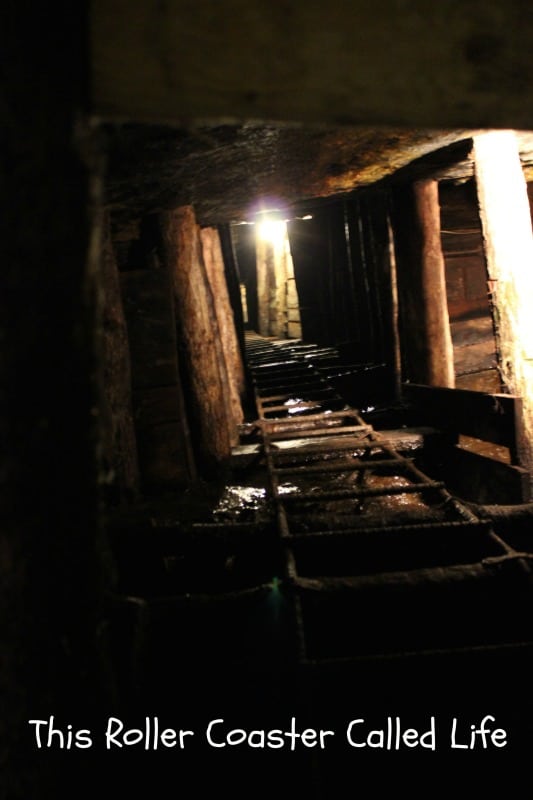 At one point, we were shown the only way out of the mine other than the way we came in.  It is a “ladder” that goes 400 feet almost straight up, and each step is a foot apart.  I sure am glad we didn’t have to evacuate out of the mine. Our guide said that a worker goes up it each year to make sure it is all clear and in working order, in case it had to be used for evacuation.  He also said that the workers do maintenance on the mine all winter long, replacing beams and other things that need to be kept up. 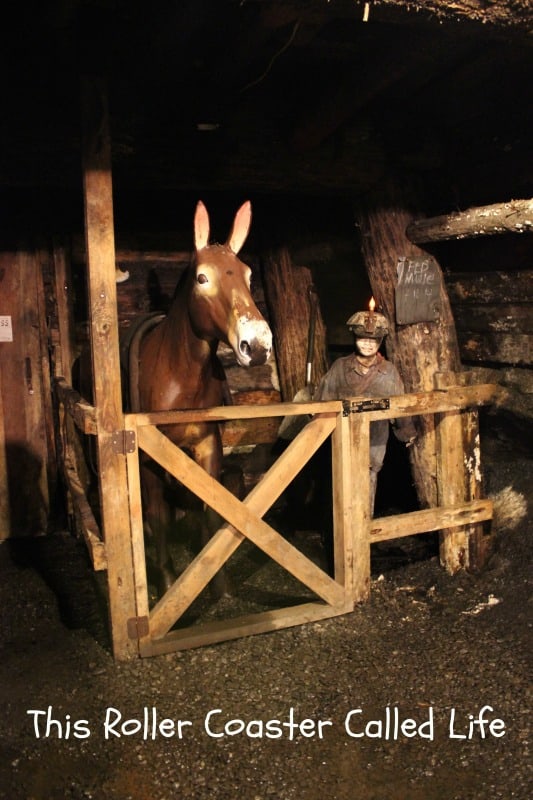 I didn’t realize how valued the mules were over the miners.  Our guide told us that mines hired boys (around age 12) to care for the mules.  Some mines even brought in veterinarians to care for the mules in the mine.  This was before there were hospitals for the miners!  If a boy were caught whipping the mules, the boy would be fired, and the bosses at other area mines would be told in order to keep the boy from working at another mine.  The mules were revered because it cost $200 to buy one.  If they were short a miner, another one could be found on the street corner. 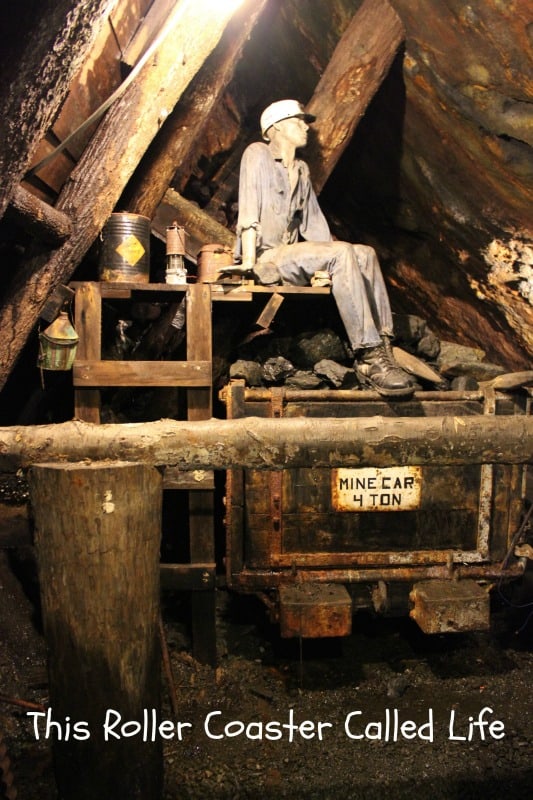 And here is where we find out why it was a good thing that we were on this tour by ourselves…  Notice how this mannequin is sitting with his feet on the edge of the mine car.  This was the only way he could tell that the mine car was filled.  The coal would hit his feet when the car was full.  This area is well lit for the tour, but in reality, at the time the mine was being used, this area was only lit by a couple of lanterns or just by the flame on the worker’s hat.  As the tour guide mentioned “black damp” and how it is a lack of oxygen, I knew something was going to happen.  Before I could say anything, the lights were turned out to show us how dark it would be.  DS11 FREAKED!!!  The tour guide quickly turned the light back on.  He didn’t realize how much this would affect a person like my son, and it took quite some time to get DS11 calmed down.  I redirected his attention to telling me WHY the fire would have “turned off” in the lanterns.  What causes a fire, and what the lack of oxygen would cause.  I felt as bad for the tour guide as he did about the whole light situation.  After DS11 answered the question about what is needed for fire, the guide said that he is a firefighter and that his answer was right.

This was the end of the tour, and we headed back to the train to ride back out to where we started.  I had heard that the Pioneer Tunnel was kind of “hokey”, but I really didn’t feel it was.  It was definitely a good experience for us, and I’m happy that we had the opportunity to see it.  Everyone hears about it when there are mine collapses or explosions, but now that we’ve seen and experienced what it is like to be IN a mine, it makes that news a lot more real.  I truly can’t imagine what it would be like to be stuck underground like that.  It was also nice to see coal in the ground and to see how it is mined.  I think it was well worth the fee.

It turns out that our guide that day is also the train engineer for their narrow gauge train engine, so we’ll have to go again to ride the train.  The train was not running for the season yet, but we will have to go back because DS11 LOVES trains! 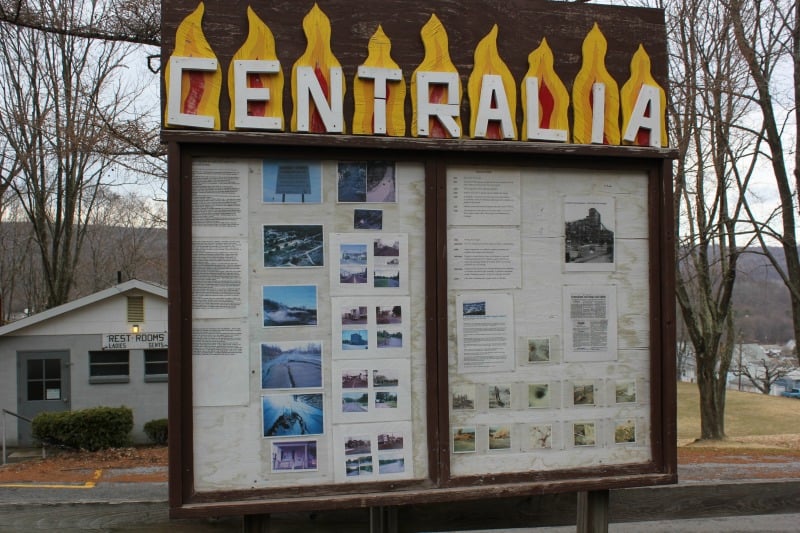 This field trip did not end with just going down in the mine.  We went to the nearby anthracite museum just down the road.  It was interesting to see the thought that went into planning the villages that popped up around the mines to support the miners.  Also, it’s easy to see some of the features mentioned in the display evident in the houses surrounding the mine.

Another thing that came out of this was a discussion about Centralia, PA.  I hadn’t heard about this town before, but did you know there is a town that has been on fire since the early 1960s?  If you read the post I linked to above, you will see that a vein of coal was accidentally lit on fire.  The accounts I’ve read don’t always agree as to exactly what caused the fire, but once it started burning, there was nothing underground to stop it.  Much of the town has been cleared out, but there are a few families who still live there.

This was definitely a good field trip!  Now, it’s time to plan another one…