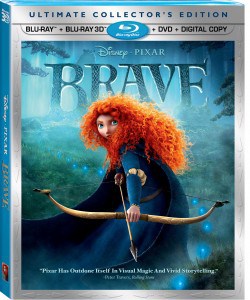 Brave is coming out on Blu-Ray on November 13, 2012.  I was fortunate to received an advance copy to review to be able to share my opinions with everyone.  It is no secret that my family liked this movie.  In fact, my husband says Brave is now his favorite Disney/Pixar film of all because of the beautiful animation.

I received the Ultimate Collector’s Edition set with Blu-Ray, Blu-Ray 3D, DVD, and Digital Copy.  Have I ever said how much I LOVE Digital Copy?  It is incredible to be able to have the movie on an iPad or iPhone!  And the cover art on the outer sleeve…  The lenticular picture of Merida…  The 3D picture just pops out!

Now, let’s move on to what is on the actual Blu-Ray discs.  I do not have 3D, yet, so I can’t comment on that, but I do usually purchase the packs with 3D in case I ever get a 3D set up.  The Blu-Ray disc 1 includes the La Luna short and The Legend of Mor’du Short.  It also includes Brave Old World that chronicles the production team’s exporation in Scotland.  {Yes, they tried Haggis…}  There are more shorts that show a little more depth about Merida, Elinor, the Bears, the Brawl in the Hall.  There is just so much to see and enjoy!

Then, on disc 2, there’s even more!  There’s an alternate opening, deleted scenes, and a COOL short about Dirty Hairy People.  And don’t miss the It is English…Sort of section that helps with interpretation of some of the lines in the movie.  There’s a short about the story behind The Tapestry.

My family really enjoyed all the extras in this collection!  In fact, I wasn’t home the day this arrived, and I was told later that my kids watched every single extra!  We have really enjoyed the Brave Ultimate Collector’s Edition!

Disclaimer:  I received a free copy for the purpose of this review.  I was not compensated in any other way, nor was I required to give a positive review.