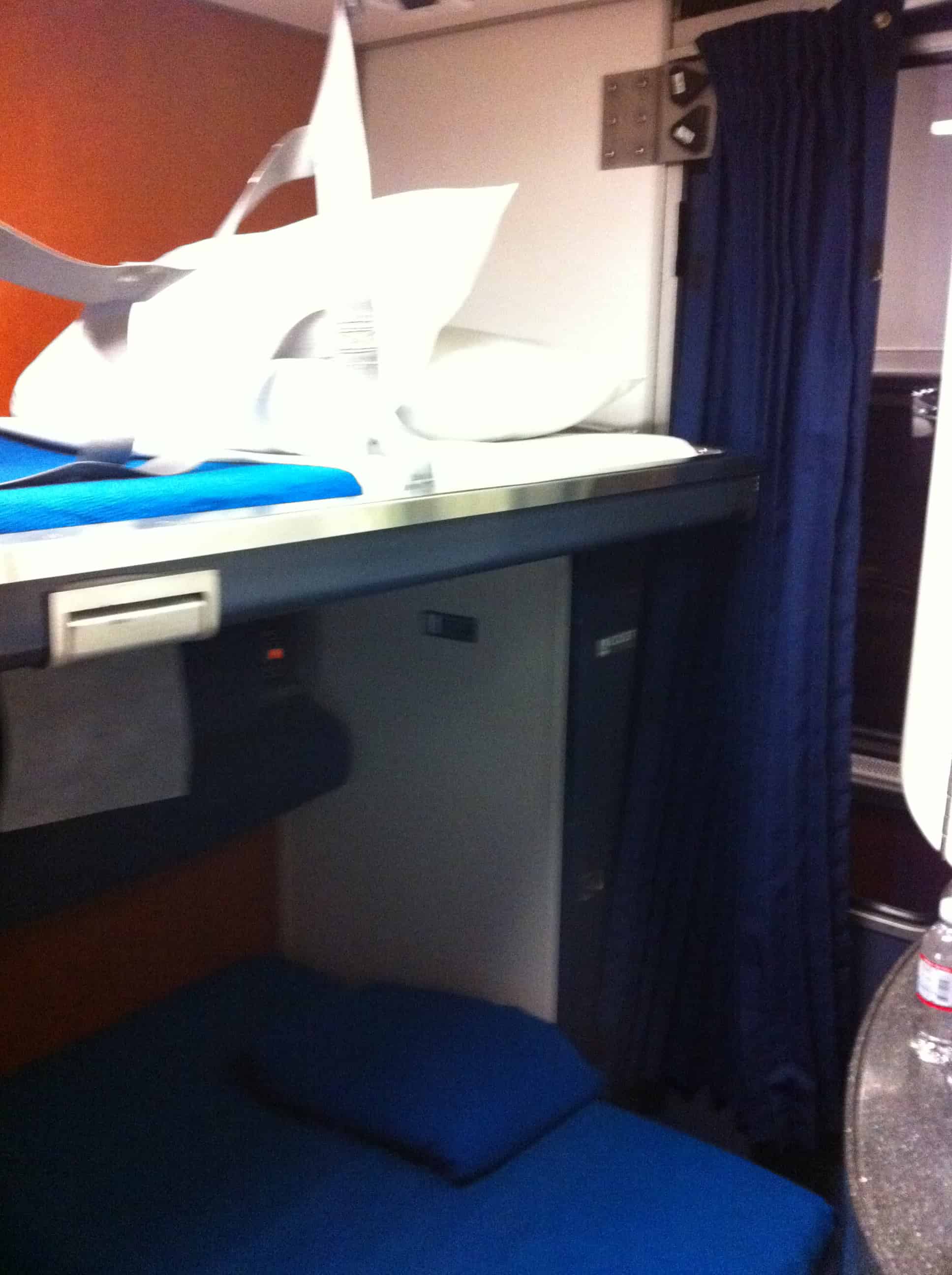 I’ve missed my blogging and Twitter so much!  I actually thought that I would get time to write at least a couple of posts while we were gone on vacation, but I failed to realize how taxing this trip would be.  I missed my dear hubby’s help with DS7 so much, but that is fodder for another blog post.  I will be writing about all aspects of our great adventure over the next couple of weeks, but I must now start at the beginning.

For this trip, we decided to try a new form of travel for us.  The kids and I hopped the Southwest Chief on Amtrak.  We had reserved a sleeper room that had a private “bathroom” and accommodated 2-3 people.  Hint:  If you want to put 3 people in this room, you have to make your reservation through the live agent.

The room was quite small, and in the “night” configuration, it was difficult to even enter the room.  The “bathroom and shower” was an extremely tight space, but it was doable for a short trip.  Meals are included in the price of the sleeper accommodations.

After we got on the train, our sleeper attendant, Mr. Fred, came by to tell us that breakfast was going to start at 5 am and that we would need to be there promptly due to the short amount of time allotted for the meal.  DD11 climbed into the top bunk to sleep, and DS7 and I shared the bottom bunk which seemed just a bit smaller than a double-sized bed.  There was not much room to store carryon baggage, so our bags ended up sitting in the seat all night.  Both kids fell asleep so quickly that it was almost as if they had been rocked to sleep by the train.  I dozed in and out but tried not to sleep too deeply so that I could get the kids up early enough.

When we got to the dining car for breakfast, Mr. Fred mentioned to the other attendants that we were headed to Disneyland.  We were then questioned as to why we were going to Los Angeles.  I told them that was how Amtrak had routed us.  They suggested that we get off in Fullerton, CA.  We could take a cab from there and eliminate the trip to Los Angeles.  I have to say that the “country girl” in me jumped up and down for joy that I wouldn’t have to go to Los Angeles!  How I had dreaded that layover!  Mr. Fred quickly took our checked baggage tags and moved our suitcases so that they would be taken off in Fullerton.  The kids and I gulped down our breakfast and headed back to our sleeper room to get our carryon things together.  Mr. Fred changed our room to the “day” configuration, and we sat and watched the traffic jams on the freeway.

When we got off the train in Fullerton, Mr. Fred got off with us and made sure that we got our suitcases before he got back on the train and pulled out of sight.  I was then left with 2 kids, 4 suitcases, and a strange city.

I had been told by the Paradise Pier Hotel operator to utilize the Yellow Cab company because it was the only one approved by the Disneyland Resort.  What she failed to tell me was that there are 5 cab companies in Orange County that utilize the “Yellow Cab” title in their name.  As luck would have it, we ended up in a non-approved one, but the driver was very nice and appeared to know where he was going.  His rate was actually cheaper than the return trip in an approved cab.

If we had gone with the route that Amtrak had booked us on, we wouldn’t have gotten to Anaheim until about 10:30 am.  Because of the “Pixie Dust” from Mr. Fred, we arrived at the Paradise Pier Hotel, checked in, and were at the gate for Magic Mornings in Disneyland well in advance of the 8 am opening.

Mr. Fred didn’t have to suggest the route change to us.  He went above and beyond in his customer service.  This earns Mr. Fred and Amtrak a “Thumbs Up” on our customer service scale!  We were so thankful that he would take the initiative to help us out!